President Václav Klaus is an expert when it comes to etiquette. He speaks very quietly, forcing his counterpart to listen carefully. No, he says, he is not an opponent of the European Union, but an "EU realist" -- in contrast to the many afflicted with "EU naiveté," those who "passively and indiscriminately approve of everything coming from Brussels."

Klaus, a former professor of finance, probably felt that the members of the delegation from Strasbourg who paid him a visit at Hradjin, Prague Castle, two weeks ago were also victims of "EU naiveté." The chairmen of the political parties' parliamentary groups in the European Parliament, including President Hans-Gert Pöttering, a member of Germany's conservative Christian Democratic Union (CDU), and Green Party politician Daniel Cohn-Bendit, had traveled to Prague in an attempt to appeal to the conscience of Klaus, a known Euro-skeptic. His country will assume the six-month rotating presidency of the European Union on Jan. 1.

It will be the Czech Republic's first time at the helm since it became an EU member state in December 2004. Prague will face especially difficult external conditions in its new role. The financial crisis has also reached the Czech Republic, and the EU has taken steps to mitigate the recession on the continent. Can a country whose president has made a name for himself as a critic of the EU for years even shoulder this responsibility?

"Naïve" Envoys vs. a Prague "Realist"

The conversation between the "naïve" envoys from Brussels and the Prague "realist," at any rate, ended in strife. The parliamentarians gave Klaus a dressing-down, accusing him of denying climate change and climbing into bed with the EU's Irish opponents. "I must say," Klaus said in response to the attack, "that no one has addressed me in this fashion and tone in six years." But he remained unrelenting, insisting that the Treaty of Lisbon would have to be renegotiated.

The body of legislation is intended to reestablish the relative weights of the 27 EU member states' votes in EU Council resolutions and streamline decision-making processes. In addition to the Irish, who rejected Lisbon in a referendum, the Czech Republic is the only member state that has not yet ratified the treaty.

And Klaus, 67, wants it to stay that way. Three weeks ago, he descended from Prague Castle to testify as a witness before the constitutional court in Brno, the country's second-largest city. The judges were being asked to decide whether the treaty violates the Czech constitution.

Klaus was in top form. "Even your jobs are in jeopardy," he told the judges. He argued that the Treaty of Lisbon would allow Europe, removed from the will of voters, to finally triumph over the sovereignty of its individual member states. But the president's appeal left the judges unconvinced.

Klaus has coined a special Czech version of EU critique. It is calm and intellectual, like its prophet, who consistently argues in the name of freedom -- especially the freedom of the markets. He dispenses with bombastic nationalist rhetoric, instead criticizing the EU for its bureaucracy and democracy deficits. In an interview with SPIEGEL, he warned against a "gradual process of standardization." In Klaus's view, Brussels produces a constant flow of ordinances that, though binding on EU members, were never ratified by any parliament.

A Unique Brand of Euro-Skepticism

This stands in contrast to the EU skepticism of other Eastern Europeans, like the Czechs' Polish neighbors, which stems from an easily offended sense of national pride and from historical complexes. Polish President Lech Kaczynski has used this approach to bring many a summit to the brink of failure -- not because he is opposed to the EU in principle, but because he believes that it does not pay sufficient tribute to Poland's special historic role in Europe. When his twin brother Jaroslaw was prime minister, he told his country's partners in Brussels, in all seriousness, that without the death toll exacted by World War II, Poland would have 66 million people today, and that it therefore deserves a stronger vote in the EU. 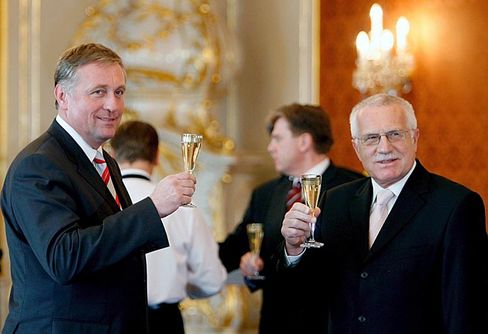 At Prague Castle, however, such pathos on the subject of history triggers head-shaking at best, as does the deep faith in the EU that is behind Kaczynski's speeches. Whenever the Polish president imagines his country in trouble, he expects support from Brussels, such as when Russia imposed a ban on imports of Polish meat three years ago. And for years Poland has called for a common EU energy policy, arguing that it would prevent dependency on Moscow.

"Kaczynski wants Europe to remain pretty much the way it is -- without gay marriage, if possible -- but with his country exerting more influence," says Kai-Olaf Lang, an Eastern Europe specialist with the Berlin-based Foundation of Science and Politics. "Klaus, on the other hand, criticizes the EU from a liberal standpoint. He sees it as a free market, but not as a super-nation by any means."

Occasionally Klaus is unable to resist populist temptation, and when that happens he makes comparisons that exasperate EU parliamentarians. Two years ago, for example, when Vladimir Spidla, the EU commissioner and a fellow Czech, proposed establishing a European fund for the victims of globalization, Klaus said: "This is like communism from the Brezhnev days."

It will be difficult for Czech Prime Minister Mirek Topolánek to assert himself against the obstructionist in Prague Castle. Although the president and the prime minister are in the same party, the middle-class ODS, Topolánek, like many others in his party, made peace with the EU long ago. This is likely one of the reasons why the two leading politicians dislike each other so much.

But strife with the master of the Hradjin isn't Topolánek's only concern. The 52-year-old prime minister owes his office to the votes of a few defectors from the opposition. Without them, his administration would not have a majority in the parliament. What are his chances of even surviving the EU Council presidency politically? Could he stumble during that period, leaving the arena to his adversary in Prague Castle?

Anyone who wants to know how stable a Czech government really is should ask Miroslav Slouf. A Social Democrat, Slouf manages Slavia Consulting and is considered one of the most influential dealmakers in Prague, someone who is often consulted in hopelessly twisted political situations. In these cases, Slouf often negotiates a deal. He invites the adversaries to a meeting in his conference room, where there is a device installed on a bookshelf to detect bugs. The discussions that take place in Slouf's office are better kept secret.

Slouf isn't overly concerned about the current state of affairs. Will the Social Democrats support the weak Topolánek government in the next six months, or will they bring it down at the next opportunity? "Why should we do that?" asks Slouf, a Prague native with the corresponding beer-and-dumpling physique. "All of us want the Czech presidency to go well. For our country!"

Two weekends ago, Klaus launched what is likely to be his last attack on the prime minister for the time being. His friends in the ODS attempted to oust Topolánek and install Prague Mayor Pavel Bém as party leader instead. But the coup attempt failed, mostly because of ODS members from rural areas who supported the premier. The rural regions benefit considerably from structural assistance from Brussels, and these funds have shifted opinions in the party in favor of Europe. Hardnosed EU critics have lost the majority in the ODS, a party founded by Klaus.

But this is far from the end for the president, who remains the Czech Republic's most popular politician by far. After years as honorary party president, Klaus now plans to turn his back on the ODS and launch a new political movement. Its most important characteristic will be its critical stance toward Europe. Even Social Democratic and Communist voters appreciate Klaus's unbending stance toward Brussels. More than half of these voters are also suspicious of Brussels.

His EU skepticism, which dispenses with nationalist pathos, also falls on receptive ears internationally. Klaus could even attempt to cooperate with other EU opponents and forge an international group of EU critics keen to put the brakes on Brussels.

During his most recent state visit to Ireland, the Czech president made time for a private dinner with Declan Ganley, a multi-millionaire who was one of the key sponsors of the Irish No campaign leading up to the referendum over the Treaty of Lisbon with his Libertas party. Using the same programmatic name, Klaus's associates apparently plan to form a Czech branch in the near future.

Klaus ought to get along well with Britain's Tories, as well. Former Prime Minister Margaret Thatcher sealed off her country against dictates from Brussels. A portrait of the Iron Lady is believed to grace Klaus's desk on the Hradjin, and the president is making sure that, in the coming six months, the blue flag with the yellow stars will not be hoisted next to the Czech flag on the ramparts of his castle.