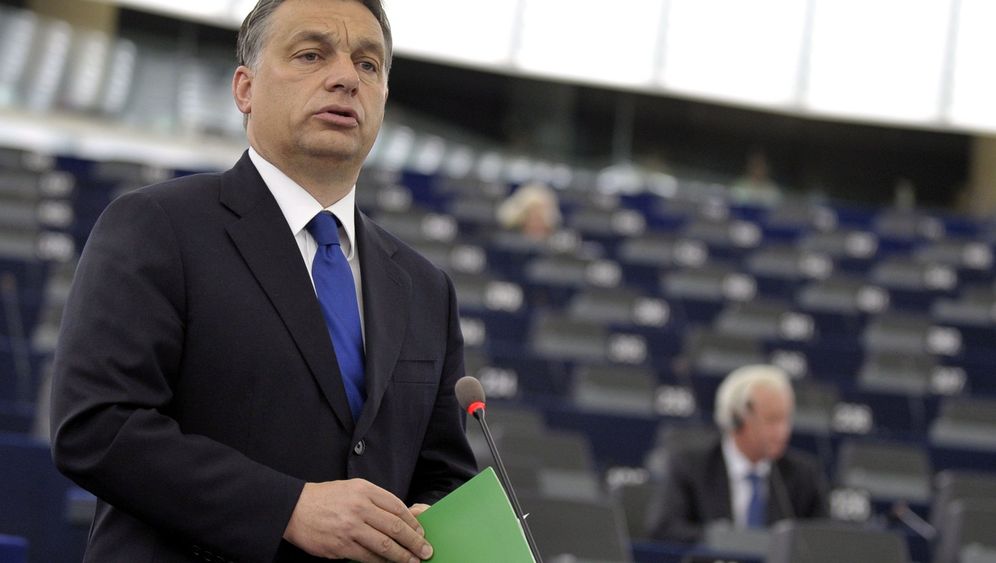 The European Union generally makes a good target, and Viktor Orbán, Hungary's national-conservative prime minister, was back on the offensive in late June, raging against the EU in his usual fashion. "We won't stand for others telling us who we are and what to do" was one of the key sentences in a speech he delivered before the Hungarian parliament in Budapest just days before July 1, the day the country's six-month term as rotating president of the European Union would end.

Hungary has been moving further and further away from EU values and standards -- and that's exactly what Orbán wants. One proposed law would force Hungary's unemployed to perform community service. If their homes are far from where they are supposed to do such work, the law adds that they can be housed in work camps. Likewise, a new electoral law is specifically designed to help Orbán and his Fidesz party (an abbreviation of the Hungarian words for "Alliance of Young Democrats") keep a long-term grip on power. Workers' right to strike and freedom of religion are also under threat in the country.

During Chinese Premier Wen Jiabao's recent visit to Hungary, Orbán had nothing but the highest praise for the Chinese system. In the run-up to the visit, Hungarian authorities had rushed to outlaw anti-China demonstrations.

At the same time that Hungary's EU presidency was drawing to a close, Orbán and his governing party started moving forward with the controversial media law that triggered massive criticism outside Hungary at the beginning of the year. The main thrust of this has been a massive wave of layoffs of people in state-run media organizations.

The scale of these layoffs is unprecedented; by fall, nearly a third of these 3,400 employees will be jobless. In recent days, 550 editors, reporters and technicians have received pink slips. This includes entire bureaus and editorial staffs, such as the entire corps of parliamentary correspondents at public television broadcaster MTV. The layoffs aren't just affecting those who are openly critical of Orbán's government. Indeed, their victims also include many prominent and award-winning journalists whose coverage of domestic and foreign policies enjoys a reputation for its high quality and balanced perspective.

These layoffs have been in the works for a while. The official rationale is that cost-cutting and reforming an "obsolete, inefficient and nontransparent media system" are necessary. Indeed, there's no denying that Hungary's public radio and TV broadcasters have made restructuring inevitable by amassing millions in debt. But, even so, opposition politicians are still describing the move as a "systematic political purge" of the state-run media. "The government is firing anyone who doesn't work in line with its directives," says Attila Mesterházy, chairman of the Hungarian Socialist Party (MSZP).

During a visit to Budapest last week, shortly before the wave of layoffs began, US Secretary of State Hillary Clinton also criticized Hungary's media policy and urged Orbán to preserve freedom of the press and democracy.

'Taking a Lawn Mower to the Media'

Such criticism is likely to fall on deaf ears. For almost a year, Orbán has been radically reshaping Hungary's media landscape -- one blow after another:

Few of the affected are surprised to see Orbán's national-conservative government "taking a lawn mower to the media," as the Internet portal index.hu described it. "They waited until the Council of the European Union presidency was over," says Zsolt Bogár, a former news editor at Kossuth Rádió. "Now they're putting their own people in the media, and all outsiders have to go."

Fear of Losing Their Jobs

Dániel Papp is an example of someone who enjoys the government's blessing. The former employers of the 32-year-old radio journalist include a far-right TV broadcaster with ties to Fidesz. In a public television report broadcast in April, Papp depicted Daniel Cohn-Bendit, the German co-president of the Greens in the European Parliament, as a pedophile. To do so, he altered footage of a press conference Cohn-Bendit had held in Budapest in which he criticized Hungary's new constitution. By way of thanks, Papp has since been promoted to a senior position at MTVA.

Zsolt Bogár, on the other hand, is an example of somebody who does not enjoy the government's blessing. The 37-year-old made a name for himself last year with an act of protest against the media law. The day after the media law was passed, Bogár and his colleague Attila Mong observed a minute of silence on Kossuth Rádió's morning news program. As a result, they were suspended from their jobs and underwent disciplinary proceedings lasting nearly six months. Mong works for a private Internet portal these days, but Bogár got his pink slip last week and is now looking for a new job.

So far, Mong and Bogár's act of protest has been almost the only one of note in the industry. The small size of Hungary's media market makes journalists particularly afraid of losing their jobs. But things might soon be changing. Hungarian journalists are planning ongoing protests in Budapest against the layoffs in public media, including vigils and regular rallies.

For now, though, chances are that these plans won't make much of an impression on the country's prime minister. At a party convention held a few days ago, Fidesz members re-elected Orbán as their party's leader with 99.7 percent of the vote. Speaking at the convention, the prime minister promised to defend national interests "against everything and everyone."

He also added the familiar-sounding: "We won't let anyone meddle with us or tell us what to do."