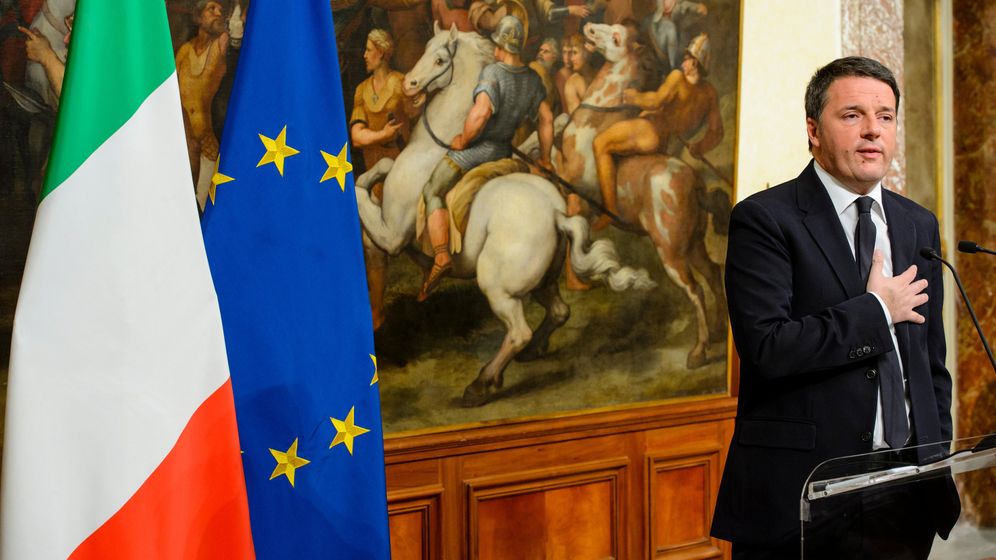 "I lost," a visibly moved Italian Prime Minister Matteo Renzi said around a half-hour after midnight during a news conference at Rome's Palazzo Chigi. "And the post that gets eliminated is mine." On Monday afternoon, Renzi is expected to convene his cabinet, thank them for their work and submit his resignation to Italian President Sergio Mattarella.

It was a clear response in the wake of a clear defeat. Around 60 percent of Italian voters rejected Renzi's proposal to reform of the country's parliamentary system in a referendum on Sunday. Turnout proved extraordinarily high, with around 70 percent of eligible voters casting ballots, rendering any possible excuses moot. The result is clear. And because Renzi had early on tied the result of the vote to his own future as Italy's leader, there was likewise a second clear message sent by the electorate: "Ciao Renzi!"

That message was sent by voters from opposite ends of the political spectrum. The right, the far right and the far left all saw the reform referendum as an opportunity to push its initiator, the unpopular Social Democrat Prime Minister Matteo Renzi, out of office.

One of those who campaigned against the referendum was Rossana Rossanda, 92, an icon of the Italian left. During the 1950s and 1960s, she was part of the leadership of the Communist Party. She was expelled from the party in the 1970s for failure to support key party positions and, together with others who had run afoul of the party, formed Italy's most important left-wing newspaper, Il Manifesto. Like many on the Italian left, the leftist icon Rossana voted against the referendum and against Renzi.

Rossana said the "pack" she had joined forces with was abhorrent to her. It included groups like the right-wing nationalist, xenophobic Lega Nord; the anger-fueled euro-skeptic, anti-everything party led by former comedian Beppe Grillo; and the remnants of those who in the past supported former Italian Prime Minister Silvio Berlusconi. Ultimately, though, Renzi is "just as bad" as them, she says.

Indeed, many members of Matteo Renzi's own Democratic Party voted against him for the same reason, including heavy-hitters like former Prime Minister Massimo D'Alema or Pier Luigi Bersani, who served as the party's chairman for years.

A Revolt of the Abandoned and Forgotten

Above all, though, the high voter turnout and the clear anti-government line underscores just how extremely disatisfied Italians are with state leadership, state authorities and their lives in general. And not without reason. Years of crisis in the country have largely devoured the once strong middle class. As in so many other countries, globalization has created a small class of wealthy winners and a large class of losers. Social harmony in these countries, as in Italy, is based on the belief that children will have better opportunities than their parents did. But with half of the country's young no longer able to find jobs, that dream has now died.

When young Italians gather in bars or on city squares, anger with the state quickly comes to the fore. The vote against Renzi is the rebellion of those who feel abandoned and forgotten. It's a vote, as Renzi said at many of his appearances, "against the political caste" -- just that Italians, particularly young ones, have long since come to see him as being a representative of that very caste. Not much is left of the man who once called himself "Il Rottamatore," the "scrapper" or "demolition man" who vowed to drive out vested interests and ossified political cliques. For now, the discontented and the new scrappers have now driven him out.

Italy's Future? Not Funny at All

It's difficult to make any clear predictions about what the outcome of the referendum will mean. One thing, though, is clear: Italy's banks are likely to slide deeper into crisis (for an in-depth look at the issues facing Italy, click here ). And with the uncertain situation likely to lead to an unwillingness to invest in the country, it seems likely that the economy as a whole will follow. Prime Minister Renzi may be stepping down, but the Social Democrats, together with their current coalition partner, the New Center Right party of former Berlusconi protégé Angelino Alfano, still have a majority in parliament and will seek to remain in power.

Italian President Mattarella could accept Renzi's resignation, but he could also theoretically reject it. It's possible that a transitional or technocrat-led government could be installed until the next parliamentary elections are held in 2018. But it's also possible that snap elections could be held next year.

Should that come to pass, the right-wing populist Lega Nord leader Matteo Salvini and the always outraged ex-comedian Grillo could very well be the front-runners against each other for victory. And that would be a challenge for both Italy and Europe. Because no matter who wins, it is likely they will have to run in opposition to Europe. Any other message is unlikely to lead to election victory in today's Italy.