Hungarian Prime Minister Viktor Orbán began his speech before the annual plenary of the World Jewish Congress (WJC) in Budapest by attempting to downplay the problem of rising anti-Semitism in his country.

"There are places where anti-Semitism claims the lives of schoolchildren and where there's not even any consensus in these place on holding a minute of silence to honor the victims," he said on Sunday, in apparent reference to France, where an Islamist killed four people, including three young children, at a Jewish school in Toulouse last year. "Nothing of this nature has occurred in Hungary."

Tensions were running high weeks before the conference began. Orbán was put on the defensive by a scathing op-ed from WJC President Ron Lauder in Germany's daily Süddeutsche Zeitung, accusing the prime minister of having "lost his moral compass."

While praising the Hungarian prime minister's early political achievements, which included steering his country out from communism into Western institutions like the European Union and NATO, "his second term as premier has been marked by an increasing narrow-mindedness on certain socioeconomic and political matters." And despite having a massive, veto-proof, two-thirds majority in parliament, Lauder alleged, Orbán "panders to the far-right fringe of Hungarian politics," namely, the neo-fascist Jobbik Party, which won nearly 17 percent of the vote in 2010 parliamentary elections.

Dragging Hungary 'Through the Mud'

Lauder's article, and Orbán's subsequent accusation that the billionaire heir to the Estée Lauder cosmetics fortune bore a personal grudge against him due to a lawsuit he had filed against the Hungarian government over a failed business deal, set the stage for Sunday's showdown. In his remarks introducing Orbán, Lauder mentioned several specific examples of anti-Semitic sentiment in Hungary, implicitly challenging the prime minister to address them one by one. Lauder referred to Miklos Horthy -- the authoritarian ruler who allied Hungary with Nazi Germany and presided over the deportation of over 400,000 Jews to Auschwitz -- as "a vicious anti-Semite." Since Orbán's Fidesz party came to power in 2010, municipalities across Hungary have erected statues honoring Horthy with no protest -- and at times active support -- of government figures.

Lauder next condemned the awarding of a prestigious state journalism prize to a TV presenter who had made bigoted remarks about Jews and Gypsies. "Thankfully the government withdrew this prize," Lauder said. "But the fact that it was awarded in the first place is the kind of thing that has us worried."

Lauder specifically called out right-wing journalist, Fidesz co-founder, and Orbán confidante Zsolt Bayer, who earlier this year penned a newspaper column referring to Roma as "cowardly, repulsive, noxious animals," who are "unfit to live among people" and "shouldn't be allowed to exist." Remarking that, "Such words are reminiscent of the darkest era in European history," Lauder said, "Jews are again wondering whether they will have to leave the country, for similar reasons."

Lauder concluded by acknowledging that, "Hungary's international reputation has suffered in recent years," not, as Orbán and his supporters claim, because it is being "smeared by the foreign press," but rather due to "extremists" in the Jobbik party. On Saturday, the day before the WJC conference opened, about 700 Jobbik supporters held a demonstration in downtown Budapest where they railed against "Zionists" who had "subjugated" the "indigenous people" of Hungary. "Jobbik is dragging the good name of Hungary through the mud," Lauder said.

Failing to Confront the Problem

Confronted with so many examples of anti-Semitic incitement, Orbán's speech was notable more for what it left out than what it said. The prime minister never once mentioned Horthy, who remains a popular figure with many Hungarians. His failure to do so was particularly worrisome when he spoke of "the Nazi and Arrow Cross destruction of an authentic Jewish community" in Hungary. The Arrow Cross was a Fascist party that headed a Nazi puppet regime from October 1944 until March 1945. While Arrow Cross members murdered many Jews, the mass deportations of hundreds of thousands occurred during the rule of Horthy, with the active assistance of Hungarian government police and gendarmerie. By failing to mention Horthy in this context -- in effect blaming the tragedy that befell Hungarian Jewry on the Germans and one particular Hungarian political party -- Orbán absolved Horthy and the Hungarian state itself of complicity in the Holocaust.

Orbán made no mention of the Jobbik party, whose provocations he has been hesitant to condemn throughout his tenure. By contrast, in a speech to the plenary Monday morning, German Foreign Minister Guido Westerwelle described the far-right party as standing in opposition to the "community of values" embodied by Europe.

Orbán also appeared to attribute Hungarian anti-Semitism to the alleged failures of the European Union, which has criticized the Fidesz government on a raft of issues, from a restrictive media law to a controversial new constitution, which Orban on Sunday called Hungary's "first, democratic Constitution," implying that the country had operated with a non-democratic Constitution until Fidsez returned to power three years ago. "The economic crisis is shaking Europe to the core, and the unsuccessful crisis management of European leaders is causing increasingly deep frustration, and consuming people's hope," Orbán said.

Reaction to Orbán was mixed. Peter Feldmajer, the president of the Federation of Jewish Communities in Hungary, told SPIEGEL ONLINE that the prime minister delivered a "very open speech" that was intended "not for Jobbik" but the average Hungarian. But less than an hour after Orbán finished speaking, the WJC released a statement that, while thanking Orbán for making clear "that anti-Semitism is unacceptable and intolerable," chided him for his failure to "confront the true nature of the problem: the threat posed by the anti-Semites in general and by the extreme-right Jobbik party in particular. We regret that Mr. Orbán did not address any recent anti-Semitic or racist incidents in the country, nor did he provide sufficient reassurance that a clear line has been drawn between his government and the far-right fringe." 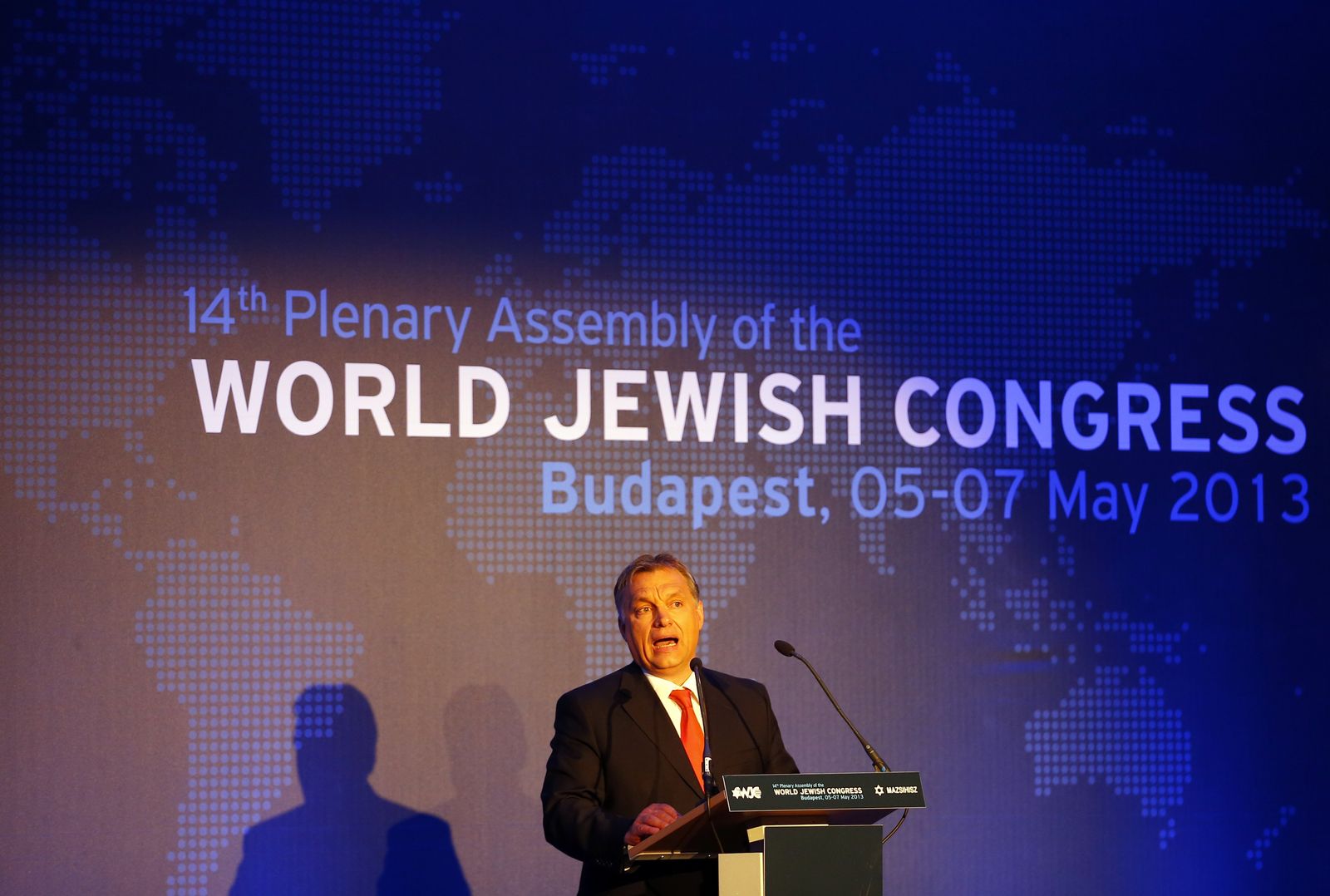 Hungarian Prime Minister Viktor Orban spoke at the World Jewish Congress in Budapest but failed to address the issue of anti-Semitism in Hungary head-on.