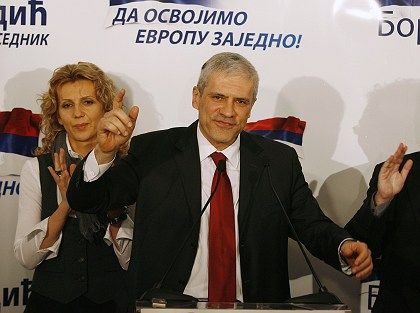 Incumbent Boris Tadic's victory in Serbia's presidential election on Sunday has relieved Western observers but it may actually provoke a fresh political struggle in Belgrade.

Tadic won 51 percent of the vote, narrowly beating his rival ultra-nationalist Tomislav Nikolic, who won 47 percent. According to the Serbian electoral commisson, the remaining votes were spoiled.

Tadic's supporters took to the streets on Sunday night to celebrate the victory, honking their horns and setting off fireworks. "Serbia has shown its great democratic potential," Tadic said in his victory speech.

However, the strong support for Nikolic shows that many Serbs still hold hardline views, particularly on the issue of Kosovo, the Serbian province that is expected to declare independence within the coming weeks. The province has been administered by the United Nations since a 1999 NATO bombing campaign halted former Serb dictator Slobodan Milosevic's brutal crackdown on Kosovo Albanian separatists.

The West sees Tadic's victory as a sign that Serbia has turned away from the reactionary nationalism that fuelled the wars that marked the break up of Yugoslavia in the 1990s. Last week, the European Union signed an interim accord with Serbia covering trade and relaxation of visa rules -- an initial step towards eventual EU membership -- and on Monday the bloc welcomed Tadic's win. "The EU wishes to deepen its relationship with Serbia and to accelerate its progress towards the EU, including candidate status," the Slovenian EU presidency said in a statement. 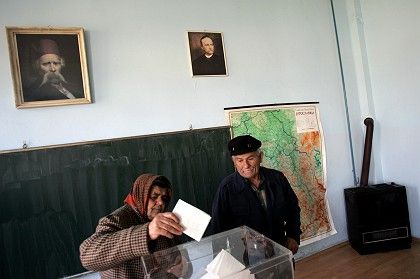 An elderly couple cast their votes in Vladimirovac.

Although both Tadic and Nikolic had vowed not to accept Kosovo's independence, Tadic's priority is to see Serbia pursuing a path towards EU membership. His pro-Europe views are not, however, shared by Prime Minister Vojislav Kostunica, who wants to pursue a more confrontational policy with the West over Kosovo.

Kostunica is in coalition with Tadic's Democratic Party (DS) yet he refused to back Tadic in the presidential election, and he has insisted that if Kosovo declares independence, and this is recognized by the EU, then Belgrade should abandon its bid for EU membership.

Although the office of president itself does not carry a huge amount of political power, Tadic's re-election will strengthen his party's position. "Kostunica will no longer be able to decide everything in this government," political analyst Dragan Bujosevic told Reuters. "The president will now have greater influence."

However, the tensions could also cause the break-up of the coalition, with some analysts predicting that a snap election will be called as soon as Kosovo declares independence.