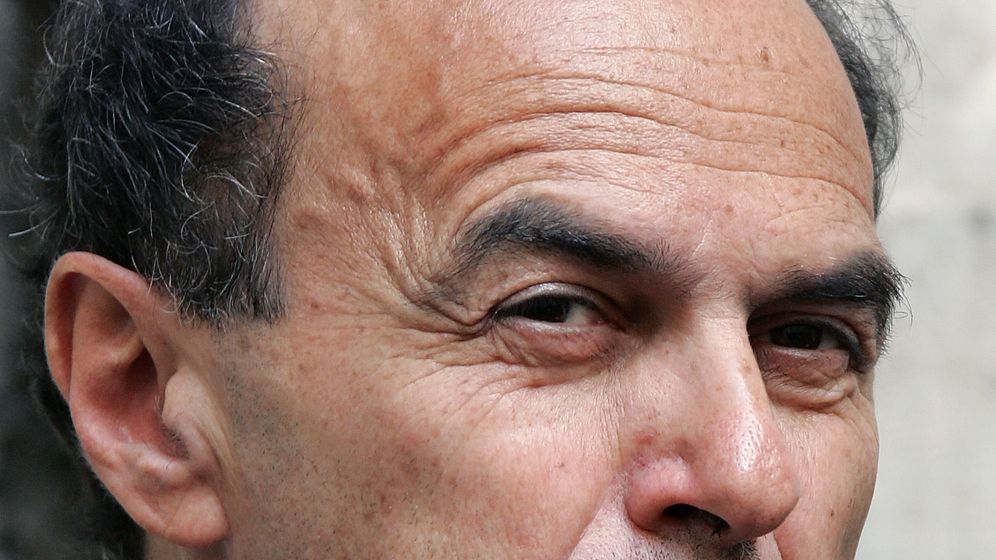 Pier Luigi Bersani, 62, isn't just a political alternative to Silvio Berlusconi. He is also his polar opposite in terms of personality. For example, while Bersani has no qualms about showing his deeply receeding hairline, "Il Cavaliere" keeps his dome covered with surgical implants. While Bersani reluctantly makes low-key and sometimes even awkward public appearances, 78-year-old Berlusconi revels on the big stage and has perfected the skill of enthralling the audience. While the former has been married to the same woman for 30 years, the latter has engaged in countless affairs. Berlusconi is the lavish gesture, the big-letter headline of Italian politics, while Bersani is the fine print.

But how can such an unassuming and careful thinker get ahead in a country enamored of big operas, with their heros and villains? In the campaign for the election to be held on Sunday and Monday, all of his opponents are far ahead of him in terms of media savvy. This applies not only to Berlusconi, but also to Beppe Grillo, the former TV comedian, who fills entire piazzas with his snappy tirades against the political elite and the European Union. Even Mario Monti, the aloof economics professor who is Europe's dream candidate for becoming top dog in the important but unpredictable country, knows how things work and makes TV appearances with a cuddly pooch on his arm.

But Bersani appears to be the only candidate without a clue. Indeed, he is the gray mouse of Italian politics.

Although it defies belief, this gray mouse was ahead in recent polls, an indication that he has a good chance to become the next prime minister in Rome. Though he is more a stagehand than a hero opera tenor, perhaps it is exactly the unspectacular, dignified and boring aspects of Bersani that Italians now want more.

There is a rather authentic photo of Bersani that made its way into many newspapers last year. It shows Bersani sitting at a table in a bar writing down his keynote speech the day before his Democratic Party (PD) held its annual get-together. Bersani probably is just like the man seen in this tourist snapshot, and this is how many of the people who will vote for him see him, as well.

Bersani almost always has a cigar in his mouth, often even when he speaks in his dialectical manner. At such times, he tends to pull out bizarre metaphors whose sense is not immediately apparent, such as, "When it rains, it rains for everyone." Or, when he ends a long debate and exhorts his fellow party members to undertake sensible work, he says: "We aren't here to wipe the sea cliffs dry."

When he delivered a speech upon claiming the helm of the party a few days back, he said: "I am the one who directs traffic." Perhaps that's just how people talk where he comes from: Bettola, a small town of around 3,000 near Piacenza, in the northwestern state of Emilia Romagna, where his father ran a gas station and garage. The area is known for being "red," but of course they are Catholic, too, and little Pier Luigi also spent a few years as an altar boy. But then he studied philosophy, worked briefly as a teacher and soon became a professional "red" -- or perhaps more precisely a "pink" -- politician.

The fact that the party line became more closely aligned with social democracy through all of these permutations fit well for the gray mouse. In the end, the red camp threw its ideological ballast overboard and started championing more liberal economic policies. As a minister in three center-left coalition governments, Bersani was so successful that even the employers' association praised him -- which, in turn, put off those on the far left. Even so, he created a new foundation and won over new supporters for his party, which had been on its way to obscurity for years.

Laying the Groundwork for Change

Last October, Bersani succeeded in the primaries to determine who would be the leading candidate of a center-left alliance made up of his PD party and a small environmental party, Left Ecology Freedom (SEL). Then, as now, his opponent -- Matteo "The Scrapper" Renzi, the mayor of Florence -- had more glamour and rhetorical pizzazz. But fewer votes.

If Bersani ultimately wins the elections, things will probably proceed in the same no-frills, business-like manner. He has announced that his government would "move forward with austerity policies to reduce public-sector debt," but he also said he intends to strive for "a bit more fairness and work." What's more, Bersani has already spoken with other prominent socialist leaders in Europe, including French President François Hollande and Dutch Prime Minister Mark Rutte. In fact, he has even traveled to Berlin -- viewed as the lions' den in Southern Europe -- to speak with German Finance Minister Wolfgang Schäuble. Afterwards, Schäuble's spokesman told reporters it was "a good talk."