The thin ice crunches as the cutter breaks through, chugging along at a leisurely pace to the middle of the fjord. In the wheelhouse, Anders Stigebrandt has his steel blue eyes locked on the screen in front of him. He's in a great mood. It's been another good day of outsmarting nature.

The boat passes a few red wooden houses on the shore beyond the Swedish port city of Uddevalla, where too much industrial sewage has been allowed too drain into the fjord.

The nutrients contained in the runoff of fertilizers, sewage sludge and liquid manure all encourage the growth of algae. When the algae later dies, it sinks to the sea floor, where it decomposes with the help of micro-organisms, which consume the oxygen of the deep in the process. In turn, fish, mussels and crustaceans disappear from these oxygen-poor areas.

The Byfjord on Sweden's west coast serves as Stigebrandt's model for the largest marine death zone ever created by humans -- a 60,000 square kilometer patch of the Baltic Sea floor. Over the years, some 20 million tons of nitrogen and 2 million tons of phosphorus have flowed into the semi-enclosed sea, and it is slowly running out of life-giving oxygen.

Stigebrandt wants to artificially aerate it, and his experiment in the fjord is intended as the start of a much larger project in the Baltic.

Big Plans for the Baltic

His two colleagues jump onto a raft anchored in the water, where two pumps with propellers as large as cement mixers are rotating above the surface. They are pushing water masses into the depths below.

At this location the fjord is around 40 meters (131 feet) deep. From the shore, the sea floor drops rapidly to form a basin, and the conditions are comparable to those in the Baltic Sea, where the water near the surface has more oxygen and less salt than the water below. Due to the difference in salt content, the two layers hardly mix naturally at all.

The propellers whir, and the apparatus sounds like an oversized aquarium. Slowly, the pumps begin to mix the water layers, bringing more oxygen to the deep and more salt to shallower depths. This helps the water to mix better. But Stigebrandt is also hoping to take advantage of another effect: When oxygen is present on the sea floor, it also helps to bind the phosphates that are so damaging to sea life populations to the sediments -- thus reducing the amount of phosphorus found in the water column.

Next, Stigebrandt wants to test the pumps in the Baltic Sea, preferably powered by wind. Swedish authorities have funded his initial experiment with some €230,000 ($302,000). It is estimated that oxygenating the Baltic Sea would require around 100 pump stations, and would come at a cost of around €200 million.

Stigebrandt's biggest critic, Daniel Conley, says he finds the experiment fascinating, but hopes the idea never comes to fruition. "Of course it could work," says the biochemistry professor at Sweden's Lund University. "We sent people to the moon and dried up one of China's largest lakes. If we wanted to, we could oxygenate the entire Baltic Sea." But, he adds, it would likely never be the same.

The oceanographer warns that a lower salt content on the sea floor could drive marine life away. "It's possible the codfish would cease to spawn," Conley says. Furthermore, toxins from the sediment that has thus far been resting on the sea floor could be introduced into the food chain -- poisons such as DDT, an insecticide that was banned in Germany in 1972.

"That's ridiculous," Stigebrandt says, adding that his group has examined the project's risks closely. Far more remarkable, he says, are the results of the testing in the fjord, where sea worms have settled in because there is now enough oxygen for them to inhabit the area. Certainly his critics could have wished for nothing more, the scientist adds.

At the same time, it is also true that immense water circulation can still occur naturally in the Baltic, which is connected to the North Sea via small straits. When wind conditions are favorable, oxygen-rich water flows in, although this has been happening less frequently in recent decades.

In the 1980s, countries that border the Baltic Sea coast began modernizing sewage systems and restricting excessive fertilization by farmers. The result was that fewer nutrients have been drained into the water, but it is likely the state of the inland sea will only change slowly over the next 50 to 100 years. The intent was to make the waters ecologically sound again by 2021.

Advocates of the artificial oxygenation like Stigebrandt argue that waiting alone won't suffice and urge that action be taken. Similar experiments involving pumps are being conducted in the Gulf of Finland. And in the Stockholm archipelago, another group is testing a chemical in the water that has been used to purify sewage. Nevertheless, none of these projects eliminates the root cause of the glut of nutrients in the water.

As to the question of what the effects the project would have on the ecosystem, both supporters and critics are cautious. The sea is unpredictable, they say. 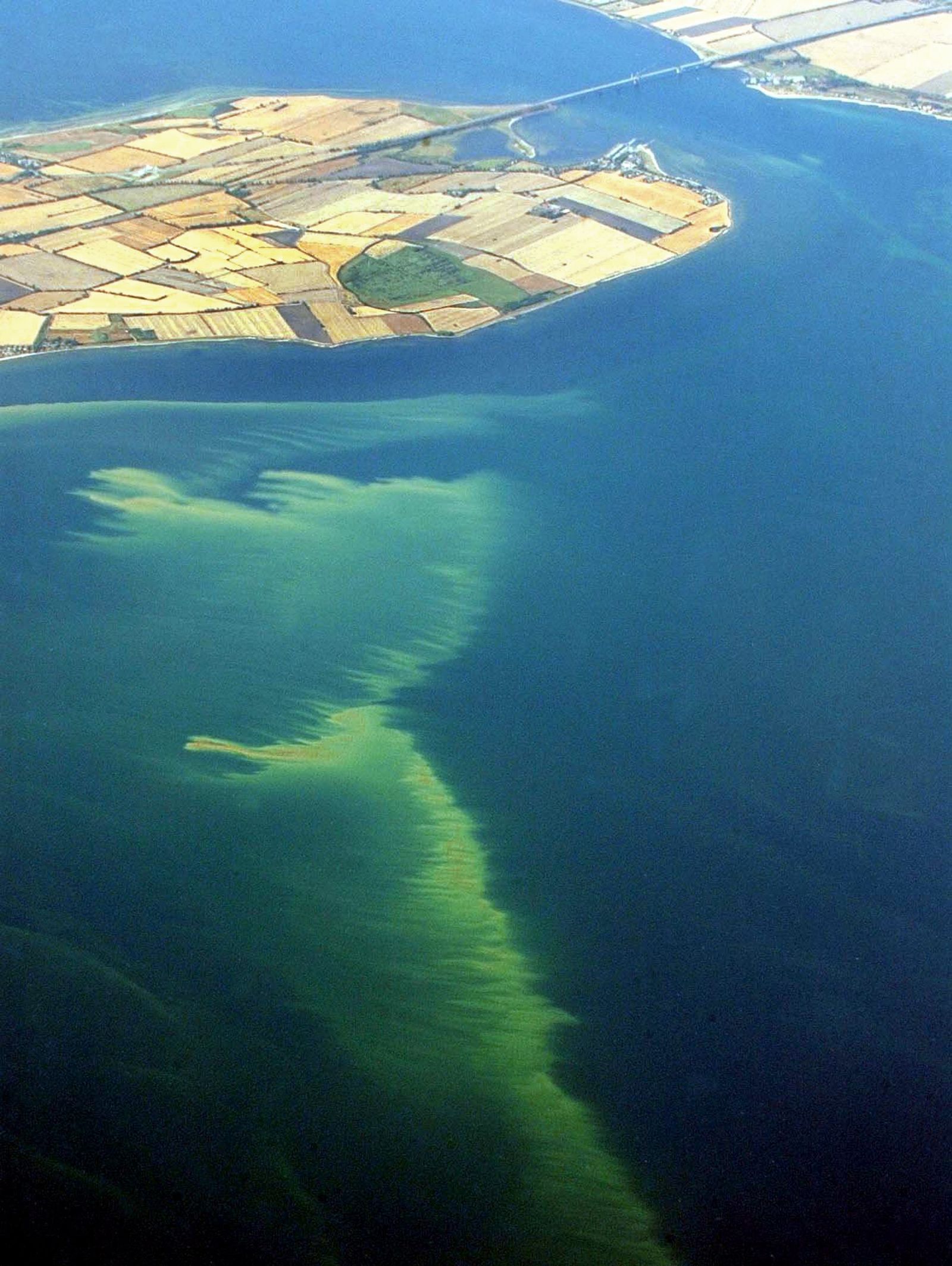 A massive algae slick forms in the Baltic Sea off Fehmarn Island near the German-Danish border.