Spanish star judge Baltasar Garzón came on foot to his execution on the first day of his trial. The proceedings, which were to put an end to his celebrated career, were heard this week in Madrid before Spain's Supreme Court. Garzón became famous for his dogged pursuit of dictators and others who had committed crimes against humanity across the world. But now he was the one standing trial -- for having attempted to dig up the darkest secrets of the powerful in his own country. Now he must pay the price.

As in Germany, the worst accusation that can be leveled against a judge is "perversion of justice." This judge, who is as vain as he has been successful, is accused of having committed "sustained perversion of justice" by using controversial methods in his efforts to shed light on a corruption scandal that has absorbed the Spanish political establishment for years. He had conversations between suspects -- thought to belong to a network of corruption -- and their lawyers secretly taped. In Spain, as elsewhere, such a violation of rights is only permitted in extreme cases.

The victims of these secret recordings struck back by filing a joint complaint against Garzón. And they have powerful friends. Indeed, among those accused in the bribery scandal are some in the upper ranks of the conservative Popular Party, whose leader, Mariano Rajoy, became the country's prime minister in late December. The main suspect in the case is Francisco Correa. Investigators dubbed the case the "Gürtel Affair," taking the German translation of Correa's last name, which means "belt."

The plaintiffs' lawyers employed a special provision from Spanish procedural law to file a complaint "from the people," which allowed the action against Garzón to go forward. The public prosecutor's office, on the other hand, doesn't see anything about Garzón's actions that warrants criminal prosecution and has instead argued for his acquittal.

On Tuesday, the first day of oral hearings against Garzón before the Supreme Court in Madrid, his supporters welcomed him outside the Supreme Court building in Madrid at 10 a.m. with placards, clapping and chants, such as: "The perverse world of Spain (where) the corrupt and the fascists allow a judge to be put on trial."

Garzón then entered the ostentatiously adorned courtroom, the site of several major cases that he himself had been a part of. There, he was met by colleagues from the National Court next door, who had come in a show of support. For almost 23 years, Garzón had served as an investigating magistrate in the National Court in cases against terrorists, drug gangs and organized crime. But, in May 2010, he was indefinitely suspended from his position.

Tuesday afternoon, Spain's best-known judge was forced to put aside the black judge's robe with the white lace cuffs that he had worn into the proceedings and been allowed to keep on during the morning's proceedings. He was also forced to move from the wine-red velvet seat he had enjoyed next to his defense attorney. Standing across from the seven judges trying his case, he was asked to state his name and age. Then, for two-and-a-half hours, he found himself in the embarrassing position of sitting in the chair reserved for the accused answering questions. He compared the feeling to being brought before a firing squad. As he subsequently explained to his relatives with a bit of gallows humor, "I asked for someone to remove the blindfold from my eyes so I could look straight forward."

Should the Supreme Court judges side with those who brought the complaint, it could mean the end of Garzón's career because he faces a maximum sentence of being removed from the bench for 17 years.

But, even if he is acquitted, the chances are slim that he will ever be allowed to hunt down criminals again from his office in the fifth chamber of the National Court. Indeed, this trial was just a prequel to the trial against him that will start next Tuesday in the same ornate courtrooms of the Supreme Court, which is housed in the former convent known as the Palacio de las Salesas.

These back-to-back trials have led Gaspar Llamazares, the former head of the leftist coalition United Left and a member of the Communist Party of Spain, to describe it as having a cluster-bombing effect. While demonstrating in support of Garzón outside the courthouse, Llamazares said: "If they don't get him for the one thing, he'll fall over the next one."

In the second case, Garzón is once again being accused of perverting justice for responding to complaints of victims' relatives by investigating what happened to the roughly 114,000 regime opponents who disappeared during the dictatorship of General Francisco Franco, who ruled Spain from 1936 till his death in 1975. Luciano Varela, the Supreme Court magistrate spearheading the case against Garzón, accuses him of "inexcusably ignoring" the amnesty law of 1977, which forgives all political crimes committed during Franco's dictatorship.

Varela is one of the seven judges who will pass judgment on Garzón for the wiretapping affair. What's more, another one of the seven judges is leading yet another probe against Garzón. He is suspected of corruption for allegedly accepting money from Banco Santander, Spain's largest bank, as fees for seminars he led at New York University.

Reed Brody, a lawyer and spokesman for Human Rights Watch in Brussels, says that it is a "bitter irony" that Garzón "is being prosecuted for trying to apply at home the same principles he so successfully promoted internationally." Indeed, Garzón's foreign colleagues have celebrated him as representing the global conscience since he issued an international warrant that led to the 1998 arrest of former Chilean dictator Augusto Pinochet in London. The case was the first to apply the principle of universal jurisdiction for crimes against human rights. As Luis Moreno Ocampo, the head prosecutor at the International Criminal Court (ICC) in The Hague, has said, the case was "groundbreaking" in terms of bringing an end to exemption from prosecution.

Though his investigations of Argentine junta leaders, Garzón helped to end Argentinean amnesty laws that protected military officials who had committed crimes against humanity. More recently, he stoked the ire of many in the United States by trying to call US President George W. Bush and six advisers to account for abusive interrogation techniques practiced at the prison camp in Guantánamo Bay. Documents released by the whistle-blowing platform WikiLeaks have revealed that US Embassy officials made repeated attempts to get Spanish authorities to rein in Garzón's investigations.

ICC prosecutor Ocampo, though, insists that the world needs judges like Garzón, ones that are fearless when it comes to confronting the powerful around the world. After Garzón was forced to vacate his office in the ugly purpose-built structure in the heart of Spain's capital, Ocampo hired him to serve as an adviser to the ICC on Latin American issues. It was, ironically, this position that led to the criminal accusations that three ultra-right Francoist organizations, including the openly fascist Falange Española de las JONS, leveled against Garzón.

The charges resulted from Garzón's decision to break a taboo -- and the unspoken pact of all parties when it came to the Spanish Civil War and the Franco dictatorship. He chose to ignore the Spanish amnesty law of 1977 in favor of international law -- and allow investigations into the tens of thousands of Franco opponents who went missing.

Still, the witch hunt against Garzón only really got going in earnest two years ago, when he brought to light illegal financing activities related to the Popular Party. At that time, even judges with reputations for being progressive saw an opportunity for finally getting rid of Garzón. For the crusading judge had also made himself an unpopular figure among the socialists on the other side of the political divide. In the mid-1990s, he led a series of investigations into whether senior Interior Ministry officials in the governments of Socialist Prime Minister Felipe González (1982-1996) organized death squads against ETA, the Basque separatist militant group.

Indeed, by picking fights with people across the entire political spectrum, the gung-ho investigating magistrate has earned the nickname "the prince," an unflattering nod to Machiavelli's ruthless and conniving character, and stoked the jealousy of many.

Don't Pick Fights with the Powerful

In the eyes of Garzón's supporters, Spain's Supreme Court has moved forward with the wiretapping case so as to not expose itself to international criticism. Indeed, it might mark the first time that an investigating magistrate is being tried before the Supreme Court for ordering potentially unlawful surveillance activities.

When speaking in his own defense this week, Garzón spoke in a hoarse and raspy voice brought on by the flu. He repeatedly asserted that he had ordered the wiretapping of the leaders of a "criminal organization" because "there was no other possibility" for preventing them from continuing their money-laundering activities from within their cells. He also added that officials with the special prosecutor's office charged with investigating corruption and police misconduct had told him that the prisoners' lawyers were playing "a key role" in these activities. "I didn't have the defense lawyers but, rather, the incarcerated investigated," Garzón asserted. On the second day of the trial, witnesses even confirmed that Garzón gave instructions for the parts of the conversations dealing with defense strategies in the tape transcripts to be redacted.

On Thursday, Garzón delivered his closing argument and proclaimed his innocence. The judges will deliver their verdict within the coming weeks. Hardly anyone believes that the Supreme Court judges deciding the case will be satisfied with merely having forced Garzón to go through the humiliating ordeal of sitting on the bench reserved for the accused.

When it comes to the Gürtel Affair, one of the biggest corruption scandals in the history of Spain's democracy, no one has yet been convicted. The case of Garzón, the star judge, could be a warning to his colleagues: Don't pick fights with the powerful. 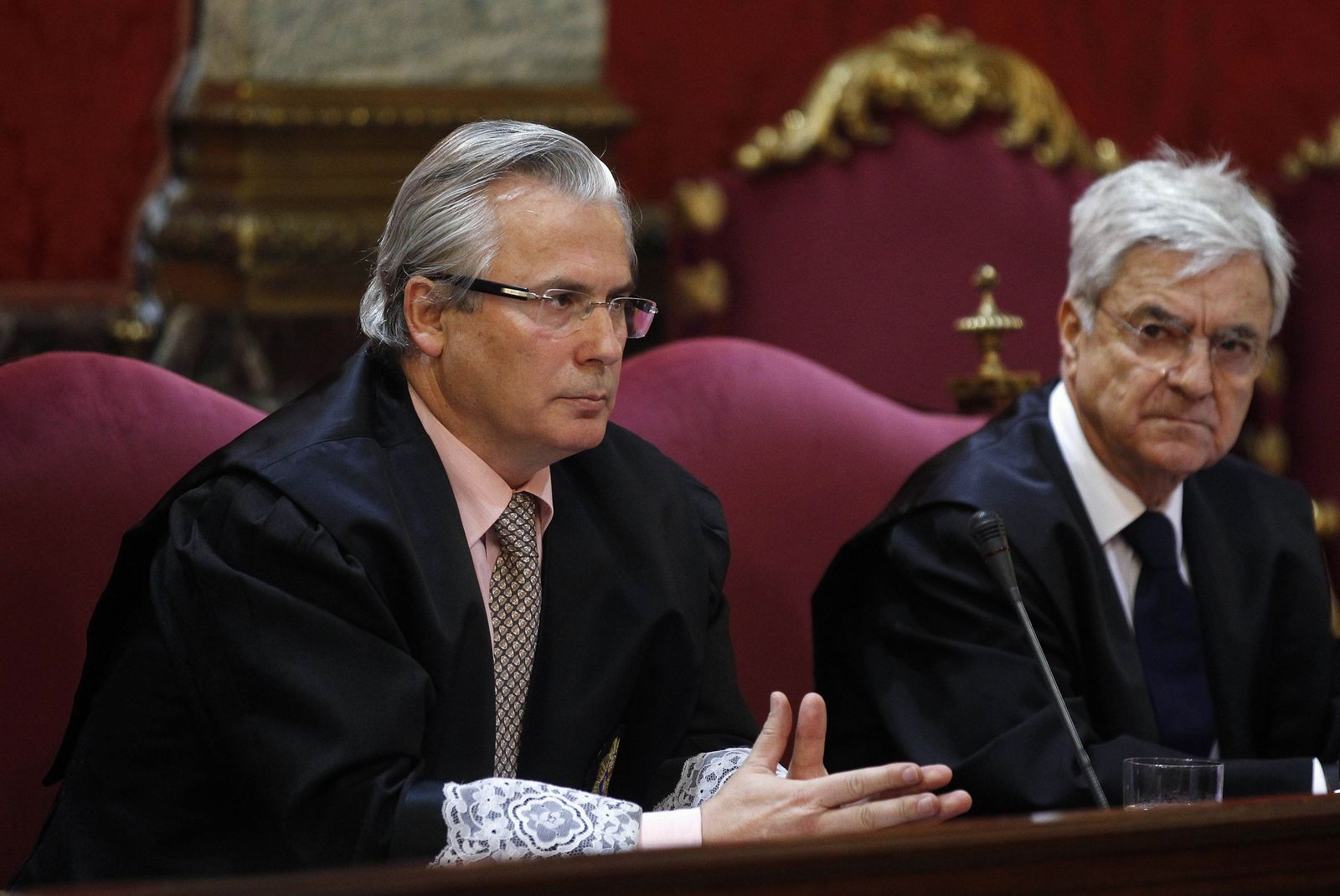 Baltasar Garzón (left) sits with his lawyer at the start of his Supreme Court trial in Madrid.