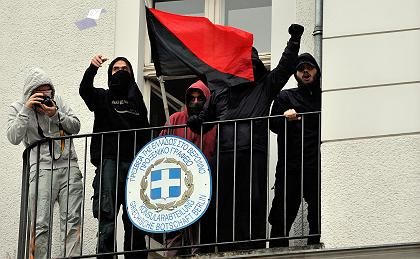 Demonstrators on the balcony of the Greek consulate in Berlin waved a black and red flag and threw leaflets.

A group of demonstrators occupied the Greek consulate in Berlin on Monday morning in protest over the fatal shooting of a 15-year-old boy by Athens police on Saturday that triggered the worst rioting Greece has seen in 25 years.

Some 30 people pushed their way into the lobby of the consulate at Wittenbergplatz in western Berlin at around 9.40 a.m. local time, said SPIEGEL TV reporter Martin Heller, who is on the scene.

Around 120 German police cordoned off the area outside the consulate and negotiations are underway with the demonstrators, who were behaving peacefully and had made no demands, police said. At around 11 a.m., 10 people wearing hats and scarves to mask their faces appeared on the balcony of the consulate and shouted: "Police Assassins" and "Alexandros, That Was Murder!"

The Greek embassy in Berlin, located in the east of the city, has not been occupied.

One of the demonstrators told the German news agency DPA that the demonstration was in protest against a Greek state that was responsible for the death of the teenager, identified as Alexandros Andreas Grigoropoulos.

The protestors removed the Greek flag from the façade of the consulate building and draped a banner from a window that named the victim and said "Murdered by the State."

Two police officers have been charged over the shooting -- one with manslaughter and the other as an accomplice.

A police statement said one officer fired three warning shots after their car was attacked by 30 youths in Athens' volatile Exarchia district. Police claim the teenager was hit by a richoteting bullet, but witnesses told Greek TV he took aim at the boy.

The shooting sparked violent protests in Athens and other Greek cities over the weekend that reflected growing public disenchantment with the government's economic policies.