The first wave of strikes are set to hit France on Tuesday at 8:00 p.m. with railway workers' trade unions getting things started. Then, on Wednesday, Parisian public transport workers who are trade union members will join in, as will the employees of energy company EDF and natural gas provider GDF. Lawyers and hospital employees have also announced that they will go on strike next week.

French train, public transportation and gas and energy sector workers are already organizing their second nationwide strike in a month. They hope their strikes will prevent, among other things, the reform of the French pension system planned for about one million civil servants. Unlike the strikes in mid-October, there is no time limit on the new round of strikes.

The strike wave is a reaction to the reform of the pension system planned by French President Nicolas Sarkozy. If Sarkozy has his way, the majority of employees will henceforth pay into the public pension fund for 40 years as opposed to 37.5 years, as is currently the case. Train conductors, public sector employees, workers at the public gas company and artists at the Paris opera house would all be affected.

Judges and lawyers are protesting against a reform measure that entails the closure of numerous courts. Hospital employees want to see a 4-percent salary raise.

In addition to the abolition of special pension payments, Sarkozy has announced other sweeping changes for the civil service. He plans to slash 20,000 jobs next year -- reason enough for postal and telecommunications employees to take to the streets on Nov. 20.

The pressure from the street could reach the level it last reached 12 years ago, but the government has remained unrelenting until now. Prime Minister Francois Fillon said about the reform of the pension system: "There is no other solution if we want to secure pensions. The status quo is no longer possible." 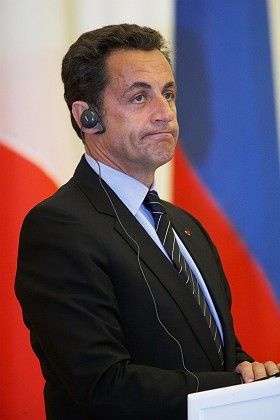 President Sarkozy said at a press conference: "We were elected to change France." The pension privileges that have existed until now are no longer fair, he argued, insisting that retaining them would lead to greater proverty while simultaneously endangering France's economic competitiveness. Sarkozy also warned against violence: "Be responsible and stay calm," he appealed to those on strike and to commuters.

Meanwhile Bernard Thibault, the head of the powerful CGT trade union, is accusing Sarkozy of stubbornly blocking every possible agreement. Seven trade unions have closed ranks with CGT. As a result hardly any subways will be running in Paris until the weekend.

Protests by French students are also threatening to flare up anew: The students are protesting against a reform measure that will give individual universities more autonomy and allow them to cooperate more closely with private companies. The students are concerned the state may withdraw more and more from public education. They want to boycott lectures and seminars in parallel with the strikes by civil servants.

Moreover, several left-wing student associations want to close ranks with the train conductors on Tuesday evening by occupying train stations and shutting down those parts of the public transportation system not affected by the strike. Last year university students succeeded in preventing a loosening of layoff protection laws by means of mass protests.

Sarkozy is still backed by the majority of the French population in what amounts to the toughest test of strength he has encountered during his time in office so far. Recent polls show 77 percent of the French support his plan to abolish the pension privileges of civil servants, while only 21 percent support the strike wave. 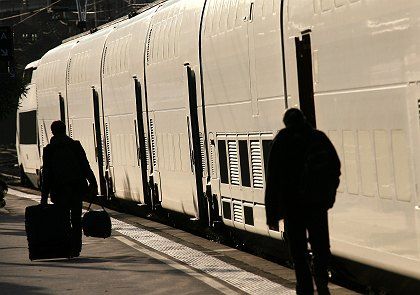 A railway platform on Tuesday. France faces widespread transport and other strikes starting later on Tuesday.

Sarkozy wants to prevent the rise of a protest movement that encompasses all sections of society by promising people more money in parallel with his reforms -- by abolishing taxes for overtime work, for example. The strategy could turn out to be successful: Polls show that the French care considerably more about their personal purchasing power than about anything else.

Still if the mood were to suddenly change, that would not be the first time in the recent history of France. More than three quarters of employees already participated in the first train conductors' strike three weeks ago -- a higher percentage than during the "historic" strike of 1995, when week-long protests forced then Prime Minister Alain Juppé to withdraw his proposed reforms.