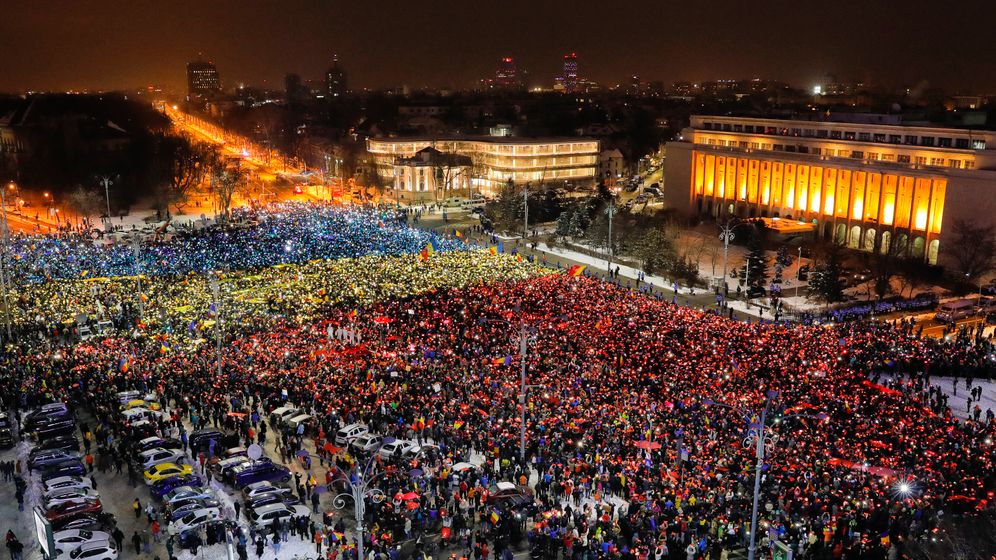 They coordinate over Facebook, Twitter and Firechat. They sing together and freeze together, waving Romanian flags and cheering when words like "resistance" or "resign" are projected onto buildings housing those in power.

They are persevering, emerging evening after evening as soon as the lecture rooms of Bucharest University close and offices shut down for the night. Thousands, tens of thousands or even hundreds of thousands of demonstrators gather on Piata Victoriei in the heart of the Romanian capital, crowd up to the barriers surrounding the seat of government and shout "hotii, hotii, hotii!" meaning "thieves, thieves, thieves!"

The images of this uprising have spread across the world: a sea of people holding up their illuminated smart phones. And they show a peaceful and mostly youthful citizens' movement launched by the country's newly awakened civil society against the country's old elite. The marchers are pro-EU, which is seen positively in Romania for having brought the rule of law and economic growth to the country. And they are persistent, having protested night-after-night for almost two weeks now. First, they managed to turn back a decree that would have eliminated penalties for lower levels of official corruption and abuse of office. Now, they have their sights set on toppling the entire government. They've already bagged two ministers.

In the middle of the tumult on Wednesday evening, slender and inconspicuous, stood Sebastian Burduja, 31, one of the leaders of the protests, which don't officially have a leader. Those inside, he said glancing at the government building, have to be tossed out: "They are corrupt and no longer have our trust." Burduja is head of PACT, a platform founded in 2016 by young activists demanding "competent and clean governance." When asked if he himself has political ambitions, Burduja said: "It's not about me. Prestige doesn't mean much to me. But if I were called upon, I would accept."

Sebastian Burduja is one of the most self-confident heads of the mass protests and Forbes has identified him as being one of the top 30 young leaders in the country. He was born in Bucharest not long before the dictatorship of Nicolae Ceausescu came to an end and later studied political science at Stanford. He also spent three years at Harvard and worked for the World Bank in Washington. Then, in early 2016, Burduja returned home "sick with longing for Romania," as he says.

On that Wednesday evening, the ninth day of the popular uprising, Burduja spent hours standing in the snow and below-zero temperatures. His wife, he noted, is American and grew up being told: "Stand up for your rights." Both of them want their daughter to be able to pursue her dreams in Romania: "maybe as a celebrated chef, maybe as a singer, maybe as something completely different." Every citizen of Romania, Burduja says, must have access to everything -- a hospital bed or a job -- without having to pay a bribe as is normal in Romania.

The protests surrounding Victory Palace, from which Prime Minister Sorin Grindeanu governs the country, are only superficially against the decree that was rushed through. The legislation called for eliminating penalties for abuse of office and corruption as long as the damage didn't exceed the equivalent of 45,000 euros -- which is six-and-a-half times the average gross annual salary in Romania.

In reality, the demonstrators stand for the dreams of millions of their fellow citizens to finally, 27 years after Ceausescu's demise, be freed from exploitation at the hands of the old regime's successors. "Our break with communism was incomplete," says Burduja. "Romania was the only country in Eastern Europe to vote the communist's successor party into power following the fall of the Iron Curtain."

In Romania, that party is the social democratic PSD and it is considered to be the party that is the most contaminated with corruption in in the country. Ion Iliescu, who remains, at 86, the party's honorary president, became head of state immediately following the collapse of the Ceausescu regime. His protégé Adrian Nastase, who was prime minister from 2000 to 2004, has been convicted several times since then for accepting bribes and for blackmail. Nastase's protégé Victor Ponta, who was prime minister from 2012 to 2015, was charged with corruption, breach of trust and money laundering. The current head of the party, Parliament President Liviu Dragnea, has been convicted of voter fraud and also stands accused of abuse of office and falsifying documents. The planned decree would have allowed him, the strong-man of Romanian politics, to avoid a looming prison sentence.

Yet the party was still able to win December parliamentary elections with 45 percent of the vote. How can that be? There is a simple explanation, says Burduja: "The PSD has increased pensions for retirees while doubling student stipends and granting them free train travel. The students, though, are now saying thank you and traveling for free to Bucharest from all across the country to demonstrate against the arrogance of power." Many of the people demonstrating today didn't even bother to vote.

Much Riding on Romania's Reputation

Laura Codruta-Kövesi, chief prosecutor of Romania's National Anticorruption Directorate, is currently investigating 2,151 cases of abuse of office and leads a team of 220 prosecutors. She is celebrated in European Union circles and is cheered by the demonstrators in Bucharest.

In all, the damages from the cases in question amount to over a billion euros, meaning the government's planned legal amendment would also have harmed the country's budget and not just its reputation. But there is much riding on Romania's reputation as well: With growth of almost 5 percent last year and unbroken enthusiasm for the European Union among the populace, the country has recently been in the process of ridding itself of its distinction as one of the EU's most backward member states.

To be sure, at least 3 million Romanians are now living and working abroad, but other statistics are more encouraging: When it comes to per capita gross national product, Bucharest and its surroundings have overtaken Rome. Furthermore, economic output across the country is growing faster than anywhere else on the continent.

Given such developments, the political crisis comes at a bad time. A vote of no confidence in the government failed on Wednesday in parliament and the protests have continued for now. A petition, of which Burduja is also among the signatories, notes not without pathos that: "Romania's history is currently being written anew" and goes on to discuss what is at stake, namely freedom, the rule of law, decency and civil society. The Romanian "Revolution of Light," the petition says, is "an example for all of Europe and for democracy worldwide."

In was in 1989 that such a mass of people last took to the streets of Romania. At the time, millions demonstrated against the communist dictator Nicolae Ceausescu, who was ultimately toppled and, together with his wife Elena, executed.

The man who, on Dec. 22, 1989, uttered the words on television that "the dictator has been toppled" and thus announced an end to despotism in the country is named Mircea Dinescu. Today he is considered to be Romania's greatest living poet and during the dictatorship was widely known as "a professional rebel." He is now 66 years old and runs a culturally and gastronomically ambitious estate on the banks of the Danube in addition to a restaurant in Bucharest called Lacrimi si Sfinti, or "Tears and Saints."

If you ask him whether the events of the last week remind him of 1989, Dinescu merely laughs. He says he sees no connection at all and seeks to distance himself from this "social tsunami," this sudden appearance of "young wolves," as he refers to this aggressive generation of young political activists. "The discotheques are full here and the polling stations are empty. It's paradoxical that a generation of youth, which had shown little interest in politics for years, is suddenly organizing demonstrations over the internet with record participation, isn't it?"

He is full of doubts about the motives of the politicians who are now supporting the protestors and he includes Romanian President Klaus Iohannis among them. Many, he says, were silent for 27 years about the widespread theft of Romanian state assets only to sound the alarm now. "Of course it is better when the youth rises up instead of sitting at home," Dinescu says. But, he adds, it helps nobody when people use Hitler posters to demonstrate against the leftist government. Such "operetta anti-communism" is absurd, he says: "Yelling 'red scum' on the streets when you know that nothing can happen to you might be fun, but it's just a fleeting fad."

For Dinescu, the demonstrations are more like an event, in contrast to 1989. "Back then, there wasn't really a movement in a true sense," he says. "Nowhere in Eastern Europe were there fewer dissidents than in Romania. Nothing would have happened on the streets if Ceausescu hadn't called for mass rallies himself only to realize too late just how wrong he had been about the public mood."

It is an accurate analysis, but it ignores the conditions of the time. In 1989 in Romania, there were only two hours of television per day and few people had telephones, never mind internet and social networks. There was only one valve for the pent-up fury in the populace and it was immediately released in those mass rallies called by Ceausescu: The gathered party loyalists, who were supposed to cheer their leader, booed him instead.

Many of today's demonstrators are too young to remember the events of 1989. But it likely isn't a coincidence that similar protest movements have developed in many other Central and Eastern European countries in recent years, such as Macedonia, Croatia and Poland. The Maidan demonstrators in Ukraine also had similar concerns. Some political scientists have begun speaking of a "second revolution," some 30 years after the first.

Sebastian Burduja says: "I can remember as a four-year-old seeing my father with the revolutionary armband on his winter coat as the conviction and execution of the Ceausescu played on the television."

But resistance in the 21st century, he says, works differently. Mircea Dinescu and other heroes of yesteryear, says Burduja, talk about today's opposition activists almost as though they have forgotten how others talked about them three decades ago: "Who are those guys out on the street?"

Burduja says it doesn't bother him because he has a clear goal in his sights: "I have a dream of changing this country and to serve it." 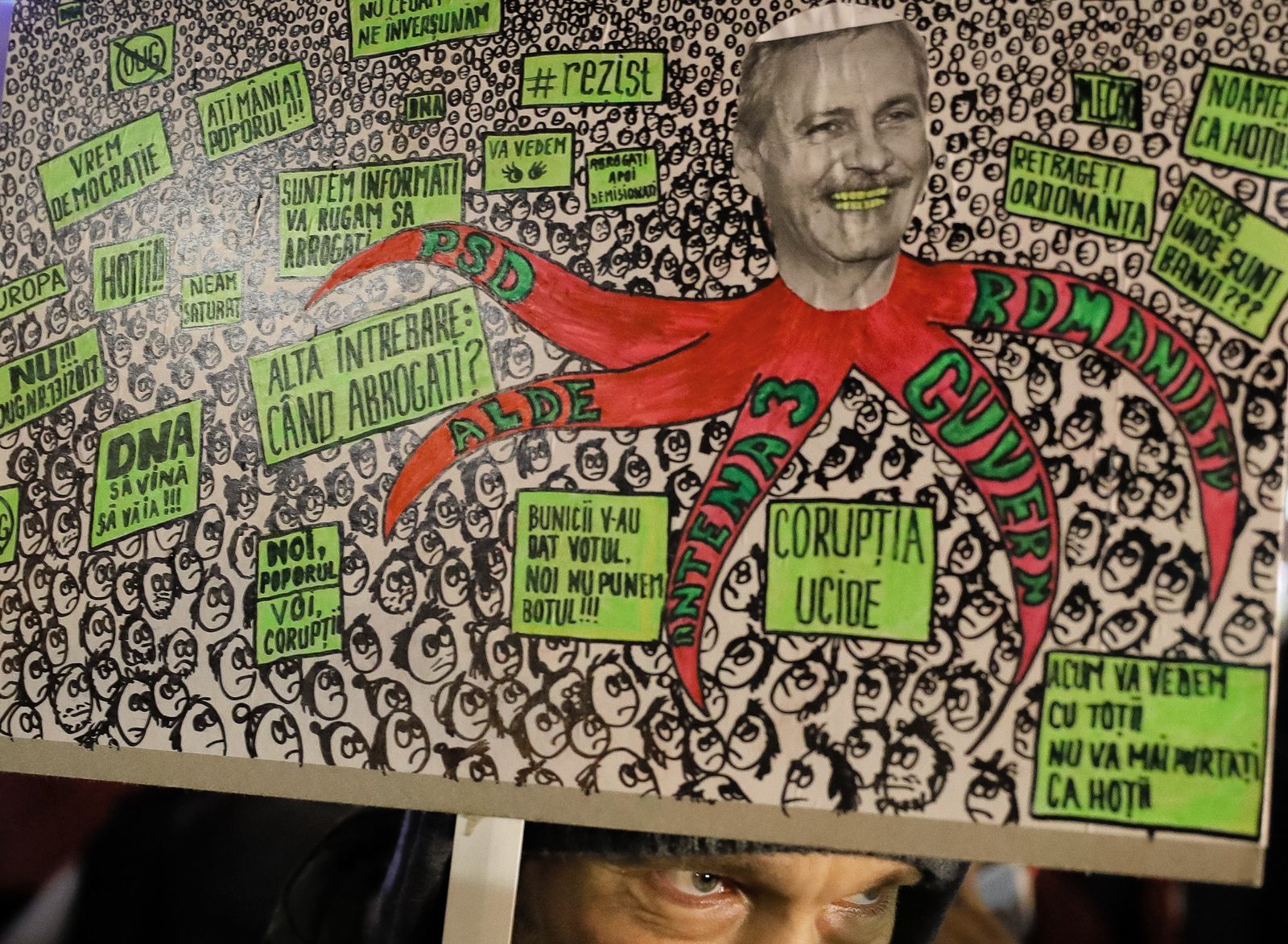 This image depicts PSD leader Dragnea. The party had sought to quickly push through a legal amendment that would have decriminalized corruption offenses worth less than 45,000 euros -- which is six times the average gross annual salary in Romania.