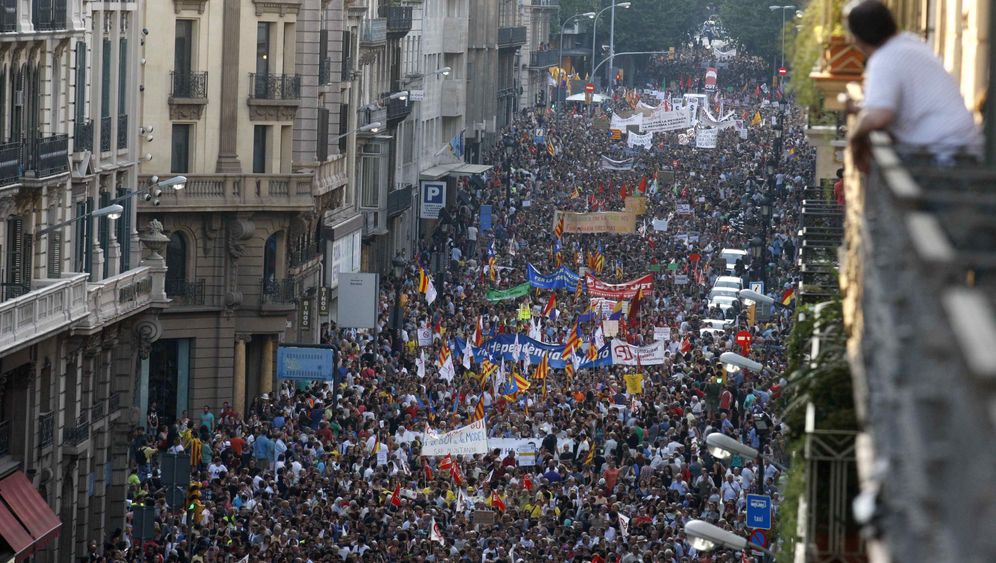 Spain may soon be getting aid for its troubled banking sector, but that appears to be of no comfort to the Spaniards. After Madrid passed another round of tough austerity measures on Thursday, tens of thousands took to the streets in some 80 cities around the country.

The protests, which reportedly saw some 100,000 demonstrators in Madrid alone, were called by the CCOO and UGT trade unions, which reject the government's planned belt-tightening efforts. The two unions have threatened to call a general strike in September. Dozens of injuries and a handful of arrests were reported following scuffles with police.

Prime Minister Mariano Rajoy's conservative People's Party (PP), which has an absolute majority in parliament, pushed the controversial plan to cut spending by some €65 billion ($80 billion) through parliament on Thursday, despite staunch resistance from the opposition.

The austerity measures include a significant boost in the value-added tax, the abolition of Christmas bonuses for state employees and cuts to unemployment payments. The deep reductions in state spending have been met with widespread resistance, with police officers, firefighters, soldiers, judges and public defenders all taking part in Thursday's protests.

The nation remains mired in a crushing recession, with more than 5.6 million unemployed. At a record of around 25 percent, the level is on par with the unemployment rate in the United States during the Great Depression. Meanwhile, it is becoming increasingly difficult for Madrid to access financial markets, as it continues to pay ever-higher interest rates in sovereign bond auctions.

Though Spain has asked for aid to ease its banking crisis, sparked by the collapse of a real estate bubble in 2009, it would prefer not to receive a full-fledged bailout under the euro rescue package. German parliament approved the Spanish bank aid worth up to €100 billion on Thursday, and it is expected to be paid out in several tranches by the temporary euro bailout fund, the European Financial Security Facility (EFSF).

The finance ministers of the 17 euro countries likewise gave the green light to the Spanish banking bailout on Friday. In addition to strict oversight of the banking sector, they will require Madrid to reduce its budget deficit to under 3 percent of gross domestic product by the end of 2014.

On Friday German commentators take stock of Spain's situation and ask whether German parliamentary approval of the Spanish banking bailout will ultimately make a difference. They also question whether yet another bailout is the right path for Germany and the European Union as a whole.

"German Chancellor Angela Merkel has managed once again to get a parliamentary majority. But who cares? No one. Regardless of whether the vote passes with or without the opposition, more questions than answers remain. Since the financial crisis began two years ago, euro-zone leaders have passed one aid package after the next, increasing Germany's liability. Little has come of it. The situation in the debt-ridden countries has not improved."

"It's no wonder that Germans are asking why they should have to bail out banks with their hard-earned money when these institutions have only wasted and squandered everything."

"At this point, it has become routine. With stoic expressions, parliamentarians have listened to the government's reasons why German aid to Europe is unavoidable -- and an exception has been made for Spanish banks after already bailing out Greece, Ireland and Portugal while Cyprus has come knocking."

"No one wants to question the quality of the requirements for Spain, as described by Finance Minister Wolfgang Schäuble -- probably also because the Bundesbank president publicly pledged to 'broadly tackle' Spain's problems, not just focusing on the banks...."

"But this is all just a smokescreen. The reality is that Spain is getting aid with loosened conditions. Soon Italy will ask, too. And the other reality is that, instead of investors, once again (mainly German) taxpayers will have to pay for the faulty speculation of banks."

"There is no reason to over-dramatize the situation in Spain. But the social peace is fragile. The outraged citizens have joined up with the unions. There isn't a single institution of public life that hasn't been hit by a major crisis of confidence. The royal family, the political system, the economic elite, the justice system and the media have all lost standing. Spain is saving and reforming like never before, writing a debt brake into the constitution and restructuring everything. But hope has become a rare commodity."

"The discontent (among politicians over the euro crisis) is more than justified. However, euro-zone leaders ought to take a hard look at themselves. They have only themselves to blame for the fact that -- after Greece, Ireland and Portugal -- now Spain is also on the brink. They recognized far too late that, in addition to a debt crisis, a banking crisis was swelling, too. And the strategy with which they are battling these crises is far too cowardly. Instead of seizing the problem at its roots and restructuring the financial sector (which would also mean bank failures), they are adding to the burdens of the states. This is only exacerbating the vicious circle of debt and banking crises."

"Chancellor Merkel is among the first to blame for this. She forced Spain under the bailout fund and is now trying to sell this as a success. But, in reality, Merkel is driving Europe into the abyss bit by bit."

"The broad majority (on the German vote) contradicts the sentiments of the people, which is certainly a political problem in a democracy. Skeptics and opponents of the euro are hardly present within parliament, which makes saving the euro appear to be an elite project. Still, this broad majority is a strong signal. Unlike some members of the euro zone, Germany is not only economically stable, but also politically robust. … But German stability is no natural law. Merkel's center-right coalition, stable only in its instability, must envy the opposition. … But the end of this alliance is nigh. … The general election campaign is approaching. It will perhaps be the last time that a clear majority of parliamentarians votes in favor of European solidarity."