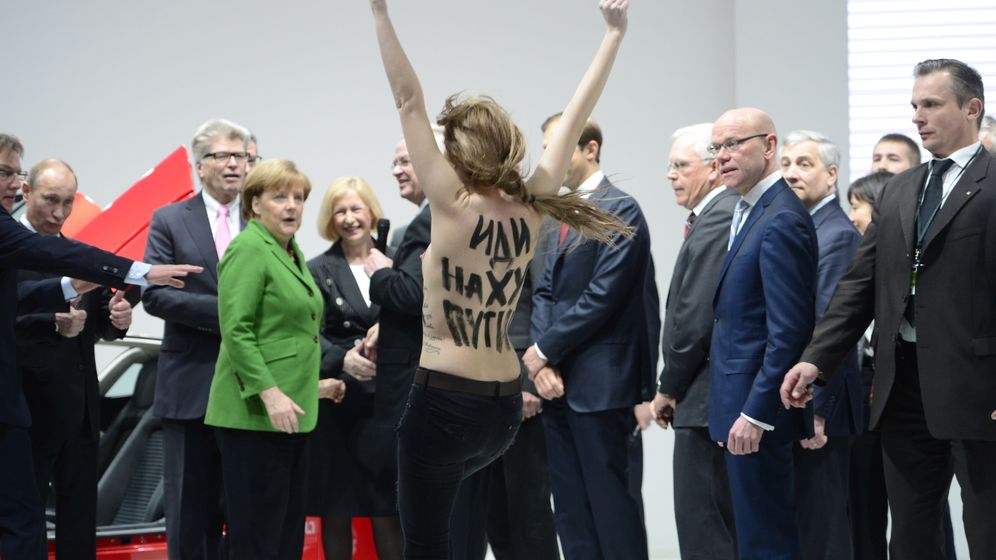 Russian President Vladimir Putin was confronted with naked criticism during a state visit to Germany on Monday morning when a group of young women, likely with the women's rights group Femen, surprised officials with a bare-breasted protest.

As Putin toured a trade fair in Hanover with German Chancellor Angela Merkel, the women ran toward him screaming. Naked from the waist up, the activists had written anti-Putin slogans on their bodies, including "fuck dictator."

Putin, who often poses in rather macho staged PR shots, did not appear perturbed by the protest. In fact, journalists captured him smiling and giving two thumbs up as one protester approached. His German counterpart Merkel reacted with open-mouthed surprise.

The protest did not appear to dampen the mood, and Putin remained philosophical. "I don't see anything terrible about it," he said.

Once bodyguards and security personnel had quickly covered up and carried off the protesters, the trade fair tour continued.

Later, the Kremlin wasn't nearly as relaxed about the matter, however. "This is ordinary hooliganism and unfortunately it happens all over the world, in any city. One needs to punish (them)," spokesman Dmitry Peskov said.

Criticism from Merkel, Too

Putin didn't have to wait long for more criticism, which later came from Merkel, who underlined her opposition to recent raids on non-governmental organizations in Russia. Germany hopes that the work of such foundations will be unhindered in the future, the chancellor said, adding that Germany supports an "active civil society" in the country.

Putin defended Russia's recent large-scale crackdown on NGOs, which have been forced to register as "foreign agents" if they receive money from outside the country, a move that has many critics accusing Putin of taking another step to turn Russia into a dictatorship. The flow of money is "alarming," he said. "Our citizens have the right to know where the money comes from," he said, adding that other countries have similar rules, including the United States.

The two leaders also disagreed over the civil war in Syria, with Putin defending weapons deliveries to Bashar Assad's regime. Because Assad runs a legitimate government, doing so does not violate international law, he said. Merkel's response: "In our view the authority of Mr. Assad no longer exists." Still, Russia said it was prepared to participate in international negotiations, saying that weapons deliveries must stop on all sides.

The two leaders did find somethint they could agree on, though, saying that increasingly militant North Korea should show more restraint. "We were very much in agreement that the international community must calmly but clearly appeal to North Korea to end this provocation," Merkel said.