Teófila Martínez Saiz is to be envied, and not just by other mayors. For the last 19 years, the 66-year-old has governed Cádiz, one of Spain's most beautiful cities. Her office is in a palace with elegant columns, ancient statues, opulent murals and a view of the sea.

What's more, she is popular, not least for her ability to mobilize external money for local projects. Currently, a five-kilometer-long (3.1 mile), €500 million bridge is under construction which will stretch from the island city of Cádiz to the mainland. It is to be the highest such structure in Europe and will also have a middle section that can be opened to allow megaships of the future to sail into the bay.

The bridge isn't the only such publically funded project in Cádiz. The European Union also helped the city -- population 123,000 -- build a new wastewater treatment plant, Martínez notes, as well as providing money for continuing workforce education, reindustrialization projects, the expansion of the harbor and more.

In mid-September, the EU earmarked an additional €135 million for a tram line between nearby Chiclana and Cádiz. Brussels is also paying for a new bicycle path above the beach.

Yet despite the windfall, the economy in the city and the surrounding Andalusia region is in disastrous shape. More than a third of the adult population is unemployed and the youth jobless rate in the Cádiz Province is over 57 percent, the highest in all of Spain. Young people in Andalusia prefer to head overseas for work if possible. Those who cannot, stay at home with mom.

The economic difficulties are a problem for the region, but also for the European Union and the European Investment Bank (EIB), which has proffered €6.7 billion worth of development loans to the region in the last 10 years to little effect. The projects have often been accompanied by waste and a not insignificant amount of corruption. This summer, the situation even resulted in the resignation of IEB Vice President Magdalena Álvarez Arza.

A Time of Crisis

Andalusia receives more EU money than almost any other region in Europe. The EU, together with money made available by Spain, made a total of €14 billion available to the province between 2007 and 2013. Some €2.3 billion, most of it from the European Social Fund, was provided for training programs for unemployed Andalusians. But Spanish anti-corruption officials believe that many of the registered vocational training courses never actually took place.

Currently, millions of euros are being spent in the Cádiz port, with the construction of a new, 500-meter-long wharf underway. A port manager says that the quay will provide more room for container ships from overseas to load and unload their cargos. The terminal's capacity is to more than double, from 160,000 units to 350,000 units per year.

The expansion, though, is coming at a time of crisis for global shipping. Indeed, only cruise ships are doing well, and Cádiz, with its baroque beauty from the 17th and 18th century is already a regular stop on the Mediterranean voyages of many such vessels.

Nevertheless, the EU approved €60 million from its Structural Funds for the expansion of the container terminal on the edge of the historic city center. A further €60 million is to come from the EIB in the form of a development loan. The money earmarked for the project is even more than the €118 million estimate for the total costs.

Even locals are critical of the project. "We are fighting for the industrial port to be moved from the city to the mainland," says Teresa Vassalo Varela, a co-founder of the citizens' initiative El Caso Cádiz. It makes no sense, she says, to expand the port on the island, with its historic old town, when there are more suitable sites on the mainland that would be cheaper to develop.

In 2011, the small initiative filed a formal objection to the EU subsidies. The European Anti-Fraud Office (OLAF) has also stepped in. "Cádiz is one of these places where European structural aid was converted into a business model for the benefit of people who never were, or will be, in need of aid," the initiative wrote to the European Commission in 2013.

Need for a New Bridge?

The activists from El Caso Cádiz see a connection between the giant bridge across the inlet and the container terminal. The six-lane highway only makes sense, they argue, if it is intended to provide trucks from the port access to the mainland. The city itself doesn't really need the bridge; there is already a three-lane span stretching across the narrow end of the inlet which is perfectly adequate. Indeed, the tight city center isn't able to handle any more vehicle traffic than it already has.

Had the expensive new bridge been included in the price tag for modernizing the port, it seems unlikely that the European Commission would have approved the subsidies. The costs would have massively exceeded the expected benefits of increased container traffic. Brussels has consequently continued to insist that the two projects are unrelated. The new bridge, the EU wrote in a letter to the citizens' initiative, is not necessary "for the full operational effectivity of the container terminal." The document notes that the Spanish state is financing the bridge and that it is being built to improve the city's connection to the mainland.

But even EU officials appear to be uncomfortable with that line of argumentation. Funding earmarked for the port expansion has still not been definitively released, pending the outcome of the El Caso Cádiz objection. Nevertheless, the state-owned port authority has moved ahead with construction on the strength of loans and advance payments from the European Commission.

The Port of Cádiz, however, isn't the only terminal in the region currently undergoing expansion. The one in Sevilla is also being improved. As part of the project, the EU and the EIB financed the construction of a new lock, which is Europe's largest. Because the Andalusian capital is located 100 kilometers from the seaside, the Guadalquivir River, which connects Sevilla with the Atlantic, must be dredged to a depth of seven meters (23 feet).

Funding from Brussels is going to pay for the additional dredging of the river, much of which flows lazily through a nature reserve. The 2007 to 2013 EU budget had also included funding for improvements to the Sevilla container port, but environmentalists, including some within the European Commission, have thus far been able to prevent that money from being dispersed.

Meanwhile, there have long been suspicions that there might be more behind the vast quantities of EU funding for Andalusia than meets the eye. Former EIB Vice President Àlvarez Arza, for example, has been accused of being part of an illegal system for the dispersal of aid money. In 2001, Andalusia established a fund to help workers hit by layoffs, but some of the money was allegedly misappropriated. Álvarez Arza has denied all accusations of wrongdoing and posted €30 million in bail to avoid pre-trial detention.

There are images showing Álvarez Arza in 2005, when she was still minister of public works, at the signing of the EIB loan for the gigantic lock in Sevilla. A picture from 2007 shows her looking proudly at a model of the gigantic bridge spanning the Cádiz inlet. "It will be higher, longer and wider," she gushed happily. She was also present at the signing of the EIB loan agreement for the Cádiz container terminal.

Today, the EIB has a problem. When El Caso Cádiz began questioning the role played by Álvarez Arza in 2011, the investment bank brushed aside their concerns. "Following an investigation by the independent complaint department of the EIB, no violations of EIB rules were found," the bank wrote in a statement provided to SPIEGEL. The final decision to provide the loans was not made by the managing board, but by the administrative council, which is made up of representatives from all EU member states, the statement continued. Recent checks of projects Álvarez Arza was involved in likewise found no irregularities.

Inge Grässle, however, has her doubts. She is the chair of the Budgetary Control Committee in the European Parliament. In early September, she submitted a parliamentary question to the Commission reading in part: "What role did Ms Álvarez Arza play in the authorization and negotiation of a financing agreement with the Cádiz Bay Port Authority? What did the agreement say, and what funds have been granted by the EIB and the Commission for the construction of the port terminal, the building of the bridge in Cádiz, and links connecting it with industrial estates in and around Cádiz?"

Cádiz Mayor Martínez is not discouraged. Though work on the bridge has been temporarily halted due to renewed cost overruns, construction on the structure and on the other projects has progressed far enough that, she believes, there is no turning back.

Only the future sometimes fills her with trepidation. "We are going to have world-class highways, train lines and ports," she says. "What will we do if nobody wants to use them in the end?" 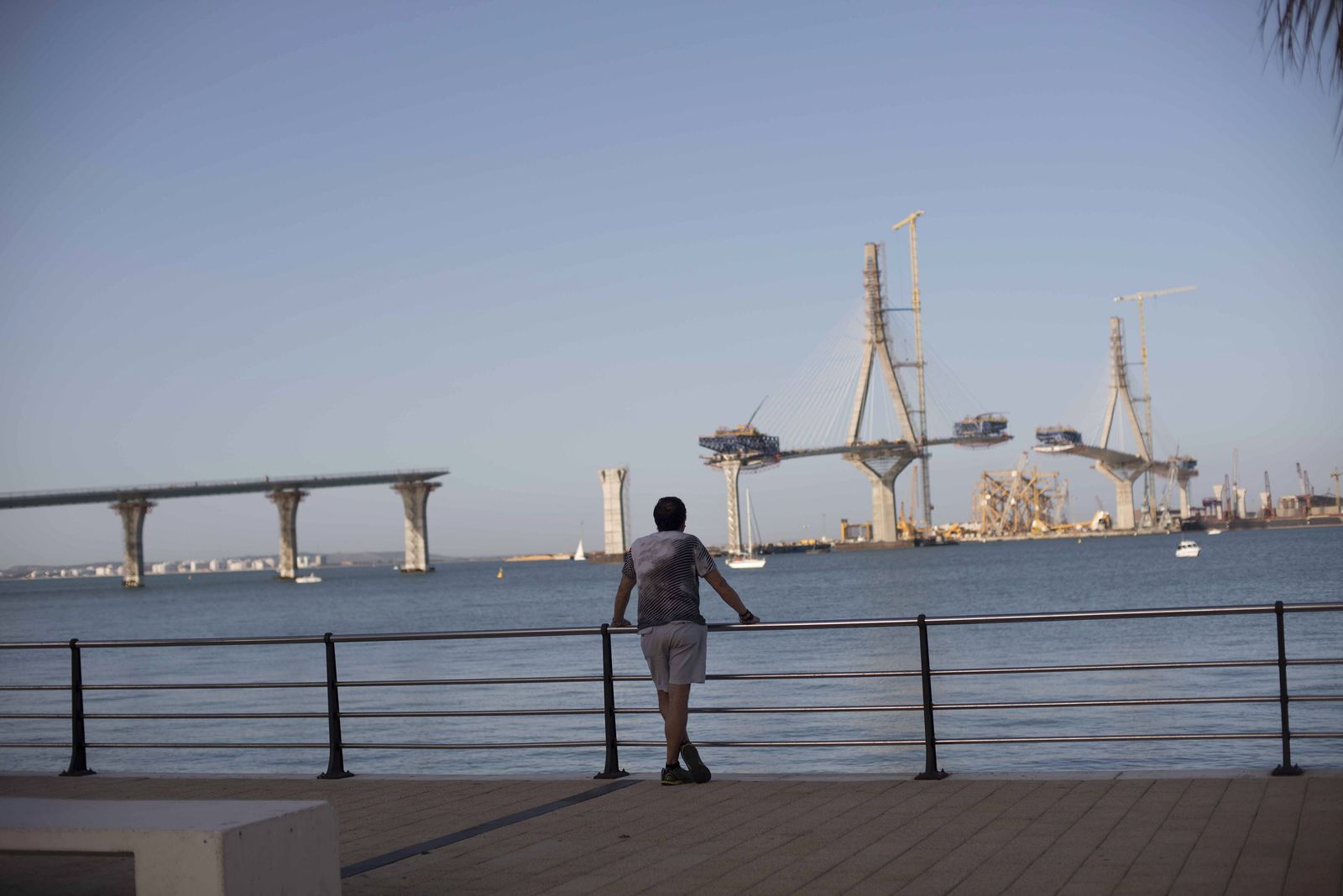 Does Cádiz really need this massive new bridge to the mainland?