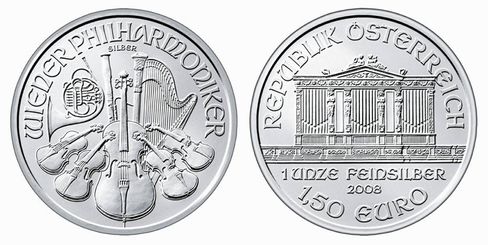 The object of desire is 37 millimetres in diameter and made of .999 fine silver. On one side, the coin shows an organ, its country of origin ("The Republic of Austria") and its face value: €1.50 ($2.12). On the flipside: "Vienna Philharmonic Silver" and a few musical instruments from the world famous orchestra.

The coin, known to numismatics as the "Silver Philharmonic," could well drive Germany's already harassed Finance Minister Peer Steinbrück over the edge. Because the ounce of silver is a hot tip among German investors -- and a means of discretely transferring untaxed funds back home.

Austria issued the new coin in early 2008, wisely anticipating the consequences of the bank collapse, the stock crash and the rising value of precious metals. The coin was explicitly intended for purposes of investment, not collection. Bernhard Urban, marketing spokesman of the Austrian Mint, modestly calls it "unique" in Europe. The story of its success has to do with a funny little contradiction: As a means of payment with a value of €1.50, the coin can be used to buy a beer. But nobody in his right mind will take it to the pub in the first place because the exclusive silver piece is worth -- depending on the price of silver --somewhere between €11 ($16) and €14 ($20), and costs that much at the teller's window.

It's this difference between the face and market values of the coin that makes it so attractive in the context of international money transfers. The coin manages -- astonishingly -- to circumvent currency import regulations. A person travelling from Austria to Germany is allowed to bring €10,000 ($14,000) into the country without having to declare it at customs. So that person can bring more than 6,000 Philharmonic coins over the border and in doing so, bring home, with each trip, more than €110,000 ($156,000) of his hidden Austrian treasure.

It's common knowledge that many Germans make use of the discrete accounts in Austrian banks. But it's equally clear that the days of strict banking confidentiality are numbered. Bavarian customs officers claim not to have noticed anything yet. But in Austria, the Philharmonics are already "an absolute hit," as coin expert Urban proudly proclaims, especially among the Germans.

Like the entrepreneur from Munich who picked up the nifty little tip from his friends at the yacht club. Since then, the coin trick has been doing the rounds among wealthy Bavarians who stash their money next door. Because the coin collectors are exchanging tax evasion tips galore in chatrooms, the Bundesbank (Germany's central bank) is not anxious to draw attention to the matter. But senior bankers are abundantly aware of the problem.

The German Finance Ministry has responded by warning inventive investors not to get too comfortable. Customs officers suspicious about coins can forward these concerns. But they can only confiscate the silver pieces if they exceed the face value of €10,000 ($14,000).

"We want to fill a vacuum"

Meanwhile, the Austrian Mint can hardly keep up. It's a four-week wait for the coin at the Oberbank in Salzburg. There's no question that the Philharmonics are reaching well beyond traditional coin collector circles. In February 2008, the mint was anticipating sales of three or at most, five million coins; by the end of the year, almost eight million were in circulation. And already in 2009, nearly five million pieces have been bought or ordered.

Of course, Urban denies that the Philharmonic is making life easier for tax evaders. That certainly wasn't the coin's purpose, he says. It was obvious that investors would go for precious metals in these uncertain times. "We wanted to fill a vacuum that the banks have left behind." Which means: for the growing number of customers who don't trust the investment advisor at their local bank, the Philharmonic offers a perfect alternative.

It's impossible to know how many Germans are using the coin for investment purposes and how many for cross-border transfers. What's clear is that the Bundesbank is not benefiting from the silver boom. German citizens are holding back on domestic coins at the moment; German coins are good only for collecting, not smuggling. Silver mintages have become shelf warmers. Now it's too late for the Bundesbank. The Austrians were first to grasp that in bad times, it makes more sense to mint investment opportunities rather than collector's items.