Danish politicians are in an uproar over democratic freedoms across the water in Sweden, ever since a Swedish TV station rejected a political ad on Friday because of alleged hate speech.

The ad by the anti-immigrant Sweden Democrats (SD) party shows a retiree hobbling forward while Muslim women in burqas charge past to win money from the national budget. "On Sept. 19," their ad declares, referring to the date of upcoming national elections, "you can choose to cut money from immigration budgets, or from pensions."

The Swedish commercial television network TV4 decided not to air the spot because of concerns it would break the country's hate-speech laws. A private radio station banned an audio version of the same ad on Monday.

Now leading politicians in Denmark -- where immigration controversies over the last 10 years have sharpened the tone of political debate -- are crying censorship. Some prominent Danes even want the Council of Europe to send election observers to Sweden.

"It would be appropriate to send observers to the Swedish elections," said Michael Aastrup Jensen, foreign affairs spokesman for the center-right Liberal Party, according to the Jyllands-Posten newspaper. The Liberal Party rules in a coalition government with the Conservatives in Copenhagen.

The far-right Danish People's Party, which formally supports the coalition but doesn't belong to the government, was happy to raise the temperature. "What is happening in Sweden is more grotesque than in Eastern Europe," party leader Pia Kjaersgaard told a Danish TV program. "You would think it's a banana republic."

Kjaersgaard has made political waves before by complaining about Sweden's relative tolerance of Muslim immigration. "If they want to turn Stockholm, Gothenburg or Malmö into a Scandinavian Beirut, with clan wars, honor killings and gang rapes, let them do it," she said in 2005, according to the BBC. "We can always put a barrier on the Oresund Bridge," she said, referring to the bridge which connects Denmark with Sweden.

'Free but Not Fair'

Jensen told SPIEGEL ONLINE that he stands behind his call for election observers in Sweden. "Of course I do," he said. The issue is not just an apparent attempt to keep a new party from entering parliament, he said, but also a tendency at Swedish polling stations to hand out ballots according to party, so a voter can't help declaring party allegiance in public.

He said these habits would raise an alarm with international observers. But he stopped short of condemning the Swedish system as unfree. "The Swedish election is perhaps free, in our opinion, but it's not fair," said Jensen.

This position puts Jensen at odds with his own prime minister, Lars Loekke Rasmussen, also from the Liberal Party. Rasmussen told journalists this week that it was not Denmark's role to interfere in Swedish elections. "An OSCE (Organization for Security and Co-operation in Europe) mission has visited Sweden and expressed its total confidence in the electoral system, and I share that confidence," he said, according to the news agency AFP.

Incitement to Hatred or Free Speech?

As for the Swedes, a fear of losing democratic freedoms has not become a major domestic issue, and Mona Sahlin, who leads the opposition Social Democrats, said the Danish proposal was "not serious," according to AFP.

Meanwhile, the Danish newspaper Politiken reports that Swedish production companies declined to produce the ad for the Sweden Democrats, forcing the party to look for help in Denmark. Even there, one of the companies that worked on the film reportedly regretted its role. "It is not our job to take a political standpoint, but if I had known from the beginning what it was about, we would have declined the job," said Mads Munk, director of the Danish production company Duckling. 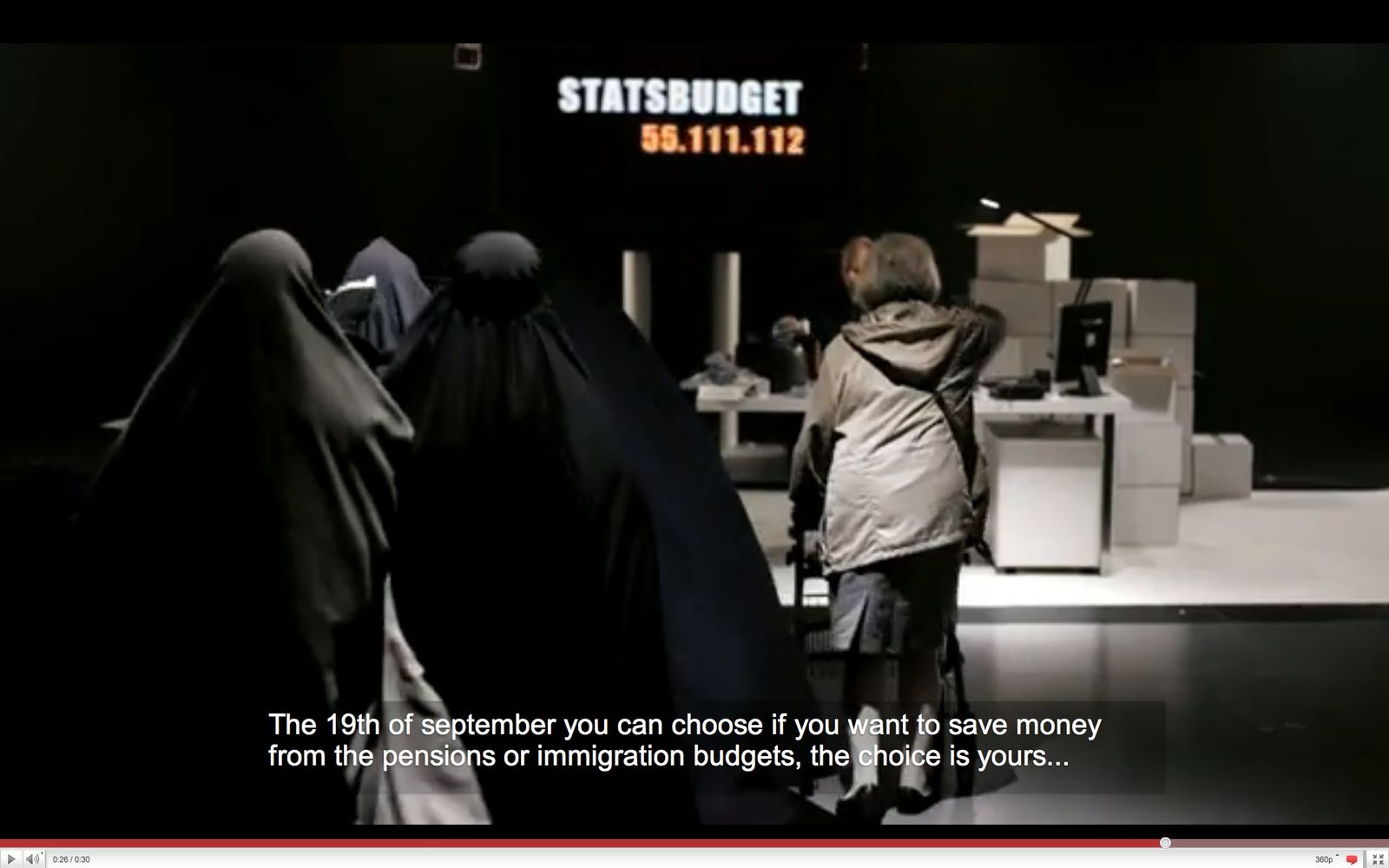 The Sweden Democrats' ad shows a retiree hobbling forward while Muslim women in burqas charge past to win money from the national budget.