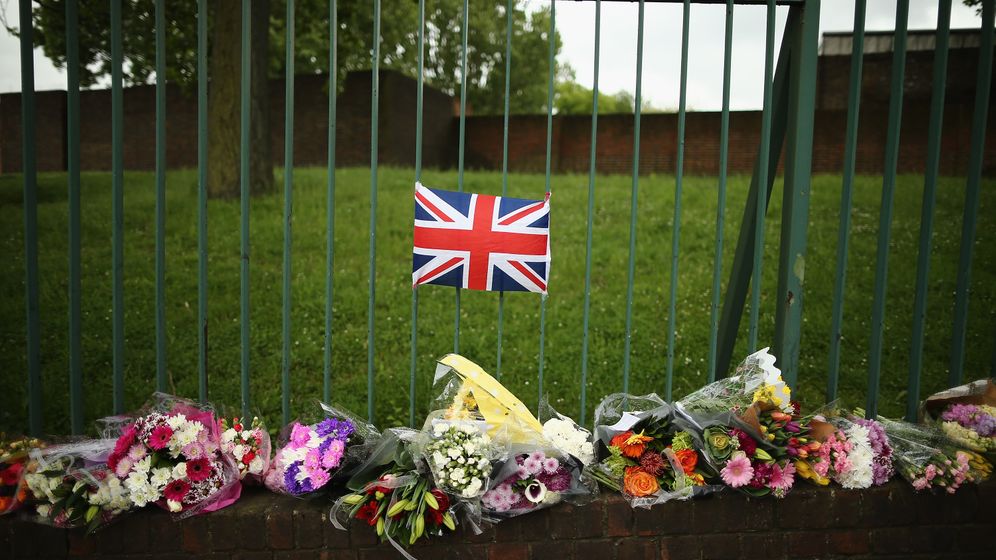 Photo Gallery: The Shock of Woolwich

Anjem Choudary grabs a can of Red Bull before he talks about the man with the blood-soaked hands and a meat cleaver -- a man who is an acquaintance of his. Choudary doesn't call what happened in London last week murder, but rather "the operation on Wednesday."

Wearing a dark robe and sporting a beard that grows down to his chest, Choudary sits down at a table in a café in the northeastern part of the city. The press generally portrays him as a hate monger. In the mid-1990s, he founded the now-banned Islamist organization al-Muhajiroun, in which Michael Adebolajo later participated on a regular basis -- the same man with the meat cleaver who hacked a British soldier to death so savagely, and so publicly, that an entire country seemed briefly in shock.

Choudary and Adebolajo know each other well. Between 2005 and 2011, Adebolajo often attended demonstrations organized by Choudary. Usually they protested the wars in Afghanistan and Iraq, the "crusade of the infidels" against the Muslims, as they called it. In video footage shot by the BBC in 2007, Choudary and Adebolajo can be seen together at a protest in front of a London police station. Choudary is barking into a megaphone. Adebolajo is clad in a white robe and has a serious expression on his face.

Over a period of five years, the two men regularly met, and Adebolajo occasionally listened to Choudary's sermons. He was "a pleasant, quiet guy" when he first met him, says Choudary, who adds that he was surprised to see him again on TV last Wednesday.

On the televised images, the erstwhile pleasant and quiet Michael Adebolajo, 28 -- together with his friend Michael Adebowale, 22 -- is standing on a street in the South East London neighborhood of Woolwich on a dreary Wednesday afternoon and wielding a meat cleaver and a kitchen knife. His hands are covered in blood. Passersby are standing nearby and filming him with their mobile phones. On the street behind him lies the lifeless body of soldier Lee Rigby, 25, an infantryman and drummer who performed ceremonial guard duties at Buckingham Palace. "The only reason we have done this is because Muslims are dying every day," Adebolajo shouts into the camera, adding: "The British soldier is an eye for an eye, a tooth for a tooth."

A few minutes later, when the first police car arrived at the scene of the murder, the two attackers rushed toward the vehicle. Police fired eight shots. Adebolajo and Adebowale are being treated for gunshot wounds at separate hospitals. Their condition is reportedly stable.

British intelligence agencies and police have launched an intensive investigation of the attack. They are determined to find out whether it was a professionally planned or spontaneous act; whether the two men are members of a terrorist network or whether they acted on their own; how they became radicalized, and by whom. The brutal murder raises the very same questions that were asked of the two bombers who attacked the Boston Marathon on April 15: How can it be that two young men who grew up in the UK could come to feel such hate?

Adebolajo's life doesn't look as if it would lead to this murder. His family comes from Nigeria. Adebolajo's father works as a mental health nurse; his mother is a housewife. Both parents are devout Christians. The son has a British passport, and most of his Facebook contacts have typical British names. He studied at Greenwich University, where he met Adebowale, whose family also comes from Nigeria and who also has a British passport. Both men converted to Islam.

British intelligence agencies are searching homes across the country, securing evidence and questioning friends and relatives of both killers. At the same time, though, a number of errors and shortcomings have come to light. Britain's domestic intelligence service, MI5, has apparently known for years that Adebolajo and his presumed accomplice are radical Islamists. In 2010, one of the two men even wanted to travel to Somalia, probably to join the Islamist al-Shabaab militias, and was even arrested by Kenyan authorities. The British authorities were apparently aware of the incident, but evidently did not consider the two men to be a serious threat.

A man with a meat cleaver: It's an image that the British are not likely to forget anytime soon. The attack quickly and shockingly brought into focus the threat that violent Islamists still pose to the country. Ever since the bomb attacks on London's public transportation system in the summer of 2005, police have regularly arrested terror suspects. But the Woolwich murder reveals that all surveillance efforts are futile when two young men decide on a brutal plan.

When one speaks with people who knew Adebolajo, it becomes clear how surprisingly open he was about his radical views. Al-Muhajiroun founder Choudary says that he last saw Adebolajo roughly two years ago. At the time, Adebolajo was already calling himself a mujahedeen, or warrior, and wearing long, light-colored robes. He started to learn the Koran by heart. Choudary says that he had "a big influence" on his life -- and seems to be proud of that fact.

Around 2003, shortly after he converted from Christianity to Islam, Adebolajo joined the al-Muhajiroun group. The group's leader was a Syrian immigrant named Omar Bakri Mohammed, a radical Islamist cleric who urges his followers to fight the jihad and is currently banned from returning to the UK. In 2006, from his exile in Beirut, he allegedly called for violent resistance against "the enemy," which, in his view, is primarily the British and Americans. "When you meet them, slice their own necks," he reportedly said, concluding with: "Use the sword and remove the enemy's head." It sounds like instructions for the Woolwich murder.

No wonder Bakri called Adebolajo a "courageous" man shortly after the attack last week and insisted that his actions could be reconciled with the Islamic faith because he "had not attacked civilians, but rather a soldier." Adebolajo asked him religious questions in London, Bakri says, adding that "he was curious." But he admits that he doesn't know if he influenced the young man.

Choudary says that he was Bakri's right hand. Working together, he says, they aimed to rally Muslim youth throughout the country against the policies of the British government and usher them onto the streets.

When he is asked how he wants to change the UK, Choudary smiles gently. He has often publicly expressed his views, even on television. He insists that he wants to introduce Sharia law throughout the country as well as ban alcohol and gambling. And, of course, abolish the monarchy. He wants to transform Buckingham Palace into a mosque. Choudary sees jihad as a means of defending Islam. He has praised the 9/11 terrorists -- and he refuses to condemn the London bombers from 2005.

'There Will Be War'

After Osama bin Laden was killed, Choudary held a funeral prayer in front of the US embassy in London. Today, he organizes rallies and protest marches in support of the resistance in Syria and against Guantanamo. Before the attack in Woolwich, he wrote on Twitter that the recent tornadoes in the US were God's response to the oppression of the Muslims.

A friend of Choudary's steps up to the table. He calls himself Mohammed and also wears a black robe. He is in an excellent mood. "The entire country's afraid now," he says with glee. Mohammed says that he happened to run into Adebolajo a few weeks ago, "but didn't notice anything special about him."

Whether the entire country is indeed afraid is debatable. Emotions, however, have certainly been stirred. Last Wednesday evening, at least 60 masked right-wing extremists from the English Defense League (EDL) gathered in front of a pub in Woolwich. This aggressive and extremely violent group, founded in 2009, regularly holds protest marches against the presumed Islamization of the UK -- and Islamists have begun to defend themselves. The murder has increased the risk of an escalation.

It was only in late April that six men from Birmingham confessed to planning an attack on the English Defense League. Last summer, the men packed two sawed-off shotguns, knives and a homemade explosive device into a vehicle and drove to a demonstration by the right-wing radicals. They took along a letter claiming responsibility that was addressed to the queen and the prime minister. It said: "Today is a day of revenge." It was only by chance that the police took notice of the men and were able to stop them in time.

Choudary has now left the café, but Mohammed continues to talk. He has been observing the English Defense League for some time, he says. If, in the wake of the murder, the right-wing extremists now try to launch an attack against the Muslims, he insists his people will have an appropriate response: "Then there will be war in this country."