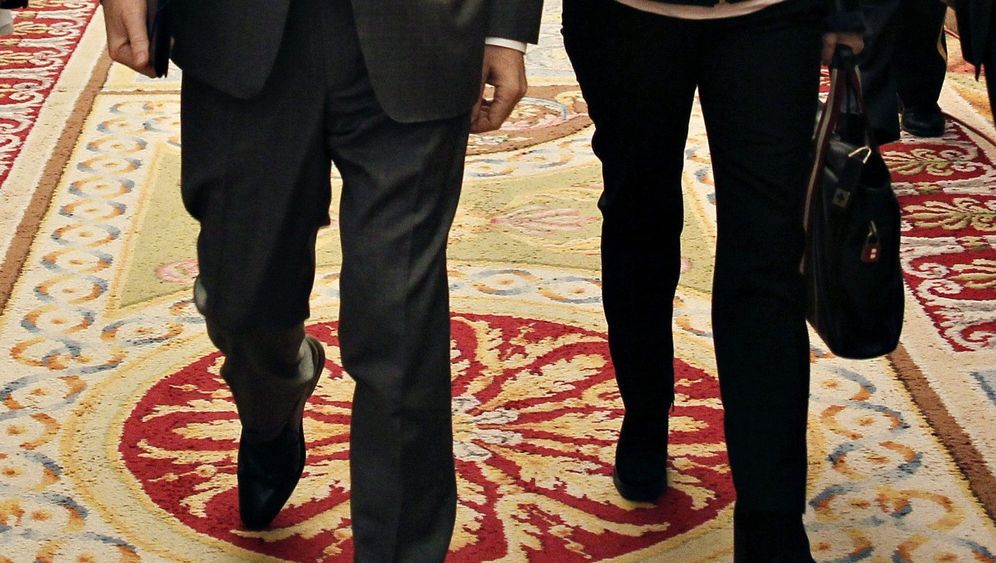 "Bring your own chorizos," read the invitation. Thousands showed up, assembling outside the headquarters of Spain's ruling People's Party in downtown Madrid for a symbolic barbecue. Similar gatherings took place in front of the party's offices in 30 other Spanish towns. Chorizo is both the name of the thick, spicy sausage popular in Spain, and a word used to describe corrupt politicians.

The protests came in response to double accounting conducted by the party's former treasurer, Luis Bárcenas. His incriminating ledgers, uncovered by Spanish newspapers, also implicate Prime Minister Mariano Rajoy, as well as the party's secretary-general, other former ministers in the People's Party and further prominent conservative politicians. The only one who doesn't make an appearance in Bárcenas' accounts is Spain's most powerful female politician, Soraya Sáenz de Santamaría, the 42-year-old deputy and closest confidante of the prime minister.

As Rajoy becomes increasingly mired in the massive scandal over illegal party donations, corruption and financial contributions, Sáenz de Santamaría, a former state lawyer who represented the country's highest court, is one of the few in the party to remain untouched by the allegations. And that alone may be enough to qualify her for the government's top job.

The prime minister, meanwhile, is having to answer some uncomfortable questions: Why, for example, he continued to pay his party's former treasurer a monthly salary of €21,300 ($28,100), even though Bárcenas was forced to resign from his position three years ago after first being accused of corruption. Or why Rajoy continued to send Bárcenas friendly text messages even long after it emerged that Bárcenas had illegally moved many millions of euros into bank accounts abroad.

The opposition in Spain is demanding Rajoy's resignation. On Monday he agreed to appear before parliament to discuss the allegations after the opposition threatened to call a symbolic vote of no-confidence. The date for the appearance is set for August 1, before the prime minister leaves for holiday in his native Galicia.

Even within the usually closed ranks of the conservative People's Party, the calls to replace Rajoy are growing louder. Political commentators in Madrid believe Sáenz de Santamaría, Rajoy's right-hand woman, could well become his replacement. The diminutive lawyer, often seen in high heels, is already Spain's most influential female politician. Since taking office in December 2011, she has coordinated joint work between the cabinet and her party's parliamentary group, and now between the different departments that handle economic matters as well. She also oversees the country's intelligence service.

Austerity with a Smile

Spain's general population knows Sáenz de Santamaría's face, with her large brown eyes and conservative makeup, mainly from television. After each Friday's cabinet session, it is Sáenz de Santamaría who goes on air to announce the ministers' decisions, which often concern new and painful austerity programs. Despite this, she remains the most popular woman in Rajoy's government, which polls show has otherwise taken a brutal nosedive in public opinion.

Late this June, Sáenz de Santamaría announced a tax hike on tobacco and alcohol. She delivered this news as a non-stop cascade of facts, in a firm voice and at breathtaking speed. After 15 minutes of this outpouring, Sáenz de Santamaría cast a quick glance at her purple plastic watch, then took just a few questions from journalists. Asked about the donations scandal surrounding her party, she muttered, "We respect the justice system's verdicts," then swept from the room.

While growing up in Spain's Castile region, Sáenz de Santamaría was an unusual child, who studied every day even during vacations, according to one school friend. She completed law school at the top of her class, then passed the difficult exam to become a lawyer in Spain's civil service. Former professors and fellow students praise her feats of memory, her tenacity and her hardworking attitude.

Cleaning Up the Mess

Sáenz de Santamaría first became involved in politics in the summer of 1999, when she introduced herself to Rajoy, then deputy prime minister and looking for a legal advisor. "Does it bother you to constantly have to clean up the mess?" is the decisive interview question Rajoy asked the lawyer, then 29. "Not in the least," she answered.

One reason Rajoy is pleased to be able to rely on his deputy prime minister is that he can always count on her to have his back at the expense of developing a political profile of her own. But is that qualification enough for Sáenz de Santamaría to take charge of the government?

When fellow People's Party members talk about the "Soraya factor" in the current government, they mean the politician's capacity for mediating between various parties and her willingness to work to the point of exhaustion, something she demands of her staff. Several times, Rajoy has sent Sáenz de Santamaría to talk to Angela Merkel, since he himself has little idea what to say to the German chancellor. Sáenz de Santamaría proudly displays a photograph of herself and Merkel on a bookshelf in her office.

The "Vice," as colleagues call her -- short for the Spanish vicepresidenta -- keeps her private life strictly private. She reacted in anger to television journalists who broadcast footage of a demonstration held in front of her home in the wealthy residential area Fuente del Berro, and only rarely lets herself be seen in a nearby park pushing her son Iván around in a stroller.

Sáenz de Santamaría's husband has been the primary caregiver for their son, taking professional leave to do so. But if the politician soon finds herself and her family moving into Moncloa Palace, the official residence of Spain's prime minister, it could have an added advantage. Without a long commute in an official government car, it could also give her more time with her family.