It's a reliable rule of thumb with European Union summits that the bigger the problem, the longer the meeting. In this case, the discussion lasted seven hours. It was not until early Monday morning that the finance ministers of the euro-zone countries emerged one by one from the conference center in Luxembourg City's deadly quiet Kirchberg plateau, home to various EU institutions.

The euro group -- as the euro-zone finance ministers are collectively known -- had been discussing how to deal with Greece's debt crisis. But the result they announced came as a surprise: The decision about whether to grant Greece new loans has been postponed.

Observers had been expecting that the ministers would at least approve the next tranche of aid, worth €12 billion ($17 billion), from the current €110 billion package that was agreed on by the EU and International Monetary Fund in May 2010. Greece needs the money by mid-July at the latest to avoid a national default.

But the euro-zone partners want to wait until the last minute before giving the green light. In a statement, the euro group said that the Greek parliament would first have to approve the latest round of austerity measures and a €50 billion privatization program before the next tranche was disbursed.

The motive behind the finance ministers' tactic is obvious: They want to keep up the pressure on the Greek government -- not to mention the recalcitrant opposition. On Tuesday, Prime Minister George Papandreou will face a confidence vote in parliament, which will also vote on the austerity package next week. The euro-zone ministers explicitly appealed to all political parties in Athens to support the austerity measures. "Given the length, magnitude and nature of required reforms in Greece, national unity is a prerequisite for success," the statement read.

The euro group's decision to postpone a decision might be clever from a tactical point of view. But whether it will impress the financial markets is another matter. Investors, who value transparency and predictability, are unlikely to be reassured by the euro-zone governments' desire to put off dealing with the problem.

The original plan was that Greece would be able to return to the capital markets to refinance its debt in 2012. But that will no longer be possible -- private investors simply lack the necessary confidence in the country. Hence a second aid package is required, which is expected to have a similar magnitude to the first €110 billion package.

It's unclear who will pay for this. The ministers only managed to agree on principle that this time, in addition to European taxpayers, private creditors will have to be involved on an "informal and voluntary" basis. Chancellor Angela Merkel and French President Nicolas Sarkozy had already agreed on that position during their summit in Berlin on Friday, with the German government abandoning its demand that private creditors be forced to make a "substantial contribution."

Before the start of the Luxembourg summit on Sunday evening, German Finance Minister Wolfgang Schäuble stated the German position once again. It had to be made clear "that the risk will not be borne solely by taxpayers," he said.

The euro-zone finance ministers were able to quickly agree to that demand in principle. But they were divided over how it would work in practice. In their closing statement, the ministers said that the "parameters" of the new financing strategy should be clarified by early July -- effectively passing the buck to the 27 EU heads of state and government who will meet at the EU summit in Brussels on Thursday and Friday.

When it comes to deciding whether to involve private creditors, two diverging aims must be taken into account. On the one hand, European taxpayers have a legitimate interest in getting private investors, particularly German and French banks, to share in losses resulting from Greek debt. On the other hand, there is the concern that forcing private investors to get involved could cause the rating agencies to declare the country bankrupt. Euro-zone governments unanimously agree that a Greek default would have unpredictable and far-reaching consequences for the currency union.

Thus, it seems unlikely that the banks' share will be particularly large -- even if Merkel and Schäuble continue to talk about encouraging the CEOs of banks to make a "substantial" contribution. Experts expect that the private financial institutions will only pony up a sum in the single-digit billions -- a somewhat paltry amount, given that the expected aid package could comprise up to €120 billion.

In this event, Merkel would find herself facing a huge problem. Voices in her coalition government of the conservatives and the business-friendly Free Democratic Party say that the private sector will have to be involved if the German parliament, the Bundestag, is to approve a second rescue package for Greece. Some members of the opposition center-left Social Democrats are already speculating that the issue could lead to the downfall of Merkel's government and early elections, should the chancellor fail to get a majority in parliament to back her plans.

In the meantime, the debate over how best to involve private creditors will continue -- as will the discussion over why European politicians have been so slow in taking action. It already became clear in April that Greece would need a second rescue package. Now it is mid-June, and still there is no plan.

Dennis Snower, the president of the respected Kiel Institute for the World Economy, slammed the EU's indecisiveness in comments to the newspaper Welt am Sonntag on Sunday, saying it was a "completely unnecessary failure of politics." With their agreement to postpone a decision, the euro-zone finance ministers have confirmed that impression yet again. 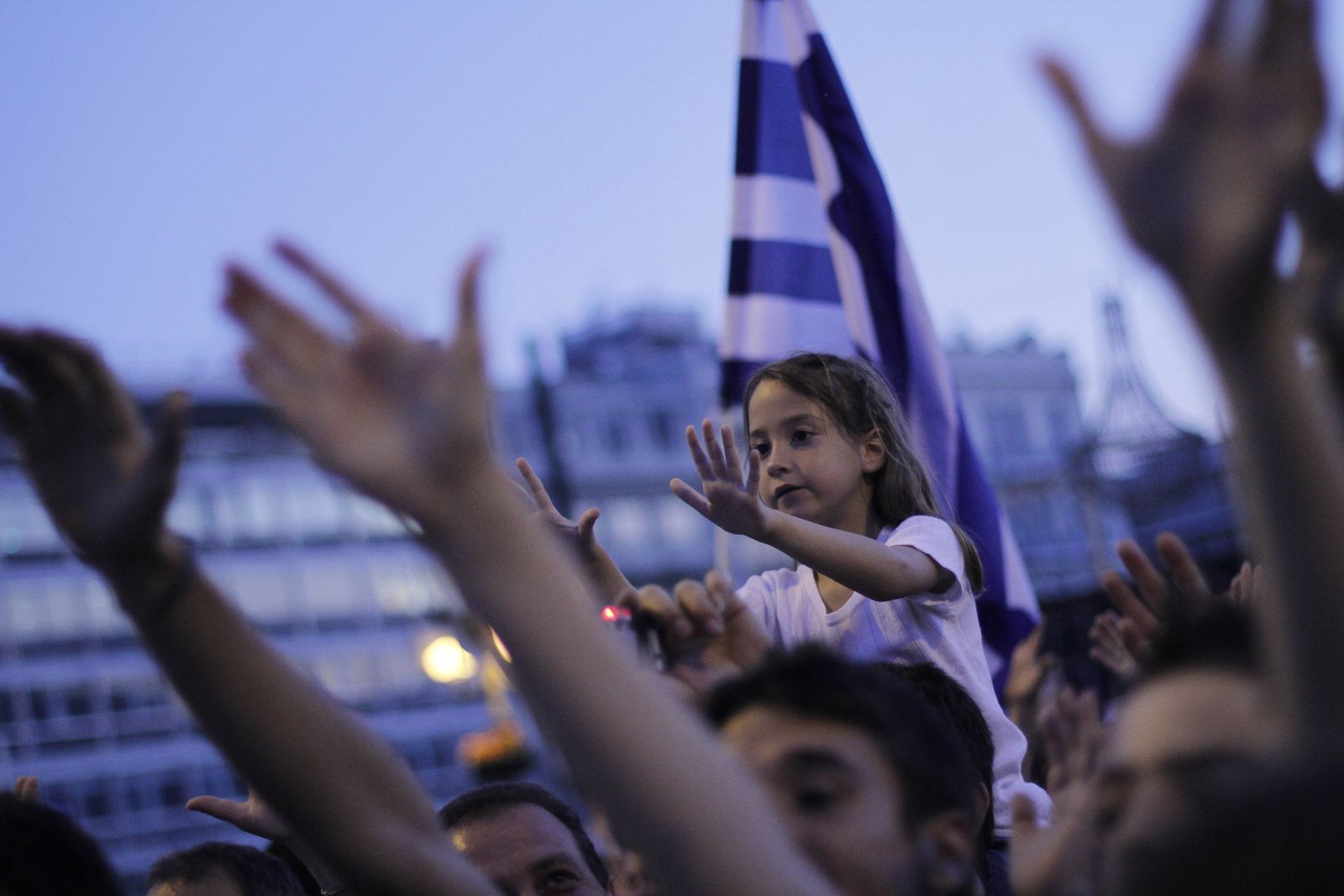 Demonstrators in Athens on Sunday: Will the EU leaves the Greeks empty-handed?