When such political adversaries as European parliamentarian Elmar Brok, a member of Chancellor Angela Merkel's conservative Christian Democrats, and German Left Party bigwig Gregor Gysi agree on something, skepticism is warranted. Particularly if the two use almost exactly the same words.

We find ourselves, said Brok, after rating agency Standard & Poor's recently downgraded the credit rating of nine euro-zone countries late last week, in a conflict akin to a "currency war." The agencies, he went on, are pursuing "Anglo-American political interests."

Gysi took things a tiny step further. For him, the "war" against the "European people" has already begun.

But before we all grab for our rifles and helmets to beat down the evil Americans, it makes sense to take a quick look at reality. What actually happened? S&P changed its opinion on the creditworthiness of some euro-zone states and also on the temporary euro bailout fund, the European Financial Stability Facility or EFSF. That France will repay its debt is, according to these analysts, no longer an extremely safe bet. It is merely a pretty safe bet. When it comes to Italy, their doubts are slightly greater and S&P sees Portuguese sovereign bonds as a speculative investment.

In individual cases, one could certainly argue about whether S&P might rate certain countries slightly better or worse than it should. In particular, though, one should ask why half of Europe erupts in indignation when a few analysts write down concerns that everyone already shares. S&P's assessment of the creditworthiness of euro-zone member states are not nearly as "grotesque" as Herr Gysi has portrayed them to be. Or would he unhesitatingly plunge his wealth into Portuguese government bonds? Thought not.

Even the criticism over the timing of the downgrades is nonsensical. "Now, of all times!" grumble critics of the ratings agencies, just at a moment when the euro crisis seemed to be slackening. When else, though, should S&P have published its findings? At a point when the financial markets were once again in panic? Had that happened, rating agencies would have been blasted for aggravating an already difficult situation.

There is no good time for bad news. It is always unwelcome. And it's also human nature not to want to hear it.

But why are so many people cloaking their fear of bad news in such absurd talk of an Anglo-American conspiracy? It is so simple to lay the blame for Europe's plight on the other side of the Atlantic. The anti-American reflex is still largely intact in large parts of the German population -- and can even be used to attract votes.

Or sell books. It is not just politicians who are jumping on the evil US rating agencies bandwagon across the country; authors like former stock market trader Dirk Müller are likewise trying to attract attention to themselves. "I am certain that the American rating agencies are in close coordination with the American government, which in turn has been dominated for many years by Wall Street," Müller proclaimed in an Internet chat hosted by German public television station ZDF. Proof? Nowhere to be found. But because he has such wonderfully simple explanations for the world, Müller has recently been invited to German parliament Finance Committee hearings as an "expert."

Even if one ignores the lack of evidence, the arguments put forward by the conspiracy theorists are extremely thin. What interest would the US or the American economy have in the euro plunging in value? How would a collapse of the monetary union help? On the contrary: Washington needs the euro. A strong European currency makes American exports cheaper in the euro zone, helping the US to reduce its enormous trade imbalance. In addition, the US could hardly remain unaffected by a deep recession in Europe and the break-up of the currency union which could result. That is why US President Barack Obama has repeatedly urged European leaders to act decisively.

US banks would also suffer greatly were the euro zone to collapse. Some of them are deeply exposed to the euro. Their balance sheets either contain government bonds issued by ailing euro-zone states or they have issued credit-default swaps, which must be paid out should a euro-zone member state go bankrupt. According to the Bank for International Settlements, the bulk of such securities have been issued by US institutions.

Which leaves the US hedge funds, which have supposedly been betting against the euro and want to earn big bucks by doing so. That may be so. But are a few hedge funds enough to organize a great American conspiracy?

An alternative interpretation is much more likely. Politicians, authors and bank analysts like to present rating agencies as bigger and more powerful than they really are. The beautiful conspiracy theories which result are useful in distracting attention from one's own mistakes. 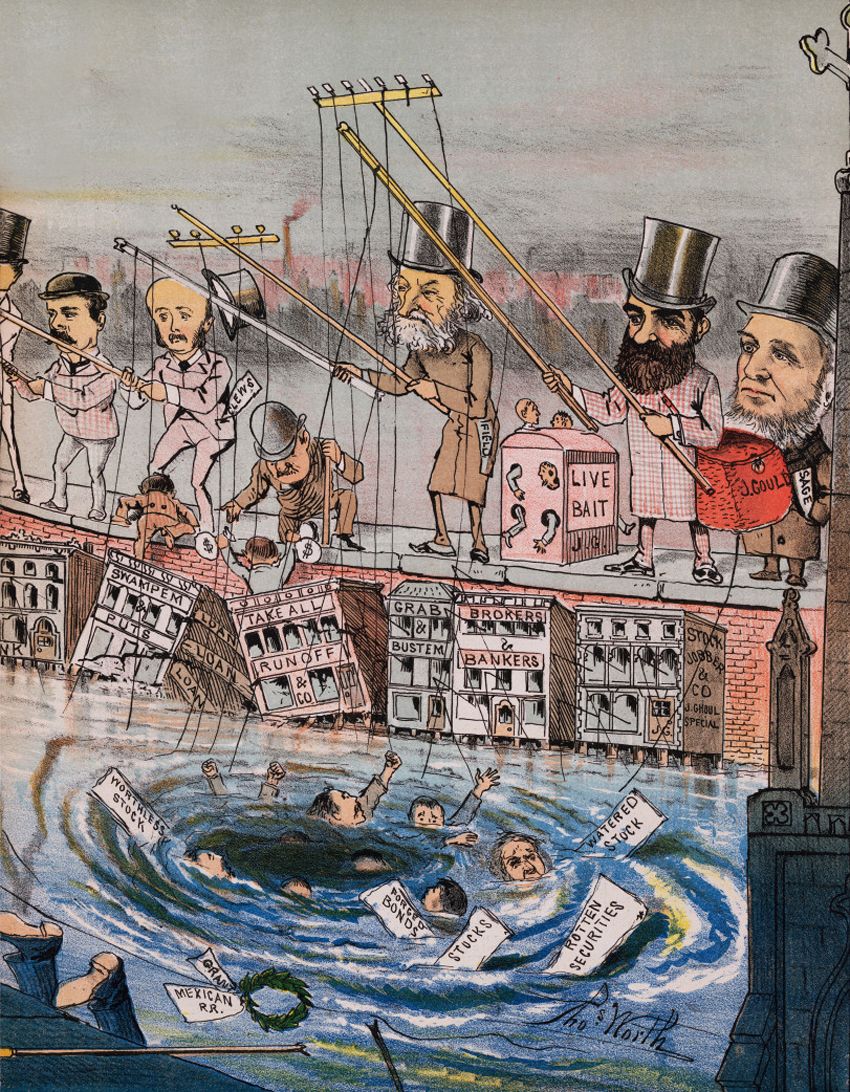 A caricature from 1882 painting the evil Wall Street plutocrats as scapegoats.