Fíve European Union member states have already sought bailout aid from the euro rescue fund. Is Slovenia about to become the sixth? Late Thursday evening, the US ratings agency Moody's downgraded the country's government bonds by three levels, shifting its previous A2 down to a Baa2, and threatened a further reduction in the future. The agency also changed Slovenia's economic outlook to "negative."

The small eastern European country's sovereign bonds now stand just two notches above "junk" status, the level at which bonds go from being a solid investment to a purely speculative one.

Moody's said it slashed the rating because of bad loans worth billions in the banking sector, government funding troubles and "substantial" risks to its financial system. Three of Slovenia's biggest banks are now asking for capital injections from the state. The ratings agency also cited the swiftly rising interest rates on Slovenian government bonds as one factor in its decision.

Already in early July, the first formerly communist Eastern European country to join the euro zone was suggested as a possible sixth candidate for bailout funding. But the government denied that it would require help from Brussels or the International Monetary Fund. Spending cuts had staved off the danger for the time being, Prime Minister Janez Jansa said at the time.

But on Thursday, Moody's warned that the Slovenian government is struggling with increasing refinancing costs and limited access to financial markets, while the country's banks are increasingly dependent on liquidity from the European Central Bank (ECB). There is also a high possibility that the country's three biggest banks -- Nova Ljubljanska banka (NLB), Nova Kreditna banka Maribor (NKBM) and Abanka Vipa -- will need fresh capital amounting to between 2 and 8 percent of Slovenia's gross domestic product (GDP), Moody's said.

Slovenia's dire financial situation will only be intensified by weak economic growth, the ratings agency cautioned. The agency further noted that Ljubljana has failed to get a grip on its budget deficit, which could exceed the 3.5 percent of GDP allowed under euro-zone rules aimed at ensuring the common currency's stability.

Economists inside Slovenia are also no longer banking on their country's ability to master its financial problems on its own. Respected Slovenian economist Joze Damijan recently said that the only remaining options were either applying for a full bailout from the European Union's euro rescue fund, or taking the Spanish approach, seeking aid money for banks alone.

Damijan estimates the volume of bad loans at Slovenian banks to be between €6 billion and €8 billion ($7.3 billion to $9.8 billion). The clean-up of these toxic assets could bloat the budget deficit to between 20 and 28 percent of GDP and thus drive up yields on Slovenian bonds to more than 12 percent, he says. "These are interest rates with which no country can finance itself in the mid-term, much less in the long-term," Damijan said. "In this case, Slovenia must follow the examples of Greece, Ireland, Spain and Portugal, and ask for EU aid."

Like Cyprus, which applied for an EU bailout in July, Slovenia is likely too small to dramatically intensify the euro crisis. Nevertheless, the prospect of having to support a sixth country comes at a particularly inconvenient time for European leaders. Given the limited resources of the permanent euro-zone bailout fund, the European Stability Mechanism (ESM), discussion has turned to whether the European Central Bank should begin making mass sovereign bond purchases. The bank currently says it has no plans to do so.

Since September, the biggest ratings agencies have repeatedly downgraded Slovenia's creditworthiness, citing the sluggish pace of financial reforms. The country has slipped from 45th place to 57th place in the global competitiveness rankings compiled by the World Economic Forum, which points to problems that include restrictive labor laws, inefficient bureaucracy and limited access to credit.

Furthermore, Slovenia is heavily dependent on exports, with some 72 percent of the country's exported goods going to other EU countries -- mainly Germany, Italy, Austria and France. Slovenia's most important products are its cars, automobile parts, chemical and pharmaceutical products, electronics, lumber and furniture.

Part of the EU since 2004 and the common currency since 2007, the country with 2 million residents and an economic output of some €35 billion is among the smallest members of the currency union. But the debt crisis has hit the Slovenia hard, driving GDP down by 8.1 percent in 2009. After a brief recovery, the country has since fallen into a new recession. 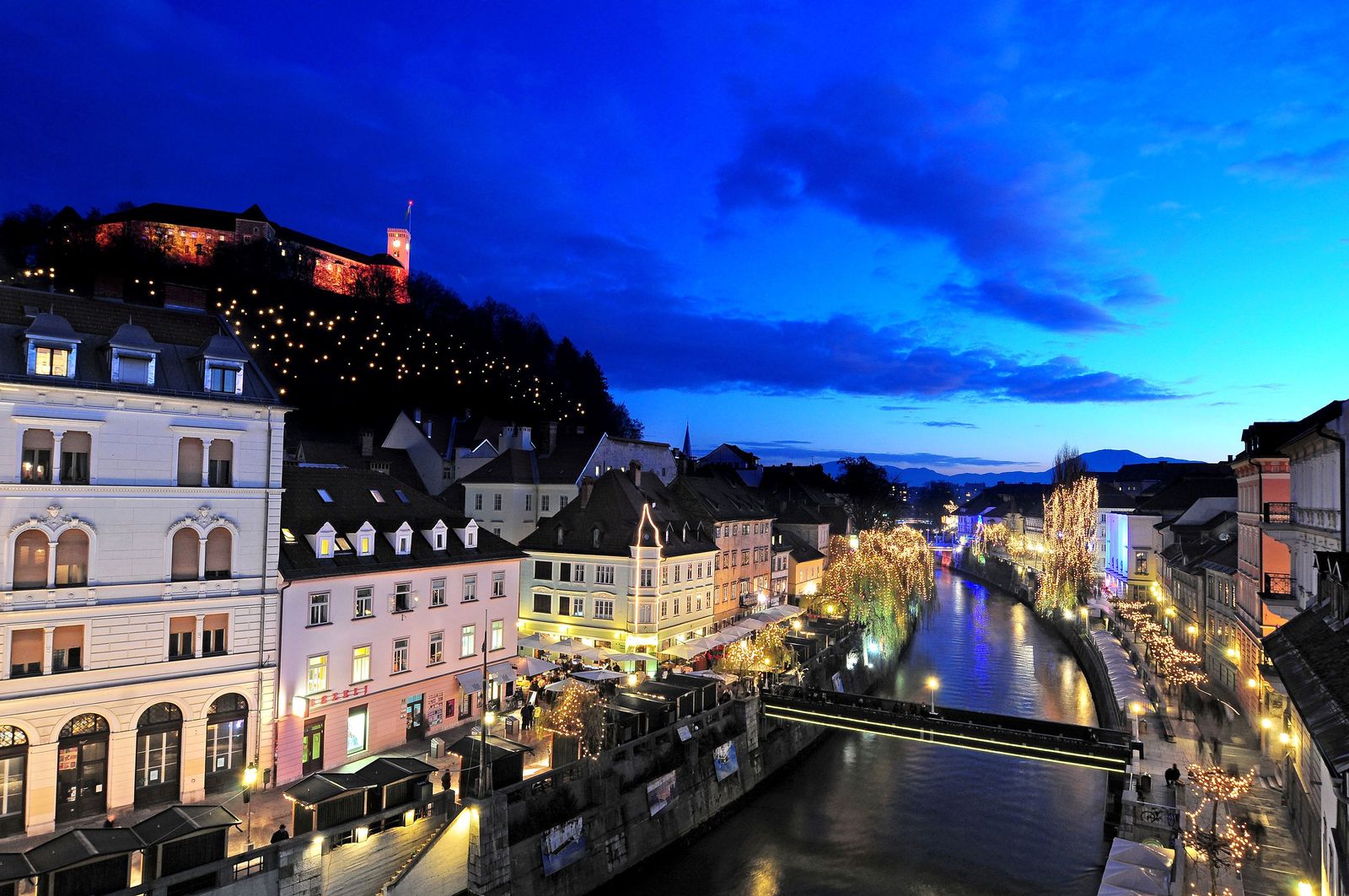 Ljubljana by night: Has the sun set on Slovenia's economy?