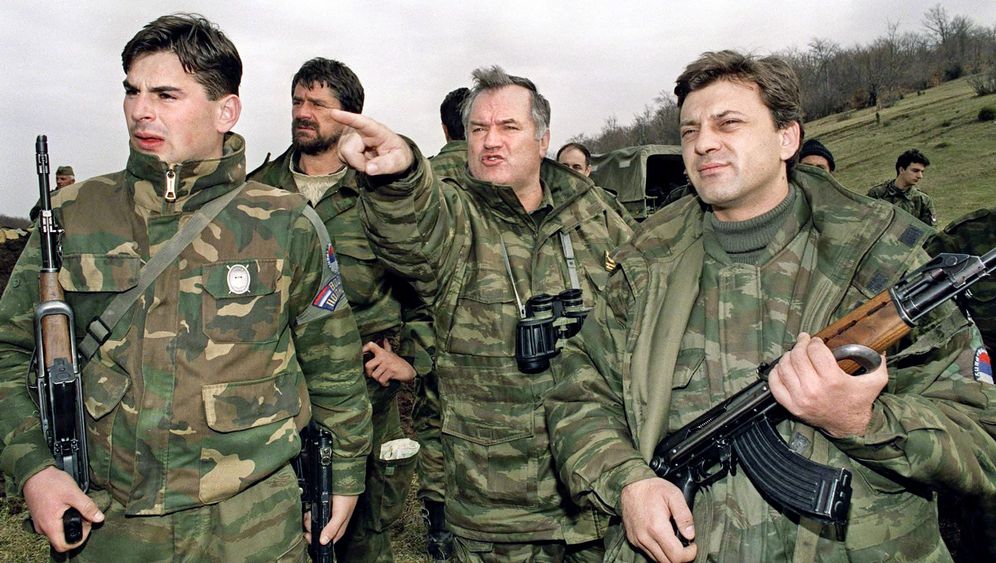 A number of documents belonging to Ratko Mladic were seized during a search of his Belgrade villa on Feb. 23, 2010. In the documents, the Bosnian-Serb military leader -- who was finally arrested last week -- made notes of important discussions that had taken place in his presence. The documents have been accepted as evidence by the war crimes tribunal in The Hague. Entries were often made only in note form and are difficult to understand without further explanation. Nevertheless, they still reveal Mladic's thinking; his hatred of other ethnic groups and the paranoid world view held by the general. And they also confirm that it was, above all, President Slobodan Milosevic and his various chiefs of staff who paved the way for Mladic's military victories in Bosnia.

Thursday, Jan. 14, 1993: Momcilo Krajisnik (premier of the Bosnian-Serb Republika Srpska) said at a meeting with Yugoslavian President Dobrica Cosic in the presence of Mladic: "I want a close bond with Belgrade. We want a monetary union with Serbia. We can no longer cheat our people." Mladic noted down the quote.

Tuesday, Jan. 19, 1993: Russian Colonel Gennady Sorokin said during a meeting with Mladic that the Jews wanted to rule the world: "Because of the Jewish wife of President Boris Yeltsin, we could not prevent the sanctions against Serbia."

Thursday, Jan. 21, 1993: At a meeting in the Bosnian town of Pale, Mladic, Bosnian-Serb leader Radovan Karadzic and Yugoslav General Zivota Panic lamented the lack of discipline in the army. The condition of the Drina Corps is disastrous, they said. Panic recommended Maldic use shootings if necessary to improve Army discipline.

Friday, May 7, 1993: Karadzic urged Mladic to hold back on capturing any further villages. It would be a "disaster" if the provocation spurred Nato to intervene.

Friday, May 28, 1993: At a meeting in which Mladic took part, Yugoslavian Prime Minister Radoje Kontic recalled that despite the delicate economic situation, Belgrade had spent half its budget in the first five months on ammunition and war supplies which had been delivered to the Bosnian-Serb army. Mladic noted that Serbian President Milosevic said: "We have spent a billion dollars on the war in Bosnia and Croatia."

Monday, Dec. 13, 1993: Karadzic remarked to Milosevic and Mladic: "Now is an opportune moment to end the war. We hold 75 percent of the territory; we will gain a route to the sea through political means. Sarajevo is the key to victory."

Saturday, Jan. 29, 1994: Mladic explained at a meeting with army personnel in Vlasenica: "You have to thrash the Muslims for long enough that the whole world sees that it does not pay to fight against Serbs. The most important point is Sarajevo; that is the brain of their state. With the blockade of Sarajevo, we have established our state. We must not now make any martial statements; we must speak of peace. Only in that way can we save Serbia from a blockade. Our interest is the founding of a pan-Serbian state. Perhaps Europe will not allow us this right away; it does not want a Greater Serbia."

Saturday, April 23, 1994: At a meeting with his high command, Mladic noted: "The Turks (as Mladic called the Bosnian Muslims) have no organized military force in the enclaves of Gorazde, Zepa and Srebrenica. We should neutralize them in the near future, if necessary with military force."

Friday, July 14, 1995 (three days after the capture of Srebrenica): After a meeting with Milosevic, the Swedish UN representative Carl Bildt and French General Bertrand de la Presle in Belgrade, Mladic stated: "Bildt has information that in Bratunac (near Srebrenica) numerous Muslims were captured. He says we must do something over the weekend, or else there will be problems. The men must be freed. Furthermore, Bildt demanded that we set free 48 Dutch soldiers who are with us."

One day later, he wrote that he had been confronted by British General Rupert Smith with the accusation that there was information on murder and rape committed by Serbian soldiers after the capture of Srebrenica.

Monday, Sept. 18, 1995: In Belgrade, Serbian general Dragan Radenovic offers Mladic on behalf of the Russians weapons with tremendous destructive power. Price per unit: $52,000. Moscow would sell the weapons to the Bosnian Serbs via a third country. "The Russian secret service would in addition send us numerous other military items. Supposedly the contact had the support of Yeltsin," he wrote.

Sunday, Oct. 1, 1995: A delegation from the Russian armed forces offered further support to Mladic in Bijeljina. The only condition, he wrote, was that Serbia did not permit any Nato troops to be stationed on its soil.

Friday Dec. 8, 1995: Mladic met with General de la Presle, who informed him that President Chirac would be firmly on the Serbian side after the war -- if he, Mladic, released two French pilots being held captive at the time. He had been instructed to return the pilots, dead or alive. Otherwise, France would withdraw its troops from Sarajevo, which would very much accommodate the Muslims.

Mladic demanded that he would not be brought before the war crimes tribunal in The Hague. In his opinion, it was those who bombed the Serbs who should be brought before the tribunal. "The time has come, General, when the large ones must obey the little ones. If you and England and the USA want to, then you can die for the Muslims." De la Presle pointed out that Milosevic had signed the Dayton Accords a few days earlier. Mladic answered by saying: "He had no right to sell Serbian territory or me. He has no right to my life."