Chancellor Angela Merkel was at a reception hosted by the conservative newspaper Frankfurter Allgemeine Zeitung in Berlin when she heard the news of Silvio Berlusconi's imminent resignation on Tuesday evening. What Merkel thought about the Italian prime minister's plan to step down is not known. She did, however, say what she expects from Italy regarding the euro crisis. "Italy must strengthen its consolidation efforts -- and the Italian government knows that," she said in an interview with the German news agency DPA. "It has produced a plan that must be implemented now."

Other German politicians were more candid in their reactions to the news of the imminent departure of the EU's most flamboyant leader, however. Michael Fuchs, deputy floor leader for Merkel's conservative Christian Democratic Union, is a passionate fan of Italy and speaks fluent Italian. "I'm really relieved, " he admitted in remarks to SPIEGEL ONLINE on Wednesday.

Fuchs, who belongs to the business-oriented wing of his party, hopes that a more serious prime minister in Rome will send a strong signal to the markets. "The yields on Italian bonds will fall when there is a new face in power," he said. Fuchs already has a preferred candidate in mind: Mario Monti, a former EU commissioner, who is currently being discussed as a possible successor to Berlusconi. Fuchs praised Monti, who he knows personally, as "very respectable, extremely well connected, multilingual and possessing European expertise."

Rainer Brüderle, floor leader for the business-friendly Free Democrats, declined to comment on Berlusconi as an individual. "I don't want to be the schoolmaster from Berlin," he told SPIEGEL ONLINE. "The Italians are a very proud people." He added, however, that he hoped there would soon be a "stable government in Rome."

It's safe to suppose that Chancellor Merkel is not overly pained by Berlusconi's political demise. The relationship between the two leaders was strained, despite the fixed smiles they put on at international summits. Recently, Merkel's spokesman, Steffen Seibert, even had to interpret the chancellor's facial expressions in relation to Berlusconi. At the recent European Union summit on the euro crisis, Merkel and French President Nicolas Sarkozy had grinned when asked by a reporter whether they still trusted Berlusconi. The Italian prime minister later claimed that Merkel had apologized to him for the incident -- something that Seibert had to promptly deny. "No apology from the Chancellor because there was nothing to apologize for," wrote Seibert in a Twitter message.

The absurd example shows the extent to which Berlusconi has become a laughing stock. When the prime minister's name is mentioned in Berlin these days, it mainly elicits head-shaking. In off-the-record conversations, German politicians show a mixture of amusement, incomprehension and concern when discussing Berlusconi, who has become notorious for his vanity and his "bunga bunga" parties with young women. Germans continue to love Italy as a country, but they would prefer to have someone else as its leader.

There has been no shortage of diplomatic gaffes. Germans have not forgotten how Berlusconi humiliated Merkel at a NATO meeting two years ago in front of television cameras. While the German chancellor stood waiting to greet Berlusconi, the Italian leader turned away, talking into his mobile phone. Even worse was an unprintable comment about Merkel's physical appearance reportedly made by Berlusconi during a recent wiretapped telephone conversation with a now-jailed entrepreneur. Berlin declined to comment.

Berlusconi has a long track record of getting on the nerves of German politicians. Even the conservative former Chancellor Helmut Kohl had a low opinion of the man. In the 2006 Italian election campaign, Kohl demonstratively supported Romano Prodi, the candidate of the center-left coalition, over Berlusconi, even making a special trip to Rome to appear with Prodi.

Those who have found themselves in Berlusconi's crosshairs have sometimes even benefited from the attack. The Italian prime minister made Martin Schulz, a center-left German member of the European Parliament, instantly famous outside Brussels when he attacked him in July 2003. "Mr Schulz, I know there is in Italy a man producing a film on the Nazi concentration camps," Berlusconi said. "I would like to suggest you for the role of Kapo (ed's note: an inmate appointed as a supervisor). You'd be perfect." Earlier, Schulz had criticized Berlusconi in a strongly worded speech.

The verbal outburst resulted in a mini-crisis in German-Italian relations. Berlusconi had to telephone then-Chancellor Gerhard Schröder and express his regret. But the incident did not damage Schulz's career. Schulz is expected to soon become the new president of the European Parliament. By that time, Berlusconi may no longer even be in office.

Such incidents are trivial given the problems that Italy currently faces. Berlusconi's irreverent manner -- he recently also made fun of the euro -- is hardly appropriate in the dramatic situation. Given the recent sharp rise in interest rates on Italian sovereign bonds, the country is threatening to become the euro zone's next crisis country.

Berlusconi's departure from the political stage has increased confidence in Berlin that Italy, whose economy is regarded as robust, will weather the crisis. But there are also concerns. Even if Berlusconi's style irritated other politicians, his governments did remain stable -- something that has not always been the case in Italy.

"Berlusconi is not popular among German politicians," says Philipp Missfelder, a foreign policy expert for the conservatives. "But I hope that the party system in Italy does not fall apart now and that there are not elections every few months once again." 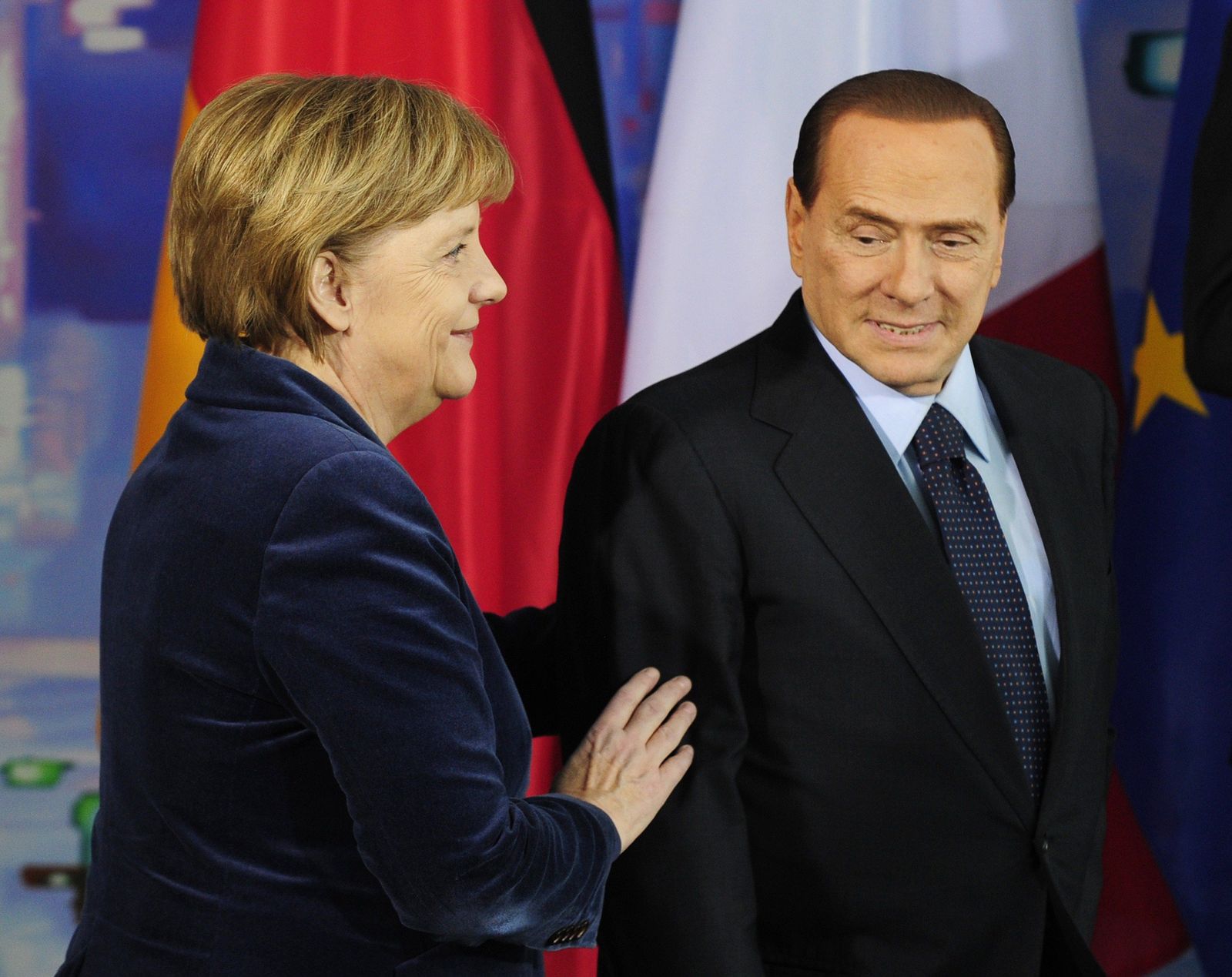 Don't be deceived by the smiles.