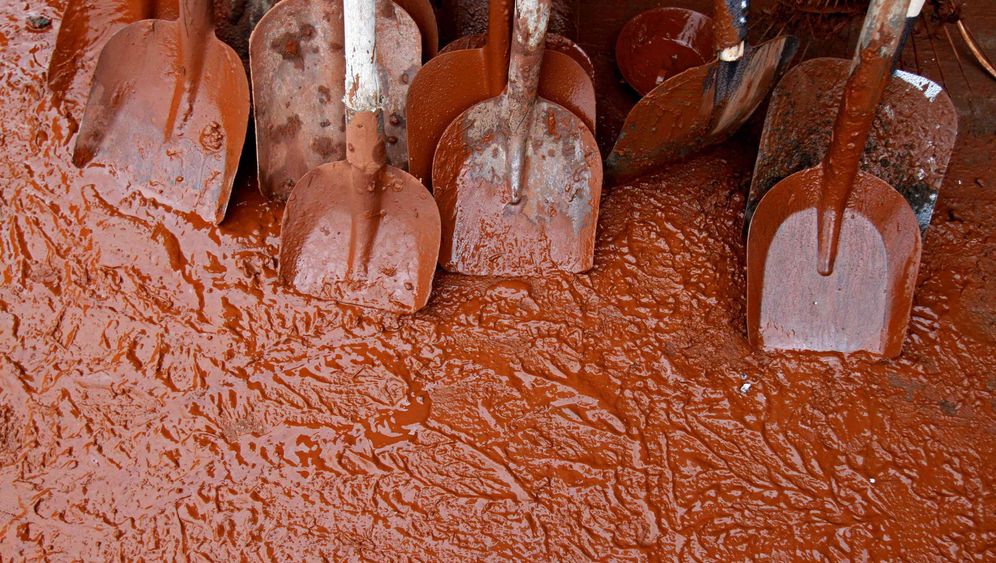 Concern was widespread. With the toxic sludge from the massive industrial accident in west-central Hungary having reached the Danube on Thursday, many were concerned that the river's ecosystem was in grave danger.

On Friday, however, officials were hopeful that the worst had been averted. Even as countries downstream from Hungary, including Serbia, Croatia and Romania, were drawing up emergency plans, alkalinity levels in one of Europe's biggest rivers had not reached dangerous levels and there was hope that they had stabilized or begun to fall.

"The current pH level in the Danube is absolutely not dangerous for the flora and fauna of the river," Tibor Dobson, spokesman for Hungary's emergency services, told Bloomberg on Friday. "It appears that we managed to save the river's wildlife."

Officials said on Friday that the Danube seemed to be largely unharmed by the caustic slurry flowing into the river. Workers have been pouring massive amounts of gypsum and vinegar into affected tributaries in an effort to neutralize the highly alkaline sludge released in the disaster. Furthermore, the sheer volume of water in the Danube has lessened the spill's impact.

Nevertheless, Hungarian officials formally asked the European Union for assistance in cleaning up the spill on Thursday evening. Budapest is looking for experts to help reduce the environmental damage from the spill and to clean up the toxic muck left behind. Concern is also mounting that dry weather could turn the red mud into dust, thus increasing the risk of it being inhaled.

In comments warning of the heavy metals such dust might contain, Hungarian Environment Minister Zoltan Illes said on Thursday that "wind could blow ... that heavy metal contamination through the respiratory system." Dobson urged residents near the spill site to wear masks to protect themselves. Greenpeace on Friday said that tests had shown high levels of both mercury and arsenic in the sludge.

The spill occurred on Monday after a reservoir belonging to a nearby alumina factory burst, releasing up to 700,000 cubic meters of slurry which then flooded three nearby villages. It killed at least five people and injured well over 100, many of them suffering chemical burns. The amount of sludge released was only slightly less than the volume of oil released during the entire BP oil disaster in the Gulf of Mexico over the summer, officials said on Friday.

The toxic waste, produced by a company called Magyar Aluminium Zrt., completely covered a 41 square kilometer (16 square mile) area and flowed into several streams and rivers. All wildlife was extinguished in the Marcal River, with pH levels there measuring as high as 13.5 on a 14 point scale. A measurement of between 7.5 and 8.5 is considered normal for water.

It remains unclear as to why the reservoir failed. The factory has said the reservoir had shown no signs of damage during a recent routine check and blames recent wet weather for the disaster. Others, however, have claimed that the reservoir was dangerously overfilled and that the sides had shown signs of cracking. Such sludge reservoirs are used to store waste created in the production of alumina, a product used in the production of aluminium. Once the water evaporates over time, the residue left behind can be more easily disposed of.

In order to avoid a repeat of the disaster, officials are draining a second reservoir nearby. The contents are being slowly released into the already-dead Marcal River and gypsum is being added to neutralize the alkalinity of the mixture.

Local villagers have been unrelenting in their criticism of the response by Magyar Aluminium. The company has said that the sludge was not considered to be hazardous waste by EU standards and has also rejected responsibility for the disaster.

'No Point in Going Home'

"If you won't own up to it now, just what do you think you are doing here then?" a woman screamed at company director Jozsef Deak during a meeting with locals on Thursday, according to Reuters. "Why don't you take off your shoes and walk back to your factory right through the mess you caused?"

The company has contributed €110,000 to the cleanup effort. Officials have said, however, that much of the agricultural land flooded by the muck will be unusable for years to come. Authorities in one of the villages hardest hit by the disaster, Kolontar, have said that 34 homes are unfit for habitation.

"The whole settlement should be bulldozed into the ground," yelled Janos Potza, a Kolontar resident protesting outside of the mayor's office, on Wednesday according to the Associated Press. "There is no point in anyone going back home."