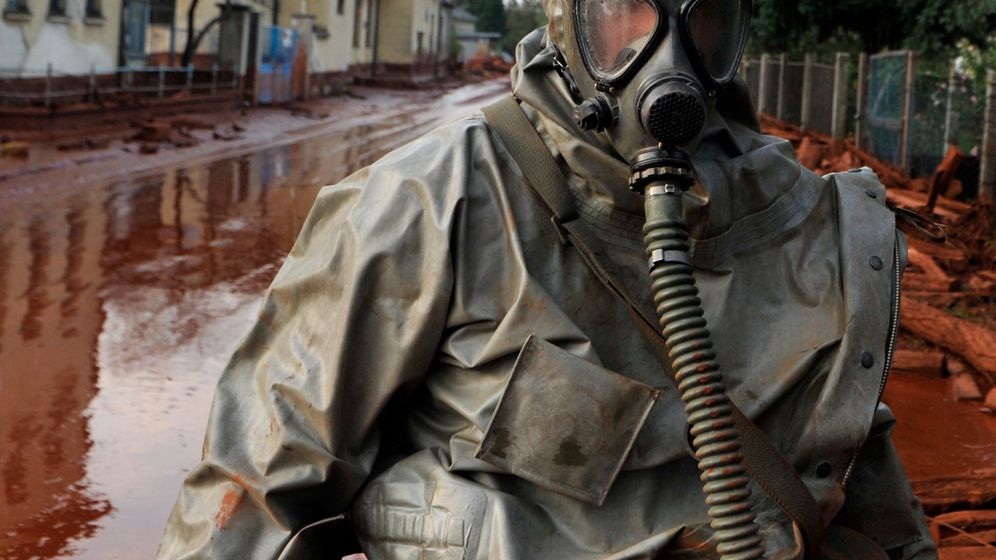 The red poison covers streets, fields and meadows. Bridges and houses have been swept away or badly damaged. At least four people are dead -- all killed in the biggest environmental disaster Hungary has ever seen. The caustic sludge has spread across several areas in western Hungary after leaking from a reservoir in an alumina refining plant. At least 1 million cubic meters of the red sludge, a mixture of lead and other heavy metals, has contaminated an area covering 40 square kilometers.

"When I heard the roar of the floods I only had enough time to jump out of the window and run to higher ground," said Tunde Erdelyi of Devecser, a town about 150 kilomters southwest of Budapest. One of her relatives had to be taken to the capital city by a rescue helicopter. The corrosive mud had "burned him to the bone," she said. In Erdelyi's house the poisonous red slime was still 1.5 meters high on Tuesday morning. The rescue workers had to break down the door with an ax in order to allow the mud to escape. On the streets around the house, a layer of sludge around 10 centimeters deep has built up, news agency AFP reported. Almost one-third of the buildings have been damaged.

Not everyone was able to escape in time. At least four people died, and 61 injured people have had to be treated at hospitals, according to the Interior Ministry. Another six people are still missing. In all, 7,000 people have been affected. The dead include a three-year-child, Karoly Tily, the mayor of the village of Kolontar, said.

A Disaster for the Water Supply

The government in Budapest is calling the massive leak an "environmental catastrophe." "The soil in the region is completely soaked through and red," Robert Damasi of the Environment Ministry told SPIEGEL ONLINE. Since Monday, the ministry has been trying to get an overview of the "gigantic accident," but Damasi is already sure of one thing: "Nothing like this has ever happened in Hungary before." He says authorities will have to await the results of a preliminary investigation for more accurate information. "We hope to be able to say something more exact in a few days," he said.

A state of emergency was declared on Tuesday in three districts as the toxic sludge continued to seep out of the factory. The residents of the villages of Devecser, Kolontar and Somlovasarhely have been endangered, as have the flora and fauna in the area, says Environment Minister Zoltan Illes. The Raba River, which flows into the Danube, is threatened with contamination. The deputy head of the water management company for western Hungary, Sandor Toth, said that the toxic sludge could reach the major European river in four to five days. "From the point of view of water supply, a disaster has occurred, since the Torna creek, into which the mud has entered, flows into the Marcal rivulet, which flows into the Raba, a tributary of the Danube," he said.

"We have poured tons of cement into the Marcel and hope that this will stop the toxic flow," a spokeswoman for the National Disaster Unit (NDU) said. The danger of the substance diminishes with every kilometer, she said, adding that they wanted to prevent serious environmental damage. Interior Minister Sandor Pinter said that drinking water had not been affected so far. There was, he said, a "good chance" that the poisonous slime would not reach the Danube.

Greenpeace has warned of the consequences for the natural environment, saying that the bauxite sludge poses a danger to drinking water and vegetation. "The red mud is leaving a deposit and ravaging the scenic areas," said Zsolt Szegfalvi, head of the environmental group in Hungary. The wind could then blow these dried mud particles up to 15 kilometers further. "We are going to, therefore, send a team immediately to Kolontar and Devecser, where the most problems are appearing at the moment," he said. Greenpeace wants to take samples in order to investigate and document the full scale of the disaster.

The accident occurred at 12:10 p.m. on Monday in the alumina plant in Ajkai, around 165 kilometers west of Budapest. For reasons that have still not been established, a reservoir burst, and the thick red sludge spilled out, mixed with the floodwater that had afflicted the region for days and flowed through several villages -- in places the toxic sludge has been one and half meters deep.

Hundreds of people either lost their homes or were forced to abandon them. Cars were washed away and some people were only rescued at the last minute. Many people suffered from irritated eyes and chemical burns. Many of the injuries only became apparent later and could cause damage to the deep dermal tissue, said Peter Jakabos, a doctor in the hospital at Gyor, who is treating those affected by the sludge. The Interior Ministry has advised anyone who has come into contact with the red mud to immediately wash their skin with a lot of fresh water and change clothes.

According to the ministry, the situation is now "under control." The military has sent in 140 troops, while 350 police officers, over 100 fire fighters and the NDU are all on the ground. Four helicopters have been deployed to ferry the injured to hospital. The residents were evacuated during the night and rescue workers in special protective suits have been hosing down the streets to wash away the red sludge.

An employee with MAL, the firm that operates the alumina plant, told SPIEGEL ONLINE that the company directors are at the site. The firm, which had earlier belonged to a state aluminum holding company and was privatized after the fall of communism, spoke of a "natural disaster that could not have been foreseen." The dike in one of the reservoirs had broken and the red sludge, a by-product of the manufacture of alumina, used in the smelting of aluminum, had escaped. The mixture was manufactured according to European Union regulations, the company said.

Who Is to Blame?

The authorities will now have to determine if this is a correct representation of what occurred. Was the reservoir sufficiently secured according to the legal standards? Was the substance processed according to the rules? Damasi of the Environment Ministry says the authorities are now investigating whether it was actually an accident or whether MAL is to blame.

Prime Minister Viktor Orban has said he thinks it is possible that human error could have caused the accident. So far, there are no indications of a natural cause, he said late Tuesday at a press conference. He added that there was no danger of any radioactive contamination.

Environment Minister Illes told the German-language online newspaper Pester Llyod, that the company would have to cover the costs of the clean-up operation -- including the deployment of rescue workers, treatment of the injured, cleaning and repairing the affected areas, clearing away the contaminated soil up to 10 kilometers near the spill, cleaning the waterways and all the costs of renaturation and reforestation. That could all last months and costs many millions of euros.

According to Pester Lloyd, there is also growing criticism of the authorities. They are accused of not taking the accident seriously enough at first. The NDU, for example, only took over the coordination of the rescue effort at a late stage.

The accident highlights the continuing difficult environmental situation in Central and Eastern Europe. In January 2000 in the northwest Romanian town of Baia Mare, not far from the Hungarian border, sludge containing cyanide escaped when gold mine reservoir burst. That toxic spill killed a massive amount of fish in the Hungarian and Serbian parts of the Tisza River.