Many had hoped that Sunday parliamentary elections in Romania might show a way out of the damaging rivalry between the country's prime minister and president that has paralyzed the country for months. Such hopes, however, proved to be in vain, with official results indicating that the country's ruling party has scored a landslide victory, taking nearly three-fifths of the seats in parliament and up to 60 percent of the total vote.

The result seems likely to escalate the embittered showdown between Prime Minister Victor Ponta and President Traian Basescu even as Romania is struggling to pay debts, grappling with corruption and dealing with massive anti-austerity protests. Prior to the vote, Basescu said he would not appoint Ponta prime minister should Ponta's Social Liberal Union party come out ahead, a continuation of a power struggle the two have been engaged in for months. But Sunday's results could make the pledge a difficult one to uphold.

"We won a clear majority, a majority recognized by our adversaries who have to accept the rules of democracy," Ponta said on Sunday evening. "I assure them we will treat the opposition with the respect that we did not get when we were in opposition."

Of particular concern is an expiring, €5 billion funding deal between Romania and the International Monetary Fund. A successor agreement must be found by early 2013 and any delay could be damaging to the country's already fragile economy and currency. The good of the country, however, has not always been at the forefront as Ponta and Basescu, whose party took less than 17 percent of Sunday's vote, have bickered at the highest possible level in a battle over power, corruption and the future of democracy in Romania.

Resolution to the 'Civil War'?

Ponta, who plagiarized sections of his Ph.D. thesis and padded his resume with fake master's degrees, spent much of the early part of the year attempting to engineer Basescu's impeachment, a bid which only failed because turnout for a referendum on the president's future fell just short of the 50 percent minimum. Of those who voted, an overwhelming majority were in favor of Basescu's ouster, though the president had asked his supporters to boycott the vote.

Ponta has likewise called Basescu, a "scorpion that kills everything around him," the "biggest liar in Romanian history" and a "man without shame or honor."

Though Ponta said he would accept the results of the impeachment referendum in an interview with SPIEGEL, he later attempted to get the voter turnout changed and struggled through a scandal that saw his interior minister resign as a result of an effort to get 2 million Romanians abroad stricken from voting rolls.

Ponta said on Sunday he hopes the political "civil war" will be solved by the vote. But, Basescu's presidential post does not expire until 2014 and he is now tasked with appointing a prime minister. Still, given that parliament must approve Basescu's choice, it seems unlikely he would be able to nominate anyone other than Ponta. Furthermore, a continuation of hostilities would only further antagonize a Romanian populace that has expressed frustration, in comments and at the polls, with the current state of political fighting.

They aren't the only ones. Ponta was sharply criticized by the European Union during his machinations aimed at toppling Basescu, particular moves that many interpreted as an overstepping of his constitutional powers. In July, the EU blasted Romania in its regular progress report on the country.

"Events in Romania have shaken our trust," European Commission President Jose Manuel Barroso said at the time. It remains to be seen whether Sunday's election is the first step toward restoring that faith. 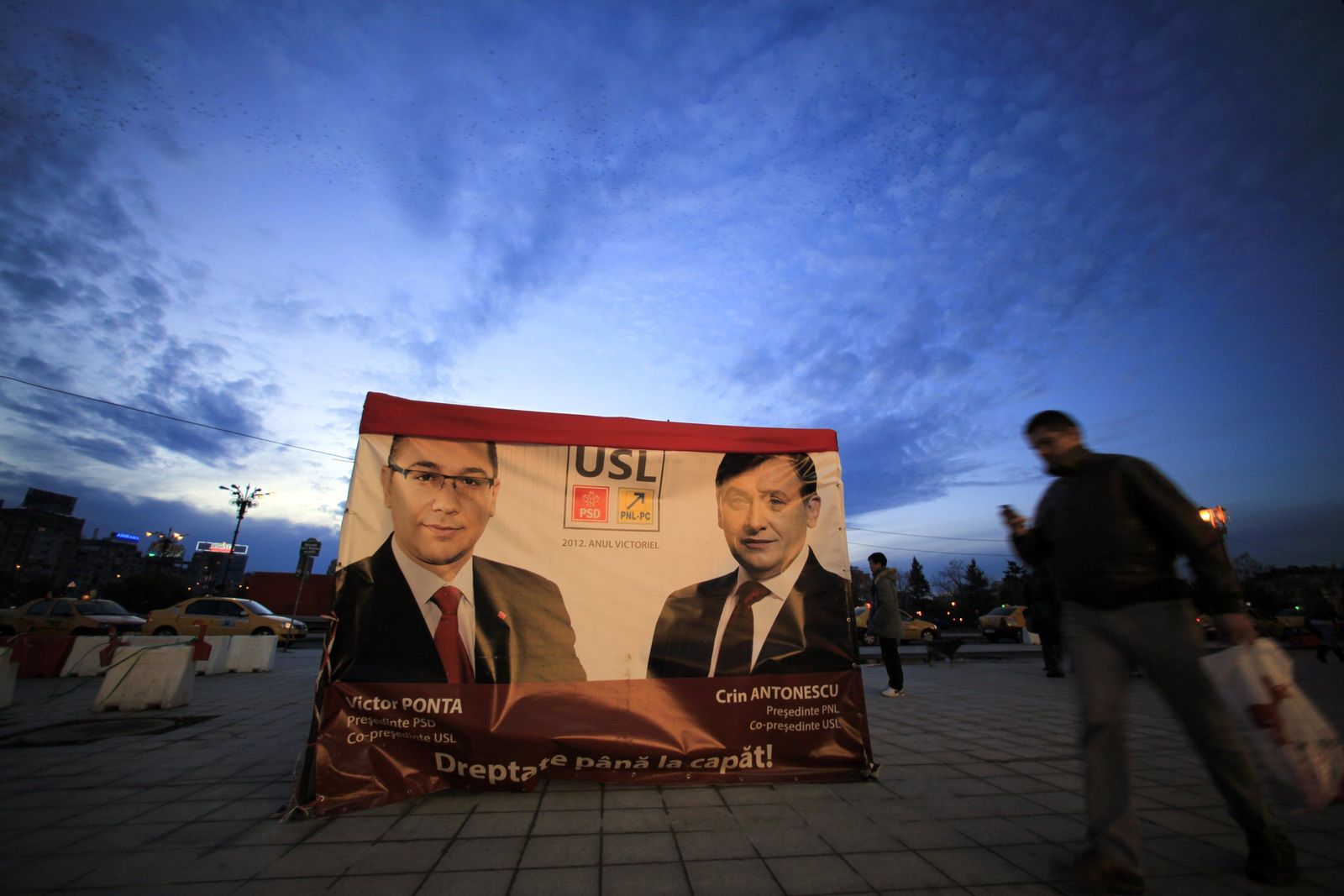 Prime Minister Victor Ponta, here on a campaign poster in Bucharest, appears to have won re-election.