The European Union is becoming a little bit more German. That is perhaps the most important conclusion to be drawn following the one-day summit in Brussels on Thursday. In their communiqué, the 27 leaders pledged tougher savings measures and declared their willingness to share basic data on their national budgets with the EU for monitoring purposes. They also want to do more to increase transparency on the financial markets and, to that end, will publish the results of so-called stress tests performed on leading EU financial institutions.

Budgetary discipline has long been the Germans' hobbyhorse and Chancellor Angela Merkel appeared pleased after the summit. "The path to budget consolidation will be shared by all," she said in the press conference following the talks. She said that there was even a "feeling of togetherness" when the prime ministers of struggling EU members Spain and Portugal presented their austerity plans.

It was a moment that highlighted a marked shift in Europe over the past six months. The initial fear that the hesitant return to growth might be curbed by overzealous budgetary discipline has given way to the fear of rampant national debt. The debt crisis in southern Europe has acted as a catalyst. The change of government in Britain has also strengthened the budget hawks' hand.

Any tightening of the Stability and Growth Pact will inevitably be regarded in Europe as a form of Germanization. No one has pushed harder than Berlin for the increased monitoring and inspection of budgets. The interim report by the task force on reforming the stability pact that EU Council President Herman van Rompuy presented at the summit is a detailed reflection of German concerns.

What Was Decided at the EU Summit

European Union heads of state and government have agreed to increase sanctions against Iran. The new sanctions list includes a prohibition on new investments and technical assistance in the oil and natural gas sector. In addition, the list of products banned due to the possibility that they could also be used for military purposes has been extended. The EU is seeking to freeze assets belonging to members of the Revolutionary Guard and to broaden travel restrictions.

"Iran has not taken the many opportunities which have been offered to it to remove the concerns of the international community," the concluding paper reads. The new sanctions go beyond the recent steps taken by the United Nations.

The EU summit gave the green light to accession negotiations with Iceland. The island nation, with a population of 300,000, applied for membership last year after its financial sector collapsed. The EU has warned Iceland that a condition for progress in the accession negotiations will be Reykjavik's efforts at applying the lessons learned from the financial crisis. The EU expects corrections in the banking sector to be made in order to prevent another financial sector meltdown in Iceland.

Both Great Britain and the Netherlands had initially opposed the accession negotiations because Iceland had refused to fully reimburse British and Dutch account holders who lost billions of euros when Icelandic banks collapsed.

The path is open for Estonia to become the 17th member of the common currency union on Jan. 1, 2011. The European Commission had announced in May that the country, with 1.3 million residents, was ready for the euro. With a budget deficit forecast to be 2.4 percent of gross domestic product this year, and a national debt of 9.5 percent of GDP, Estonia would join the currency union as the member with the best economic fundamentals. It will become the only euro-zone member which adheres to the Stability Pact, which calls for budget deficits of below 3 percent of GDP.

Slovakia was the last country to join the euro zone, in 2009. In 2014, Latvia and Lithuania will likely be eligible to join.

EU leaders have recommended that EU member states introduce a bank levy. The levy is aimed at a fair distribution of the burden caused by the financial crisis. Brussels also plans to support an international bank levy plan at the G-20 summit in Toronto, Canada, on June 26-27. Still, it is unlikely that others will accept such a plan and Canada has already said it would veto a bank levy. The Czech Republic has also said it will not play along.

The bank levy idea came as a result of governments having been forced to spend hundreds of billions of euros to bailout wobbly banks during the financial crisis. The levy would be paid into a pot so that banks can help themselves out of the next crisis.

The EU decided to publish the results of bank stress tests in the future. Just how much risk large banks are exposed to would become public knowledge and would show how prepared they are for economic downturns. The publication of such tests, it is hoped, will put a damper on rampant speculation.

Stress tests are able to show whether financial institutions can weather future economic storms and sudden drops in economic production.

But this summit was anything but clear sailing for Merkel. On the second major issue, preparations for the G-20 summit, the chancellor encountered a serious setback. She had wanted to travel to Toronto next week with unanimous EU support for a bank levy and a global financial transaction tax. The levy plan envisions paying into a fund that would be tapped to cover the cost of future financial crises. The transaction tax, meanwhile, is intended to curb speculation on the financial markets.

But the German-French initiative came up against considerable resistance from other EU members. British Prime Minister David Cameron, who made his debut at a summit, blocked it together with his colleagues from the Czech Republic and Sweden. The discussion "wasn't so easy," Merkel said. In the end, they agreed to a push for "systems of levies and taxes" in Toronto that would see banks cover some of the costs in future crises. The details, however, remained nebulous.

The discussion over a financial transaction tax proved even tougher. Cameron avoided a direct confrontation with Merkel. He ultimately agreed to a vague formulation in the closing document which stated that the EU leaders are united in their desire to "research and develop" a global financial transaction tax. With that, Merkel is now able to state that there is a common EU position heading into the G-20 summit in Toronto. But she didn't convince Cameron.

Indeed, all it took was a single question from a journalist to show that the alleged compromise was pure window dressing. The journalist asked Merkel who, exactly, would "research" this tax. Her answer: "Of course the G-20, or the IMF, I don't know."

Most expect that the tax will be rejected at the G-20 summit, right along with the bank levy. A whole slew of countries -- including Canada, Japan, Australia, Brazil and China have already expressed their aversion to the proposal. Merkel has said that if they reject it, the EU will have to "assemble again" to consider going it alone without international support -- and likely without Britain and, perhaps, others as well.

For Merkel, the transaction tax is particularly important because the €2 billion a year in revenues it is expected to generate in Germany starting in 2012 have already been calculated into Berlin's budget planning. If the tax isn't implemented, then Merkel's government will be forced to find that money elsewhere.

Thursday's finger wrestling served as a reminder of why the idea of an economic government in the EU is still a distant one -- despite the rhetoric in the community about austerity measures. The debate over the Stability Pact is also still in the early stages, and the acid test won't come until October, when van Rompuy's working group presents its recommendations.

Only then will it become apparent which sanctions can be applied against EU member states and the degree to which Brussels can intervene on national budgetary policy. The details are still deeply contested. For the time being, a majority of the member states are rejecting the necessary change to the EU treaties. But Merkel believes they are necessary in order to threaten repeat deficit violators with sanctions like withdrawing their voting rights in the European Council, the body in the EU includes the heads of state and government of the 27 member states.

Merkel appeared exhausted at the end of the summit. She isn't, it would appear, just losing traction in Berlin. The European Union too looks to be slipping out of her grasp. 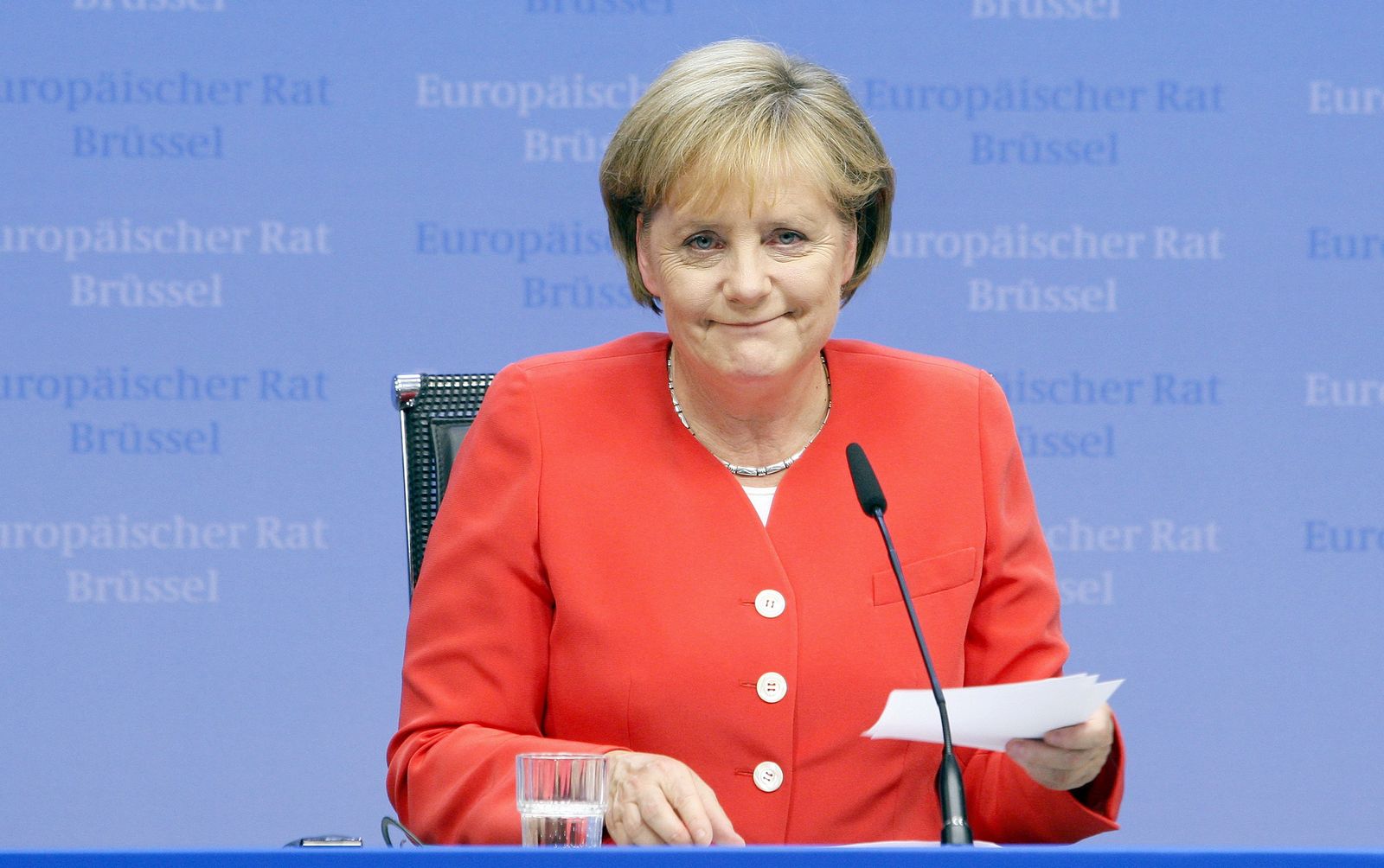 German Chancellor Angela Merkel didn't get everything she wanted in Brussels on Thursday.