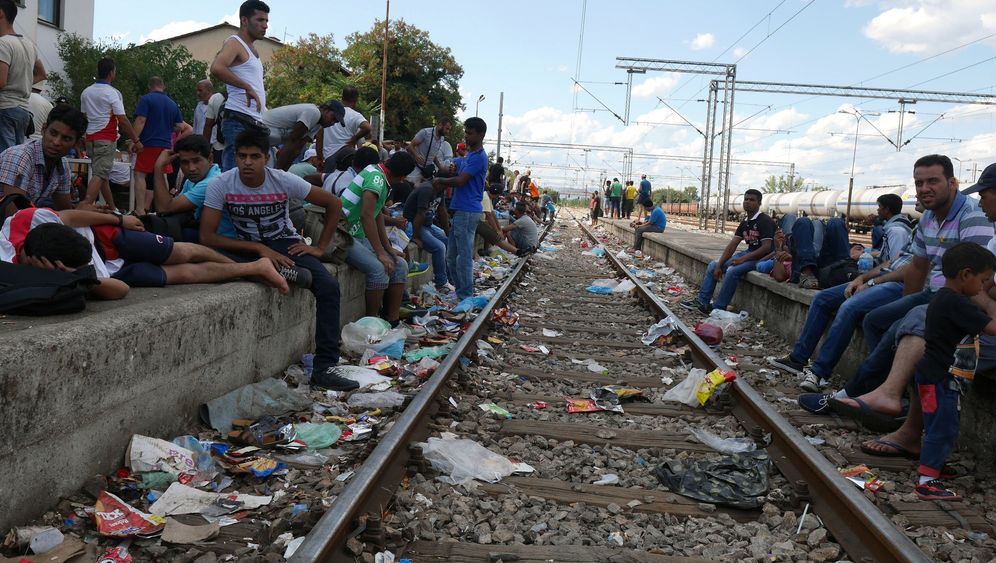 It's Monday, earlier this week, and what can be seen unfolding along the route to Macedonia is no less than mass migration, with around 200 people making their way along the Balkans route to Western Europe on this day alone. They have come here from Aleppo, Homs, Kobani, Tartus, Hama and Damascus. Indeed, much of Syria's population appears to be fleeing at the moment, as they attempt to make their way to safety. The group walks along the railway tracks that lead from the Greek village of Idomeni to the town of Gevgelija in Macedonia.

"Good luck, Kobani!" a family from Damascus calls out as they pass by a group of Syrian Kurds. "Good luck, Damascus," they respond. But they don't make it very far.

They soon encounter five Macedonian police officers waiting along the tracks on the dusty, trampled earth. They order the people to wait without telling them why or for how long. The Syrians take off their backpacks and set them on the ground. Women and children look for a place in the shade. Over the next five hours, the waiting group swells to around 400 people.

Not all are Syrians. A few Iraqis have also made it here. Some are now claiming to be Syrian, which would give them greater chances of success with their asylum applications and expedited procedures. A Syrian man points to eight young men and women from Africa. "Everyone here is from Syria now, even those people over there," he says, grinning.

The people here all have at least one thing in common: They arrived in Europe during recent days via one of the Greek islands located near the Turkish coast -- Kos, Lesbos or Chios. Each day, around 1,000 to 1,500 people arrive on the islands, a greater number than ever seen before. Most want to continue on to Western Europe as quickly as possible. The massive surge of refugees has created a dangerous bottleneck on the main route through the Balkans.

At the edge of the square, two Greek stands have been set up selling fast food, ice cream and water to the refugees. Even though it feels like most in the border region would like to get rid of their uninvited guests, they also seem keen on making a little money before sending them on their way.

After four hours of waiting, a Macedonian police officer finally explains the situation in English. "There's a traffic jam of people up there. It is totally full, and it's life-threateningly dangerous for women and children." A perilous bottleneck has formed in the Macedonian border town of Gevgelija. Only three trains a day travel from the city to the Serbian border in the north, with thousands of refugees competing for seats for each departure.

Under current EU asylum rules, the applicants are technically required to remain in Greece, as the first European country they set foot in. But a court recently ordered that other member states could not order the refugees' return to Greece. The court held that conditions for refugees are too harsh in the financial-crisis shaken country.

Macedonia and Serbia provide documents that allow the refugees to remain in the countries for 72 hours, the period in which they are expected to register and apply for asylum. But three days is also sufficient transfer time to enable them to make their way to Western Europe. Most continue on with their journey.

Five hours pass by in withering heat. A female Greek farmer drops by and hawks apples for €1.50 a kilo. "Vitamins, vitamins," she calls out in Greek.

"Money, that's a vitamin," says Firas, a man from Damascus, who then lets out a chuckle. The man is freshly shaven, having spent the previous night with his family in a hotel. The family comes from a neighborhood in Damascus that is home to diplomats and the wealthy. They stick to themselves.

Firas, who is wearing a clean, light-blue shirt, leans against a tree and peers out at the people waiting. "I also wouldn't have thought that I would one day be traveling together with these kinds of people," he says. The majority of the Syrians here are from far simpler backgrounds than Firas and went through a great deal of trouble just cobbling together the money amongst their families needed for the trip to Europe.

'Do They Speak French in Holland?'

It's often surprising how little the refugees waiting here know about their destination countries. Most want to go to Germany or Sweden -- places where they have heard the conditions are particularly good for refugees. In fact, it is true that every Syrian who enters Sweden is granted an unlimited residency permit -- at least that's the policy for now. But there are already rumblings within the government of a change to this policy in light of the record increase in asylum applications. For most of these refugees, thoughts of Germany evoke the country's world-famous companies. Many believe they will quickly be able to find a job there. Few stop to think that employment as a car mechanic in Stuttgart might be significantly different than the same work in Aleppo.

The refugees also have questions for the European journalists who have come to interview them. "What's the best country?" "Can I get citizenship quickly in Germany? Will my family quickly be able to join me there?" "Is Germany a difficult place?" "Isn't Austria part of Germany?" "I've heard it is cold in Sweden. Is that true?" "I want to go to Holland. They speak French there, don't they?"

Two pregnant women begin searching for a shady area for their children. They start to head over to a row of trees, but a Macedonian police officer doesn't want them there. He hits the women with his Billy club. The move angers the refugees, but the situation doesn't escalate. No one intervenes and the refugees sit back down again. "What a jerk!" they say amongst themselves. "That's what you call human rights?" snipes another.

'I'd Sooner Die in Baghdad'

It's a long, stressful and dreary day. Most of the people here have already been traveling for days, without a break, without sleep and with little to eat. Haider Mohammed, 42, hustles back from the Macedonian border. The Iraqi has given up. "I was in Macedonia for one day. I saw the train station," he says. "I would rather die in Baghdad than stay a day longer in Macedonia."

The situation in Gevgelija is indeed dramatic. Refugees sleep on cardboard boxes on the street. Thousands can be seen waiting in shady areas around the train station. In addition to Syrians, there are many Pakistanis and Afghans here. A ticket saleswoman says that passenger prices for the trains were increased this week on the orders of the station director. The train trip across Macedonia to the Serbian border now costs €10 and the station puts no restrictions on the number of tickets it sells, despite the limited capacity on the trains. Ticket buyers themselves are left to their own devices to figure out how to finagle a seat on board.

The 5 p.m. train arrives at the station and the throng immediately makes its way toward it. No provisions whatsoever have been made here for crowd control. There are no organized lines for those waiting, no differences in ticket categories and no special waiting areas for women and children. All you see is pushing, pulling and shoving, with young men seeming to have the best prospects of making it onto the trains.

The passenger cars quickly fill up. Macedonian police then begin hitting the people waiting for the train in order to drive them off the platform. A Syrian woman cries out in desperation after losing her child in the crowd. A short time later she finds her five-year-old daughter and holds her close. Tears run down the mother's cheeks, but the experience won't keep her from returning to try again the next day.