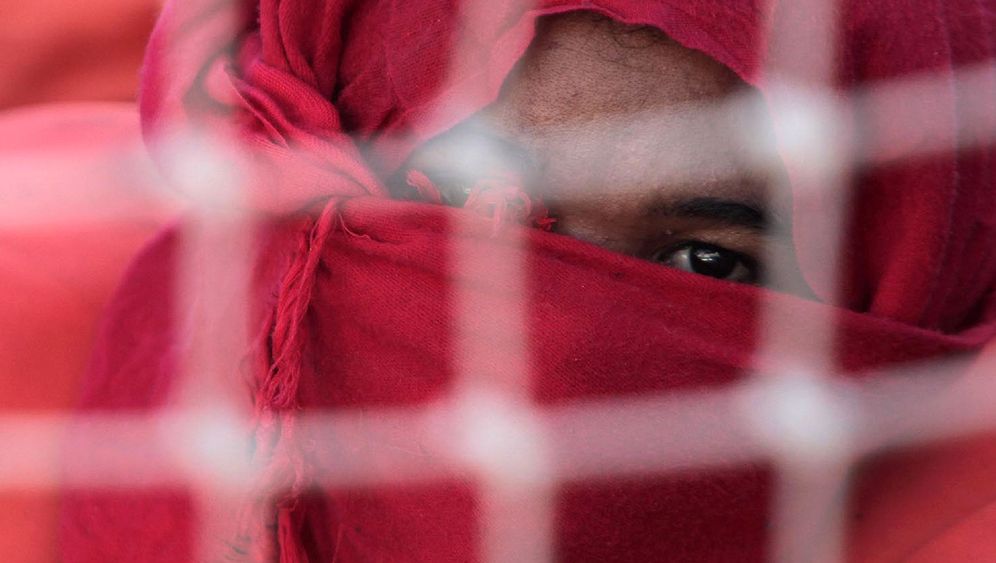 Abdul Kadir Mohamed Moalim has seen hell. Originally from Somalia, a country ravaged by civil war, he traveled via a refugee camp in Yemen and then to Libya. From there, he crossed the Mediterranean to Europe.

On April 16, an overloaded wooden vessel capsized on the high seas and only a few people on board managed to survive. Moalim was one of them. Now, he is in Kalamata, the Greek city that rescuers brought him to. In an interview conducted there by the BBC, he was asked if he had a message for those still in Africa who are waiting for their opportunity to flee to Europe. His answer: "It's so dangerous," he said. "You have to believe in your country and ... stay where you are."

Moalim bore witness to a tragedy in which up to 500 Somalis, Sudanese and Ethiopians drowned, according to the UN Refugee Agency (UNHCR). That would make it the worst such accident of the last 12 months. In April 2015, a fishing boat sank while on its way from Libya toward Italy and up to 800 men, women and children died. Then, too, most of the victims were from sub-Saharan Africa.

Europe continues to focus primarily on the war refugees coming from Syria, Iraq and Afghanistan. But it is often forgotten that increasing numbers of people from countries south of the Sahara are trying to head north as well. In 2015 alone, according to the European Union border control agency Frontex, 108,000 Africans made their way illegally to Europe. That represents an increase of 42 percent over 2014 -- and experts believe the total is but a harbinger of what Europe may soon be facing.

The UNHCR calculates that there are currently 60 million displaced people worldwide. More than half of the military conflicts contributing to that total are to be found on the African continent, in places like Libya, Somalia, Nigeria and Mali. In addition, a devastating drought is ravaging Ethiopia and Eritrea and a famine is on the horizon.

In total, 1.3 million refugees applied for asylum in the EU last year. Prior to its closure in March, the main path to Europe was the Balkan Route, primarily used by Syrians, Iraqis, Afghans and Pakistanis. Now, however, the route across the Mediterranean is coming back into focus. In the summer months, the sea can be crossed with relative ease.

A Cheap Ticket to Europe

Migrant smugglers are quick to change routes in response to political policy shifts. Should the traffic get backed up in one area, as in Greece at the moment, other routes are promoted over social media channels. Recently, that has included the Mediterranean crossing from Libya or Egypt to the Italian island of Lampedusa.

Intelligence agencies are warning that hundreds of thousands of people are now waiting in North Africa for their chance to flee across the sea. Particularly from Libya, the dream of Europe looks closer than ever before: The often inadequately equipped boats put to sea by the migrant smugglers must only leave Libyan territorial waters 12 nautical miles from shore before sending out a distress call. Ships patrolling the waters of the southern Mediterranean as part of the EU operation Sophia must then collect them in accordance with international maritime law. Since September, some 13,000 migrants have been brought to EU territory as a result of this tactic.

Recently, Austrian Foreign Minister Sebastian Kurz warned of the procedure, calling it a cheap "ticket to Europe." At a meeting in Luxembourg a week ago Monday, he and his EU counterparts offered assistance to the largely powerless Libyan prime minister to build up a coast guard. The reality, though, is that as long as the Libyan authorities refuse to grant EU ships permission to patrol Libyan territorial waters in their efforts to combat smugglers, the surge of migrants heading for Europe will not abate.

In March alone, Italy registered 9,676 refugee arrivals -- four times more than in March 2015. Even more alarming, refugees from Syria and Afghanistan -- groups that have been most affected by the closure of the Balkan Route -- haven't yet returned to the path across the central Mediterranean. Currently, the migrants arriving in Italy mostly come from Nigeria, Gambia, Senegal and Guinea, despite the fact that their asylum applications are likely to be rejected, as is the case for most of those coming from Africa. Less than 30 percent of asylum applicants from Nigeria or Mali, for example, can expect to have their asylum applications approved in the EU.

In its report "Risk Analysis 2016," published earlier this month, Frontex wrote: "The challenge here is to increase the ratio between return decisions and effective returns in line with the EU return policy." In other words, migrants whose asylum applications are rejected must be quickly deported. The report notes that prospective migrants are aware of the low probability of being sent back home and know about how easy it is to travel within Europe's border-free Schengen area. It is well known in Africa that those who manage to make it to Europe can usually stay.

A position paper the Italian government submitted to the European Commission in mid-April likewise makes that case that the migrant debate has focused too much on war refugees. "Flows through the Central/Western Mediterranean route are composed mainly by economic migrants," the paper notes, adding that the challenge is expected to last for decades.

Around 1.2 billion people currently live on the African continent, a number that will likely more than double by 2050, according to UN projections. That is one reason why Italian Prime Minister Matteo Renzi's government in Rome is demanding that the EU offer African countries both funding and cooperation on security issues. In a letter to the EU, Renzi also made clear what he expects in return: Financial aid, he wrote, should only be provided to those African countries that are prepared to reaccept asylum-seekers whose applications are rejected by European countries.

Thus far, the European Commission has earmarked 9.2 billion to address the refugee crisis for the years 2015 and 2016. At the EU summit on June 28, European leaders plan to consider whether more money is needed. To the annoyance of the German government, Rome has proposed the issuing of "migrant bonds," which would allow Italy and Greece to raise additional funds. The bonds would be backed in part by Germany.

Italy is feeling the pressure. With its 7,600 kilometers (4,720 miles) of coastline and islands off the coast of North Africa, it is virtually impossible for the country to seal itself off. Furthermore, it will soon become more difficult for migrants landing in Italy to travel onwards toward northern Europe: Austria has begunbuilding a border fence on its Alpine border with Austria at the Brenner Pass. Increased identification checks are to be introduced starting on June 1.

The Swiss and the French have likewise increased vigilance on their borders with Italy on the lookout for unregistered migrants. The fact that many migrants travel through Libya, where Islamic State controls hundreds of kilometers of coastline, has made many nervous, particularly since the terror attacks in Paris in November 2015. There is concern that terrorists could enter Europe disguised as refugees. Frontex has warned that falsified Syrian passports present a significant problem. In particular, Frontex noted in its 2016 risk report, "False declarations of nationality are rife among nationals who are unlikely to obtain asylum in the EU."

Italy's reception facilities, currently holding 110,000 migrants, are already filled to overflowing. Only very few rejected applicants are actually deported, with many of them simply going underground. And with every day that the weather improves and the sea becomes calmer, the number of new arrivals increases. Italy may in fact be in the process of taking on the role that had recently been reserved for Greece: that of bearing the primary refugee burden for Europe.

If Austria now seeks to reintroduce border controls on the Brenner Pass, then "we are faced with the threat that Europe will die here. The Brenner is the symbol of European unity," warns Arno Kompatscher, governor of the Italian autonomous province of South Tyrol, in which the south side of the pass is located. Prime Minister Renzi is also concerned about conditions on Italy's northern border. But Renzi, who has made three state visits to African countries since ascending to the premiership in February 2014, is also casting his gaze toward where the possible roots of the next refugee crisis are to be found. "If we want to fight poverty (and) uproot terrorism," says Renzi, "Africa is our priority today."

Recently, the Italian prime minister sent a message that he takes his own rhetoric seriously. At almost exactly the same time as news of the most recent Mediterranean disaster hit the headlines, Renzi sent three Italian naval ships to a site 130 nautical miles south of Lampedusa. Their mission is to recover the fishing boat that sank there one year ago, together with the up to 600 dead Africans on board.

Autopsies are then to be performed at the NATO base in Melilli -- in the hopes of identifying the dead and providing their families with closure. 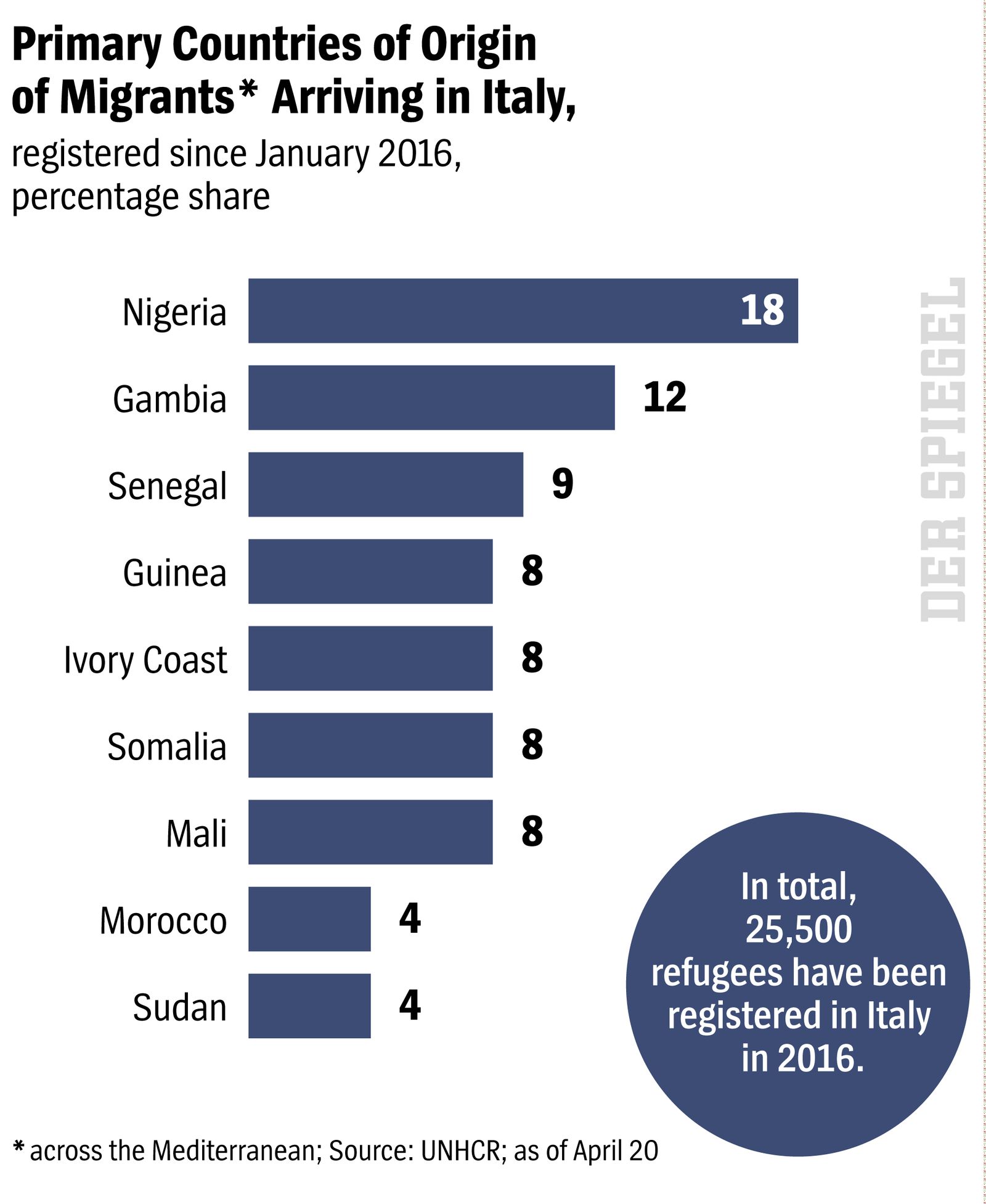