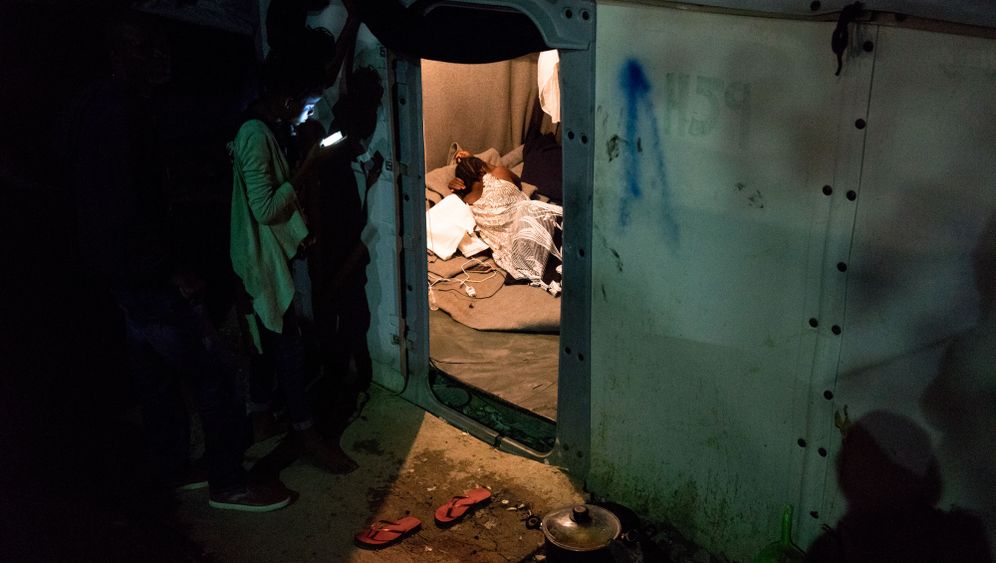 Abdul Shakoor thought nothing could shock him anymore. He has, after all, survived an assassination attempt by Pakistani security agents, he claims, in addition to torture in a Lahore prison. "But I was wrong."

Thirty-three-year-old Shakoor is standing in the Moria refugee camp on the Greek island of Lesbos and pointing at the overcrowded plastic tents inside of which women, children and the ill are lying pushed up against one another, at the cement wall that surrounds the camp, and at the barbed wire. "I would have expected these kinds of conditions in Pakistan or Afghanistan," he says. "But not in Greece."

As a result of the refugee influx, the infrastructure on Lesbos and other Greek islands is in danger of collapsing. Europe's model is no longer working. Although the number of migrants dropped after the EU-Turkey deal came into effect in March, the number of refugees heading for Greece has once again gone up, partially in response to the failed military coup in Turkey on June 15. In August and September, 6,527 refugees crossed the Aegean, twice as many as in May and June. The crisis in Turkey, it seems, isn't just scaring many Turks, it is also driving refugees out of the country.

Currently, there are at least 15,000 migrants on the Greek islands, with the camps available only able to handle half that many. And new boats arrive every day. Skirmishes between camp residents -- and between refugees and locals -- have become a frequent occurrence.

The Greek government is facing a dilemma, says political advisor Gerald Knaus, whose think tank, the European Stability Initiative, helped conceive the EU-Turkey deal. The Greeks, he says, can no longer ignore the chaos on the islands.

'Dead in a Few Months'

If Prime Minister Alexis Tsipras carries through on his recent pledge to move large numbers of refugees onto the mainland, it would be a signal to the smugglers in Turkey that the Aegean Route has reopened. "If the EU doesn't do anything quickly," Knaus warns, "the refugee deal will be dead in a few months."

Darkness falls over Moria. Abdul Kapoor is sitting in friends' shack and pointing to a cell-phone photo of burning tents. In late September, refugees in Moria set a fire out of frustration at the conditions in the camp. Shakoor is expecting further conflicts. "The people are desperate," he says.

He says that he grew up in an affluent family in Pakistan. He father owned land, and Shakoor ran a restaurant and became involved politics. After he switched from the governing party, the Muslim League, to the opposition, his former party allies threatened him with death. He sat in jail for three months in Lahore, was beaten up, tortured with iron rods and given electric shocks. His body is covered in scars and burn wounds. Shakoor has a wife and five children in Pakistan and has chosen a pseudonym for this article out of fear for their safety. He fled to Iran and then to Turkey and Greece. He has been stuck in Moria since March.

According to the agreement, migrants should actually be held in the Greek island camps, registered and then sent back to Turkey after accelerated proceedings. Greek authorities, however, have not acceded to Brussels' demand to recognize Turkey as a "safe country of origin." Instead, they are examining each case individually to determine if the applicant has the right to protection in Europe.

In the wake of the EU-Turkey deal, Greece has only deported 643 migrants, including 53 Syrians who returned to Turkey voluntarily. In September, more refugees reached the Greek Islands every day than migrants left the country in the entire month.

The Greek authorities are overwhelmed by the situation. On Lesbos, nine officers have been charged with making decisions about the applications of 6,000 refugees. One of those officers was briefly hospitalized for burn-out. Several months ago, the EU announced it was sending hundreds of asylum experts to Greece but so far, according to the Greek government, only three-dozen officials have arrived on the islands.

In his Lesbos office, lawyer Emmanouil Chatzichalkias is leafing through the files of refugees who have been stuck in Moria for several months. He says that nobody knows when their applications will be evaluated -- whether it will be a week, a month or a year.

He represents a woman with five children from Afghanistan who arrived on Lesbos in April, but weren't registered by the authorities until early October. Now the mother needs to wait another half-year for her hearing. According to the United Nations High Commissioner for Refugees (UNHCR), fewer than 5 percent of the applications submitted by Afghans and Iraqis have been processed since April. For weeks, the authorities refused to allow a Pakistani who had a heart attack and couldn't be treated on Lesbos to leave. "Lesbos has turned into a prison," says Chatzichalkias.

But why has the number of refugees been rising significantly in the last few months? The reason can be found on the other side of the Aegean, in Turkey.

In a stuffy, neon-lit hotel room in Izmir, a port city in southwestern Turkey, Ziad Zamriq, 33, is waiting for a smuggling boat to take him and his wife to Greece. Sitting next to each other on the bed, Zamriq is holding his wife's hand. "If we had an alternative, we wouldn't be getting onto the boat," he says.

When Zamriq arrived in Istanbul in the summer of 2014 after escaping from Syria, he thought he had arrived at his destination. He found a job in a souvenir shop and rented an apartment on the edge of the city. Zamriq, who had worked as a tourist guide in Damascus, wanted to stay in Turkey.

Even prior to July 15, refugees had trouble earning enough money to make ends meet in Turkey. Although more than 2.7 million people have found refuge in Turkey since the beginning of the civil war in Syria, more than in any other country, most of them live in the big cities, like Istanbul or Ankara, without any kind of support from the government.

Since the attempted coup, Zamriq says, it has become almost impossible for migrants to find jobs. Tourism has collapsed and the economy is stagnating -- and Zamriq lost his job in the souvenir store. He initially got by with odd jobs in construction, factories or restaurants but his wages still weren't enough to pay his rent.

In early July, Turkish President Recep Tayyip Erdogan held out the prospect of Turkish citizenship for Syrians. But Zamriq says that he hasn't even been able to register as a refugee. At his last appointment at the office for foreigners in Istanbul in August, he was told that Syrians are categorically no longer being given papers. Two friends of his, he says, were recently deported back to Syria -- together with two dozen other refugees.

UNHCR's European head, Vincent Cochetel, has said that even the few Syrians who voluntarily returned to Turkey from Greece have so far not received any titles of protection, despite the fact that Turkey had agreed to do so as part of the deal. The refugees are housed in camps to which UNHCR representatives haven't had access since the coup attempt. That situation in turn supports the decision of the Greek authorities not to view Turkey as a safe third-country. The Center for Political Beauty, an artist collective that wanted to fly refugees from Turkey to Germany, has now filed a lawsuit in Berlin against the EU-Turkey deal.

Ziad Zamriq walks through the neighborhood surrounding Izmir's train station, past clothing stores in which life vests are on display. He has an appointment with a smuggler, a middle-aged Syrian who introduces himself as Abu Ali. Before April, he says, he smuggled people to Greece for 700 euros per person. Since the EU-Turkey deal, fewer refugees have dared to make the journey and he has dropped his prices by half. Abu Ali is hoping that business will pick up again soon, though. Since July 15, inspections carried out by the Turkish coast guard have become less frequent.

The hunt for supporters of the coup has partly paralyzed Turkey's state apparatus. Erdogan has suspended several thousand police and military officials. At the same time, the war against the PKK, the Kurdish terror group, and the military operation in Syria are tying up troops. "At the moment we have more pressing concerns than policing our borders," an official says.

And so a storm is brewing. The neglected inspections, the economic pressure on the refugees in Turkey, the powerlessness of the Greek authorities and the overfilled refugee camps -- this all together is increasing the pressure on the refugee deal. President Erdogan is also threatening to scuttle the deal over the issue of visa-requirements for Turks.

Political advisor Knaus, whom many people describe as the creator of the refugee deal, warns that if the deal fails, chaos could result. Hundreds of thousands of refugees, he says, would arrive in Greece and try to break through the fences to the north. The Balkans would turn into a battleground for migrants, smugglers, border guards and soldiers, Knaus says. "That would be the end of European asylum policy."