It was an astonishing address, one that was altogether unpresidential. German President Joachim Gauck stood in the entrance hall of his official headquarters at Bellevue Palace in Berlin and gave the Russian government a full dressing down. The talk shifted from a "deficit of the rule of law" to an "air of imperialism" to the obstruction of criticism in the media. They were admonitions that would hardly be appreciated at the Kremlin.

For a while now, Gauck has been searching for a theme for his presidency. Now he seems to have found one: the commitment to human rights. Seldom before has a German head of state directed such critical words at the Russian government.

It's news to no one that the relationship between Berlin and Moscow is not at its best. This week, German Chancellor Angela Merkel is set to meet twice with Russian President Vladimir Putin -- once on Monday at the G8 summit in Northern Ireland and a second time on Friday at the International Economic Forum in St. Petersburg. The mood is sure to be frosty: Putin has long been annoyed by Merkel's eternal admonitions.

But with Gauck's intrusion, the ice age between Berlin and Moscow is reaching a new level of deep chill. Among the general German public the words of the president, uttered two weeks ago at a conference with Russian intellectuals in Berlin, have passed largely unnoticed. But at the Kremlin the popular German president's comments were registered attentively. They weren't the usual clichés about German-Russian understanding. His language was quite clear.

Above all, the Russians took note of a particular passage. The president urged Russians to feel a sense of shame, sadness and regret when dealing with the history of the Communist dictators. Gauck, who served as commissioner for the Stasi archives from 1990-2000, said that Russia should take an example from Germany when it comes to reckoning with its past. Is a German president allowed to dole out such lessons? He broke a taboo.

A Cooling of Relations

In recent months the dispute in Germany over the country's policy when it comes to Russia has intensified. On one side are powerful and financially strong associations such as the German Committee on Eastern European Economic Relations (OA), but also top politicians in the Social Democratic Party (SPD), like Merkel's challenger for the Chancellery, Peer Steinbrück, and the party's parliamentary floor leader Frank-Walter Steinmeier. They ask for understanding of Russia's historically conditioned set of problems. An open confrontation with Russia, they argue, doesn't help the country and could be detrimental to German interests.

On the other side are politicians like Andreas Schockenhoff, deputy parliamentary floor leader of Chancellor Angela Merkel's conservative Christian Democratic Union (CDU), and Green Party parliamentarian Marieluise Beck, who warn that Germany shouldn't knuckle under to Moscow out of fear of potential economic consequences. They have felt confirmed in these views ever since Putin openly demarcated Russia from the West by criminalizing representatives of German NGOs as "foreign agents."

Unlike her predecessor Gerhard Schröder, Chancellor Merkel never put herself on the side of the friends of the Kremlin. Nevertheless, she initially harbored hopes of encouraging a change in Russia through the expansion of the two countries' economic relations. This hope has not been fulfilled, say sources at the Chancellery. No one seems to know what a new Russia policy might look like.

The president's disparaging remarks come precisely in this fragile phase. Gauck wants to make it a major concern of his presidency to openly address civil rights violations. He did it in Columbia and Ethiopia, and he will do it in Moscow, should a state visit come about. "I wouldn't be able to live with myself if I didn't speak openly about human rights violations," says Gauck.

Attendees of Putin's inaugural visit to Bellevue Palace a year ago described the meeting as "very sober" and "rather cool." Gauck addressed the subject of freedom of opinion and said he would also like to meet representatives of civil society during his visit to Moscow.

The Russian delegation registered with displeasure that the former East German pastor spiced his remarks twice with English phrases. Not once did Gauck utter a word in Russian, although he studied the language in school. "And of course he spoke English with an American accent," said a member of the Russian delegation.

The Year of Germany in Russia was set to begin in Moscow in the summer of 2012, but the planned joint opening never got off the ground. President Putin suddenly had official business that could not be postponed. Officials from the two countries are now trying to reschedule the event -- still to no avail. A meeting during the second half of this year that had already been planned was canceled by the Kremlin. Now they are trying to pinpoint a date in 2014.

It's still unknown whether anything will come of the plans. From the Russians' perspective, Gauck doesn't pass up any opportunity to provoke Putin. In a SPIEGEL interview in October, he praised a German parliamentary resolution that was critical of Russia. Now the office of the president is planning a meeting with representatives of Russian civil society in Berlin. Critics of Putin are also invited.

The wing of the parliament that is critical of the Kremlin approves of the German president's actions. Earlier in the year, CDU parliamentarian Schockenhoff organized a conference at the Foreign Ministry which was attended by hundreds of Russian NGOs. Ernst-Jörg von Studnitz, a former German ambassador to Moscow and president of the German-Russian Forum, declined to take part in the conference. He had the feeling that he wouldn't be granted time to speak.

'We Will Not Listen to Merkel'

At the instigation of the Chancellery, Schockenhoff replaced Studnitz as the German coordinator for the civil society working group of the Petersburg Dialogue. This personnel change met with irritation on the part of the Russians. Last week, when Russian Ambassador to Germany Vladimir Grinin hosted a celebration to mark Russia's national holiday, the commissioner for German-Russian coordination was not on the guest list.

The fate of the Petersburg Dialogue also attests to the current chill in German-Russian relations. This annual event, originally designed as a discussion forum that would serve as a civil-society counterpart to government talks, has been reduced to a shadow of what it once was. Discussions are superficial and important subjects are avoided.

The renowned Körber Foundation, which supported the Dialogue since its inception in 2001, regretfully announced the end of the collaboration in late 2012. According to foundation deputy head Klaus Wehmeier, its aim was to galvanize a critical public in Russia and to boost Russia's civil society. "But in the 11 years of its existence, the Petersburg Dialogue has not moved in a direction that we wish to support," he said.

The next conflict in German-Russian relations is already looming. Foreign Minister Guido Westerwelle has been urging the EU to approve visa-free travel for Russian officials, but opposition to the plan is mounting in Germany.

"Allowing the very people currently preying on the country free travel would send a wrong signal," says Schockenhoff. Meanwhile, Gernot Erler, an SPD lawmaker in parliament who specializes in foreign affairs, has warned against reneging on the agreement, on the grounds that Germany risks losing face.

While Kremlin critics are gaining the upper hand in Germany, hostility to Germany is impossible to overlook amongst Moscow's power elite.

"For a long time, our ties with Germany were warm and heartfelt," says Mikhail Leontyev, a TV pundit who is loyal to Putin. "But right now they have sunk to the most basic level, economic relations."

German-bashing has become fashionable among Russia's pro-Kremlin media. The reputable Moscow weekly Export recently published an article on Westerwelle's failure to take a position on key issues of international policy -- such as where Germany stands on Russia.

"We are heading toward a profound clash of values," wrote Aleksey Pushkov, chairman of the State Duma's International Affairs Committee, after Chancellor Merkel publically criticized a new anti-gay law. "We will not listen to Merkel."

The same goes for President Putin. He has known Merkel long enough to be aware that she has little time for macho posturing. And he couldn't care less. At the EU-Russian summit in Yekaterinburg in early June, the Kremlin leader brought up the recent horsemeat scandal that sent shockwaves through Germany and other European countries earlier this year. Putin said he could only recommend eating horsemeat. "It works better than Viagra," he quipped. 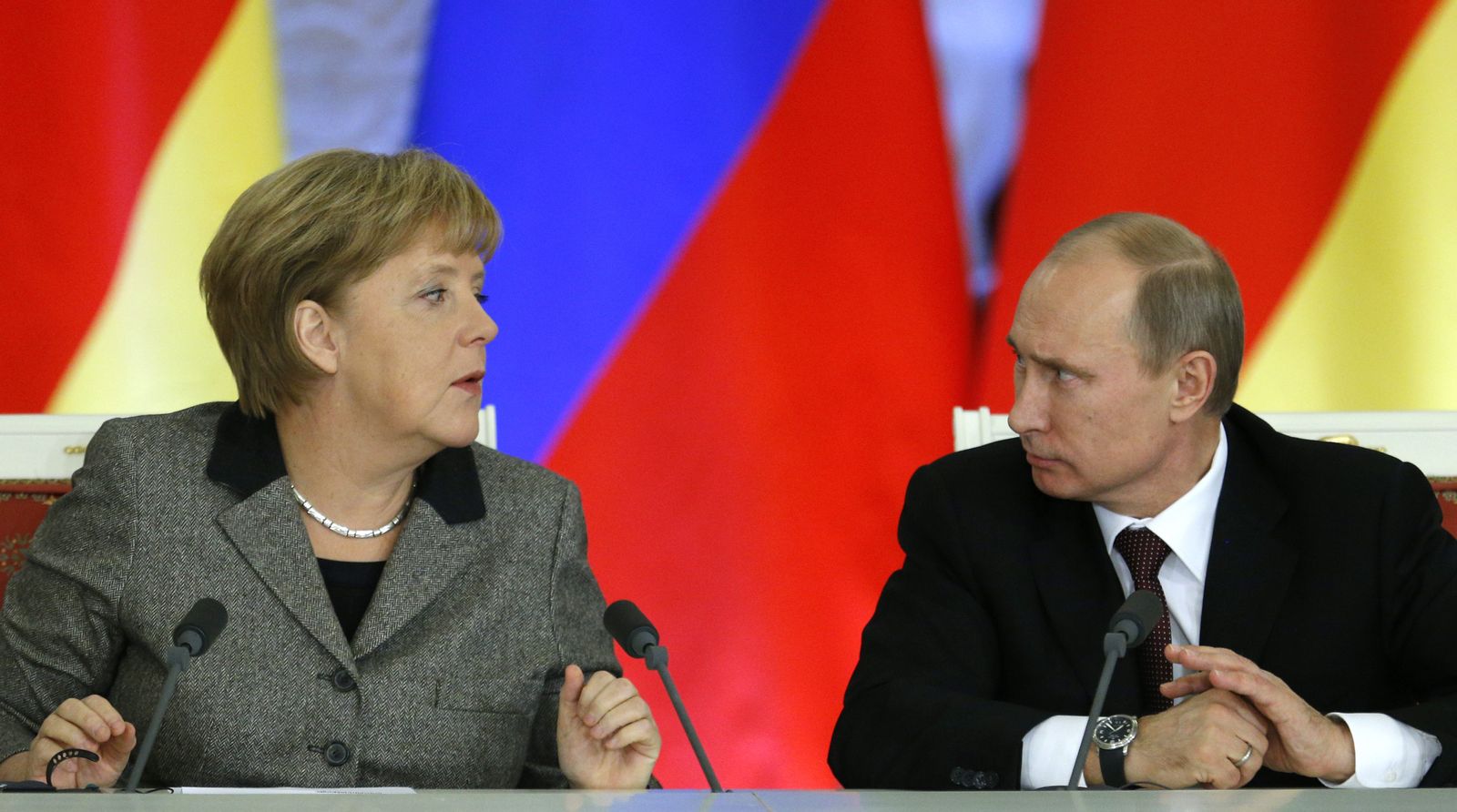 Two meetings this week between German Chancellor Merkel and Russian President Putin are expected to be frosty.