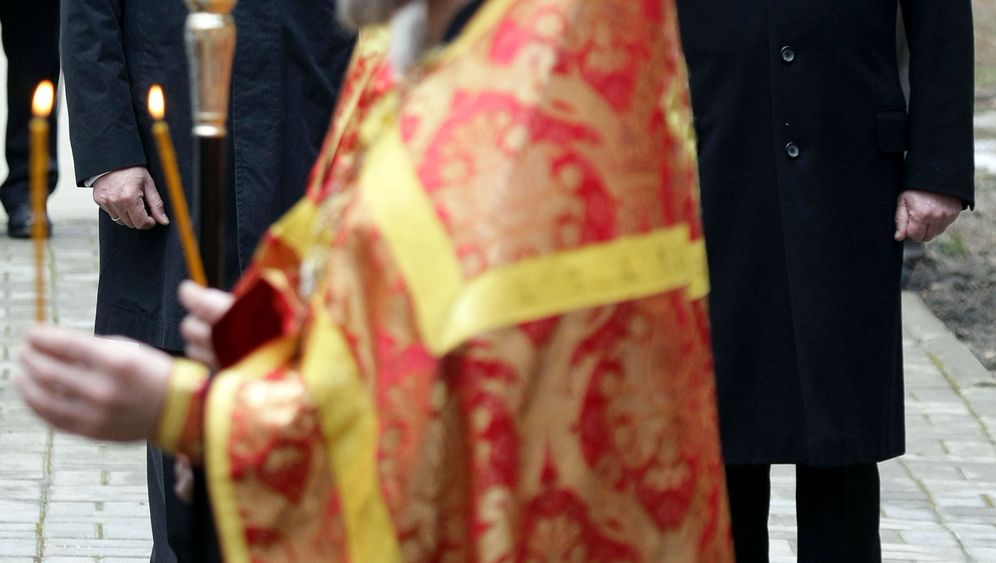 The snow had not thawed completely under the pine trees in the western Russian forest of Katyn as Russian and Polish leaders came together Wednesday to remember the Katyn massacre of 1940. Earlier, a Russian military band had played in the woods, located 20 kilometers (12 miles) from the city of Smolensk, but now it was completely silent. The mossy forest floor swallowed up every sound.

Russian Prime Minister Vladimir Putin bowed his head in honor of the thousands of Polish officers who were murdered in Katyn. Then he dropped to the ground for a moment and knelt over the graves of the dead.

In April and May 1940, Stalin's henchmen executed a total of more than 20,000 Poles at various sites, including Katyn forest, Tver, Kharkov and elsewhere in the Soviet Union. Some 4,000 Polish officers, priests, officials and other "counterrevolutionary elements" were murdered by the Soviets in Katyn alone, killed by targeted shots to the neck.

The execution order, drawn up by intelligence chief Lavrenty Beria, was signed by the Soviet dictator Josef Stalin. The Soviet secret police, the NKVD, was in charge of the massacres. Putin's early career was with the KGB, the successor to the NKVD. In the late 1990s he was also head of the FSB, which emerged out of the KGB after the collapse of the Soviet Union. His background with Russia's intelligence agencies is one of several reasons why Putin's genuflection is an historic gesture that could open up a new chapter in Russian-Polish relations.

"It is the first time that a Russian prime minister has commemorated the victims of Katyn," Russian historian Natalia Lebedeva told SPIEGEL ONLINE. Lebedeva, who is 71, has devoted her entire life's work to the struggle for the recognition of Soviet atrocities against the Poles.

The Russian prime minister, who visited Katyn on Wednesday together with his Polish counterpart Donald Tusk, avoided apologizing on behalf of his country for the wrongs committed against the Poles. He was also careful to emphasize that "Soviet citizens" who were also victims of Stalin's purge are buried in Katyn next to Poles, as are Red Army soldiers who were murdered by Hitler's troops.

"Nevertheless, Putin showed that the issue of Katyn has an entirely new significance for the Russian leadership," said Lebedeva.

Putin, who has in the past been criticized for his view that the collapse of the Soviet Union was "the greatest geopolitical catastrophe" of the 20th century, condemned "inhuman totalitarianism" during his speech in Katyn. Referring to the Katyn massacre, he said that "this crime cannot be justified in any way." Putin also condemned Stalin's claims that the missing officers had "fled to Manchuria" as "cynical lies."

With his speech Wednesday, Putin took another step in a new direction in relation to Poland and the two countries' shared history. Already in September 2009, he had condemned the Nazi-Soviet pact that led to the 1939 partition of Poland in an open letter to the Poles.

Then, last week, Russian state television broadcasted the film "Katyn" by Polish director Andrzej Wajda, whose father was murdered by the Soviets in 1940. Nikolai Svanidze, a historian who has written a biography of Russian President Dmitry Medvedev, praised the "incredibly strong" film. Polish newspapers even welcomed the broadcast as a sign of a "turnaround" in Polish-Soviet relations.

In fact, the film was only shown on the niche channel "Kultura," which specializes in cultural programming, and had to compete with the Oscar-winning "The Hurt Locker," which was being broadcast at the same time.

Nevertheless, Russia is making clear efforts to try to ease the tense relationship with its neighbor. A series of issues have contributed to tensions between Warsaw and Moscow in recent years.

Russia regarded Poland's willingness to host parts of a planned US missile defense system on its own territory as a hostile act and even warned of military retaliation. The tensions culminated in an ironic request by Polish Foreign Minister Radoslaw Sikorski, who asked Russia to limit its threats of a nuclear strike to one every quarter year.

Putin did not get on very well with former Polish Prime Minister Jaroslaw Kaczynski. It appears, however, that Putin has found a common language with Kaczynski's successor, Donald Tusk, who took office in November 2007. Putin and Tusk even shook hands over the graves of Katyn during Wednesday's ceremony.

The gesture could even be helpful for the rest of Europe. In the past, Polish-Russian tensions repeatedly put strains on the EU's relations with Russia, as in the case of negotiations over a new EU-Russia partnership agreement, which the Poles repeatedly torpedoed.

The dead of Katyn would also hope that the leaderships of the two countries would find a way to reconciliation, Tusk said at the Katyn memorial. Many relatives of the Polish victims, who had traveled with Tusk's delegation to Katyn, were probably hoping for a clear apology from Putin. But the Russian prime minister also needs to take Russian sensitivities into account. A majority of Russians are opposed to an apology for the massacre. In one survey, 54 percent of respondents also said that they knew nothing about the massacre of Poles.

Arseny Roginsky, head of the Russian human rights organization Memorial, which focuses on the Stalin-era terror, described Putin's words as "encouraging." "We did not hear everything that we would have liked to hear from Putin," Roginsky told SPIEGEL ONLINE. "But what he said is a step forward."