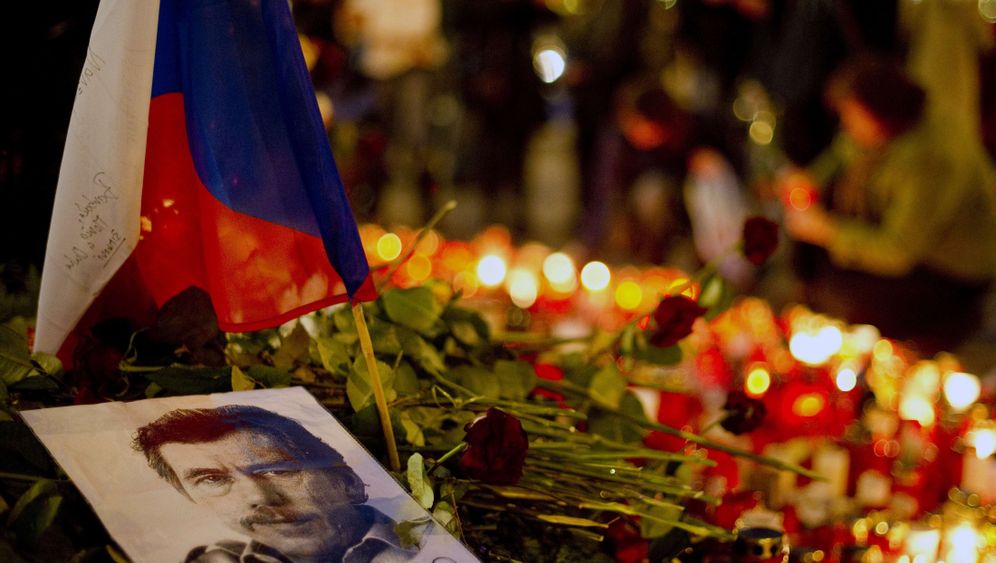 A look at his friends is enough to show that Vaclav Havel was not your typical politician. A man who discusses God and the world with playwright Tom Stoppard and the Dalai Lama and can talk shop with cult musicians like Frank Zappa and rock idol Mick Jagger is anything but a run-of-the-mill career politician straight out of the political machine, someone who thinks merely in terms of power constellations and coalitions.

Havel's image of res publica was probably closest to Plato's concept of the philosopher-king. After all, as a writer, moralist and his country's president, Havel was precisely that. However, the Greek idea of the perfect state assumed that all citizens had the same understanding of what is good -- and it left no place for dissidents.

And herein lies the root of the minor dilemma this great man found himself in: Havel was never easily pigeonholed. Perhaps this explains why he had such a pleasant and yet thoroughly difficult character. Havel was a creature of light who dazzled many, especially those who didn't even cast a shadow themselves. 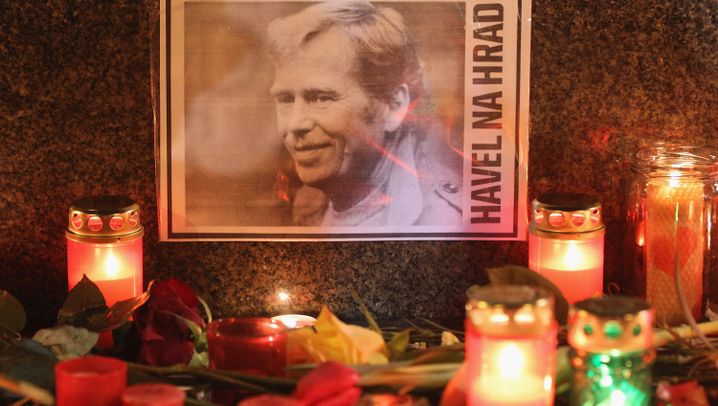 I recall visiting Vaclav Havel at his humble vacation home in the village of Vlčice, in eastern Bohemia, in July 1989. His mustache was an icy gray, his ruggedly masculine Belmondo-esque face was folded by wrinkles, and his hand trembled, forever holding a cigarette. I wondered whether he had just spent another night in a cell for one of those 12-hour interrogations that the authorities picked him up for with alarming regularity.

No, he replied. He had been up until the early hours talking with his friends from Solidarnosc, the Polish trade union. "The Poles are further along than we are," he grumbled, hungover but wide awake. An envelope lying on the kitchen table amid vodka bottles was labeled "To be given to Z. if I'm locked up again." The envelope contained a rough draft of the speech Havel planned to give in Frankfurt, where he was to be presented with the Peace Prize of the German Publishers and Booksellers Association. As he rightly suspected, the regime of then-Czechoslovakian President Gustav Husak would refuse to let him out of the country to attend the award ceremony.

Five months later, on Dec. 29, 1989, the "Velvet Revolution" had swept the communists from power in Czechoslovakia, and Havel, the leader of the dissident Civic Forum, found himself on a balcony overlooking Wenceslas Square in Prague, having been named head of state by the newly elected parliament. And the entire nation was celebrating. The poet-president drew red hearts on hundreds of outstretched hands. Later, he pedaled impetuously through the corridors of Prague Castle, the venerable seat of government, on a child's scooter.

The Path to Dissident Writer

In contrast to many other Eastern European dissidents, the man who helped bury communism in Czechoslovakia never flirted with the powerbrokers of the former regime, partly because of his upper middle-class background. Havel's bourgeois upbringing was both a burden and a privilege. It shaped his development significantly, honing his senses and judgment.

Vaclav Havel was born in 1936, the son of a wealthy architect and landowner. His uncle was one of the most important producers of Czech movies. In 1948, when the communists confiscated the family's property, those carefree days were over. To make ends meet, his father had to get a job as an office assistant, and his mother worked as a tour guide. Barred from entering higher education, Vaclav began an apprenticeship in a chemistry lab, but he also secretly attended evening classes, where he attained his high school diploma and was able to enroll in a transport engineering program at the Czech Technical University in Prague, for which only one place was available. His application to study at the Academy of Musical Arts was turned down because of his alleged political untrustworthiness. Havel was also a passionate theatergoer, so he worked as a stage-lighter and scene-shifter and began a correspondence course in directing. 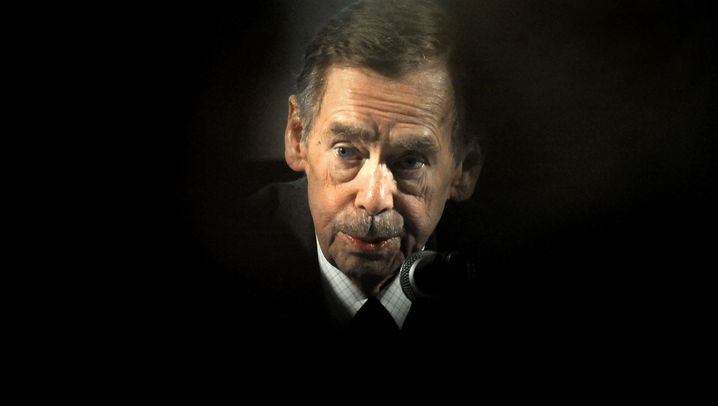 Havel started writing in his spare time. Inspired by Romanian-French playwright Eugene Ionesco, and especially by the surreal reality of the socialist system around him, Havel penned satirical comedies such as "The Garden Party," which earned him acclaim abroad and ostracism at home. Havel also became famous for his essays in defense of the individual in the face of totalitarianism, and he eventually joined the editorial board of Tvár (The Face), a cultural political monthly. A speech he gave against censorship at a writer's conference in 1967 played a significant role in paving the way for the Prague Spring a year later. But when Soviet tanks brutally suppressed the reform movement, Havel was banned from publishing his work.

Bringing Down the Regime

Vaclav Havel spent a total of 50 months in prison. During his incarceration in a cold, damp cell, he wrote his moving "Letters to Olga," the fellow student who became his first wife in 1964 (after her death in 1996, he married actress Dagmar Veskrnova).

When the civil-rights activist wasn't in prison, secret policemen monitored his movements around the clock, even while he worked in a brewery. Sometimes he took pity on his minders, provocatively inviting them to join him for a drink at a local bar. When it was foggy and he was annoyed at being followed in his car, he would try to lose his pursuers with daring maneuvers on country roads. Havel drew on these bizarre situations, writing absurd plays and clever mental experiments as well as various other takes on the theme of finding oneself within a depressing police state.

Charter 77, a civic initiative he co-founded, catapulted Havel to the forefront of the civil rights movement. A relentless opponent of both moral cowardice and the form of extreme passivity the Czechs call "svejkism" (a term derived from the classic World War I Czech novel "The Good Soldier Svejk"), Havel repeatedly tried to convince his friends in the West that "freedom" meant nothing unless it was imbued with life. And he pitied those who avoided him out of fear that "the inevitable nature of our contact" would irritate the government in Prague unnecessarily and therefore "threaten the fragile foundations of a budding easing of tension." After all, he argued, "It was they, not I, who voluntarily sacrificed their freedom."

Havel was never a committed Catholic, but he always had ties to people with firm religious beliefs, people like Vaclav Maly, a dissident priest and fellow Charter 77 signatory. Harassment by President Gustav Husak's Communist Party fused Havel and Maly together, lending them a resolve Havel would later call "a direction, a purpose," a sense that good could come of bad.

In 1989, Maly was one of the organizers of the rallies that eventually toppled the communist regime, and he would later stand alongside his friend on the balcony overlooking Wenceslas Square.

The Tribulations of the Poet-President

Havel made phenomenal achievements in his first years in office. He negotiated the withdrawal of Soviet troops with Russian President Mikhail Gorbachev, gained rapturous applause for his pro-European views in the European Parliament, signed a peace treaty with Germany and apologized for what he termed the "morally reprehensible" expulsion of ethnic Germans from the Sudetenland after World War II -- a generous gesture that wasn't exactly popular in his native country.

But even the poet-president was not immune from setbacks in everyday political matters. He made mistakes precisely because he focused too little on the details. A series of errors suggested he was growing tired and felt trapped by his position, blunders including an amateurish comment about the constitutional system of communist Czechoslovakia and the fact that the otherwise modest Havel signed into law (albeit reluctantly) an amendment outlawing "slandering the head of state." Over time, the schizoid nature of the twin roles of president and artist, political realist and moralist, became painfully clear.

Although he was unable to prevent the breakup of Czechoslovakia, Havel remained the president of the Czech Republic for another 10 years, even leading his former Warsaw Pact country into NATO. But his decision-making powers were gradually eroded, and, as he complained in an interview with SPIEGEL in 1999, it became "difficult to live within the truth when nearly everyone else has settled into their house of lies."

Havel also shared a heartfelt animosity with Vaclav Klaus, his successor in Prague Castle. A diehard admirer of former British Prime Minister Margaret Thatcher, Klaus derided Havel as an unworldly "clown," even though Havel had been farsighted in his condemnation of what he called "mafia capitalism."

Havel left the political stage in 2003, a chastened rather than bitter president. "They turned me into a mythical creature," he said, "and people enjoy shattering myths." After his departure, Havel's unquestionable moral authority continued to secure him much attention, even though he was seen as more of a prophet abroad than back at home.

At our last meeting, a year ago, the clearly gaunt former president told me that "the Angel of Death has crept around (his) bed" time and time again. And, time and again, he was able to chase it away.

In early December, Havel wanted to see the Dalai Lama one last time. But it was a meeting that wasn't to be. Vaclav Havel died in his sleep last Sunday at the age of 75, a political and moral giant in an era of pygmies.