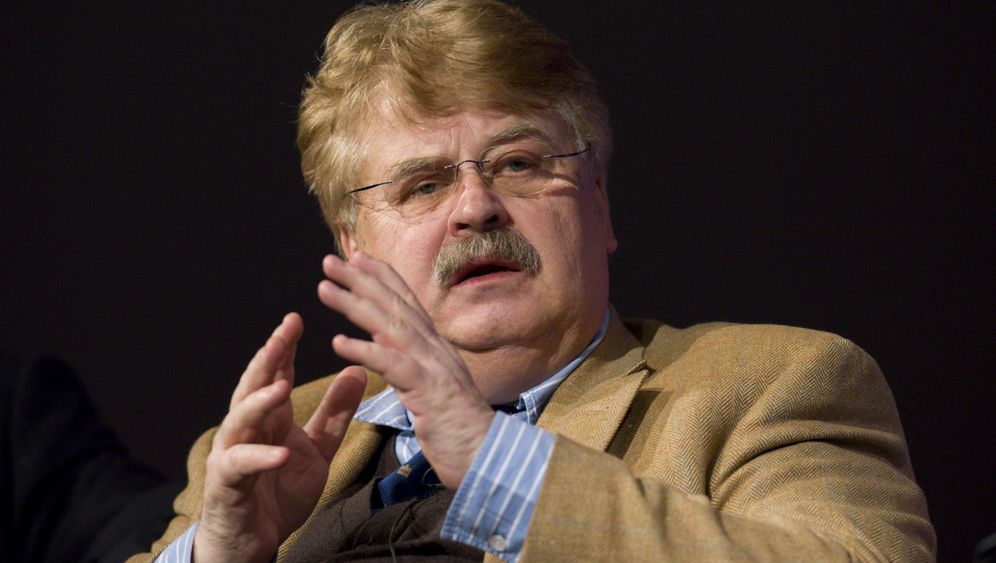 Catherine Ashton likes to deal personally with the important matters affecting the European External Action Service (EEAS). Recently Ashton, the European Union's high representative for foreign affairs and security policy, took the elevator to the ground floor of her agency's Brussels headquarters and marched into the building's inner courtyard.

A pavilion there allows smokers to stay dry even on rainy days. On this particular one, though, it wasn't raining in Brussels for once, and a few EU employees stood smoking outside the structure. They were more than a little surprised when Ashton appeared in front of them and asked that they please step inside the pavilion, because otherwise their cigarette smoke would waft into the offices on the building's upper floors.

This was one of the rare moments when the diplomats of the European External Action Service (EEAS) laid eyes on their boss in person. Ashton is usually so busy that even her spokesperson, when asked about the high representative's whereabouts, once answered, "We don't know, but she's definitely working."

When Ashton, a member of Britain's Labour Party, took office three and a half years ago, the idea was for her to lend weight to EU foreign policy. Instead, the EU finds itself still struggling to gain diplomatic influence. Employees within Ashton's own agency complain that the high representative is unable to delegate and has no political agenda.

The European Parliament's Foreign Affairs Committee, which oversees the newly created EEAS, has similar criticism for the way the agency is run. On Tuesday, committee chair Elmar Brok presented a paper that describes a structure that is "too top-heavy and marked by too many decision-making layers." The paper adds that Ashton often reacts too late and allows EU member states to dictate her staffing policy. The report suggests a general review of the agency, with Ashton receiving one or more deputy representatives to assist her.

There is considerable dissatisfaction with the EEAS within the European Parliament. According to the Lisbon Treaty, the EU's new diplomatic service should work to formulate a common EU foreign policy, yet not even the high representative believes this is actually possible. "The EEAS is not a European foreign ministry designed to replace Member States' foreign ministries," Ashton wrote in an internal position paper, but rather "something new and unique."

It's certainly under uniquely poor management, or so the parliamentary report suggests, with its long list of the agency's shortcomings. Wherever crises have cropped up over the past two years, the EU has reacted too late. When the Arab Spring broke out, Ashton had to be asked several times before she finally flew to Cairo. Even with an ongoing crisis brewing in Mali, it was France that ultimately intervened to keep the country from falling completely to Islamic fundamentalists.

"Operational decision-making and implementation in the area of the Common Foreign and Security Policy / Common Security and Defense Policy (CFSP/CSDP) are too slow because of structural and procedural reasons," criticizes the parliamentary report. It goes on to state, "It has become apparent that the EU is unable to ensure, in the short term, a reallocation of resources, including staff, to match new political priorities."

The European Parliament also finds fault with the fact that key areas of foreign policy -- such as climate change, trade and energy policy -- are out of Ashton's hands, limitations that the high representative accepts without complaint. Since she's simultaneously vice president of the European Commission, Ashton could certainly take a stance on any and all issues, yet she has not made any memorable statements even on the all-consuming matter of the euro-zone debt crisis. When her staff reminds her that China and Japan are highly interested to know how stable Europe's currency is, the high representative replies that the subject is not her area. The one point on which all parties can agree is the high representative's talent as a negotiator -- Serbia and Kosovo have Ashton to thank for an agreement reached last Friday to normalize relations between the two countries.

The EU Versus the Baroness

The EU member states don't make things easy for the British baroness. The larger countries in particular prefer to reach their decisions unilaterally. The individual member states also intervene in EEAS staffing decisions whenever they can, preferring to send their own representatives when it comes to posting EU ambassadors to other countries. Forty percent of these positions went to candidates from the member states, much to the displeasure of long-serving Brussels-based diplomats, some of whom describe it as a "hostile takeover."

Ashton has raised no objections on the matter, and to make things worse, some of the new EU representatives quickly turned out to be a poor fit for their posts. In Libya, a second ambassador resigned after just a few months, unable to cope with the job. Yet Ashton herself had declared, in announcing that ambassador's appointment, "The opportunity to represent the EU in the world clearly continues to attract the very best diplomats."

Inge Grässle, a member of the European Parliament's budgetary control committee, also criticizes the fact that no other EU institution has so many high-level officials overseeing so little staff, pointing out that there are directorates with just 22 employees and director-generals who oversee as few as 44 staff members.

No less questionable is the increasing number of so-called special representatives. When she first took office, Ashton intended to disband these posts, which come with generous travel budgets. Instead she has appointed more special representatives than ever before. At the same time, the exact responsibilities that fall to these positions are unclear. Grässle believes their primary purpose is "aimless foreign policy action."

One Foot out the Door?

Ashton comes across as clearly weary of her position, and recently announced she will step down in 2014. She knows she has no chance of a second term. Ashton arrived in Brussels in 2009 on behalf of Great Britain's Labour Party, but current Prime Minister David Cameron heads the Conservative Party and is hardly going to support a candidate from his opposition.

In other words, the race to see who will succeed Ashton has begun. A great deal here depends on the results of the European Parliament elections in May 2014 and on who gets Brussels' two other top jobs -- the European Commission president, who runs the EU's executive, and the European Council president, the head of the powerful body that represents the leaders of the member states. Still, two candidates -- Polish Foreign Minister Radoslaw Sikorski and his Swedish counterpart Carl Bildt, both of whom have many years of foreign policy experience -- are already warming up for the race. The two politicians are known to have no shortage of self-confidence and, unlike Ashton, are unlikely to be content with simply compiling the opinions of the member states' foreign ministers.

Even Ashton has come to concede her weaknesses. At a recent conference of the German Marshall Fun in Brussels, the top diplomat said she had laid the foundations for the EEAS, but it was time for someone else to take over. "There are people who can do things with this that probably I couldn't do, so it'll be good to hand it over," she explained.