Is a bailout by any other name still a bailout? The Irish government may have finally admitted that it requires help with its ailing banking sector but ministers are continuing to deny that the arrival of international financial experts to Dublin this week heralded any loss of national sovereignty. The mood in the country is now one of disbelief that Ireland, once the famed Celtic Tiger economic powerhouse, could have sunk so low, so quickly. And that it could be on the cusp of handing over some control of its governance to outsiders.

On Friday, members of the troika from the International Monetary Fund, the European Union and the European Central Bank, who held an initial round of talks on Thursday, began poring over the books to get a sense of just what kind of assistance Ireland requires. The question now seems to be if a contingency fund for its banking sector will suffice or if the Irish state will have to apply for support from the European Financial Stability Facility, the fund financed by the EU and the IMF, which was created in response to the Greek debt crisis. Also at stake is whether Ireland will have to cede its low corporate tax rate, something that has long irked its European partners, before it can obtain any aid.

After a week of denials by government figures, by Thursday night Irish Finance Minister Brian Lenihan was admitting that the Irish government was no longer in a position to deal with the massive debts incurred by the country's financial institutions that seemed to be sucking the rest of Ireland's finances into a black hole.

Speaking to public broadcaster RTE on Thursday night, Lenihan said that the "big difficulty of course is that the banks grew to such a size that they became too unmanageable for the state itself, that's the big difficulty here." The Irish government in 2008 guaranteed all debts and deposits in Irish banks, since then three banks have been nationalized and the state has taken a major stake in others. With the state so inextricably linked to the banking system it may now be difficult to present any aid to the Irish banks as not being a de facto bailout for Ireland.

It is still not certain what any potential aid package would look like. Irish Community Minister Pat Carey said on Friday it would be impossible to come up with a figure until the joint mission had come to grips with the state of the banks.

"Until such a time as the IMF and others have examined how critical the situation in the banks is, I think it would be impossible to say how much would be required," he told the Newstalk radio station.

The government has said the discussions should run into next week and Lenihan told the Dáil, the Irish lower house of parliament, on Thursday that Dublin was not yet at the point of requesting a loan. He said the talks were about "substantial contingency capital to be made available to back Ireland."

Losses at five Irish banks have required a €45 billion ($62 billion) bailout from the government at a time when tax revenues are significantly down to due the recession. The bank bailout has cannibalized the public finances, pushing the public deficit temporarily to 32 percent of GDP for 2010, 10 times that allowed by EU rules. Meanwhile, the Irish banks have been largely shut out of market lending due to concerns about their solvency. The ECB has had to step in to keep them going and its exposure in Ireland is over €130 billion, a quarter of its book.

The Irish Times on Friday reported that the options at the preliminary talks on Thursday night included making AIB, one of the banks struggling the most with the collapse of the real estate bubble, and parts of other banks more attractive to foreign buyers. The paper also learned that the discussions centered on ways to reduce the size and number of Irish banks which are seen as having grown too big and that are now reliant on ECB funding.

Any bailout would be sure to have strings attached, though the government is insisting that it that the IMF and EU would not have any input in Ireland's budgetary measures. The fact that a Brussels official referred to the bailout loan as the "Oliver Cromwell Package" when speaking to the EU Observer website, is unlikely to go down well in Ireland. The British ruler of that name invaded and re-colonized Ireland in the mid 17th century and is still a hated figure in Ireland.

Berlin on Friday sought to play down any concerns that it is putting pressure on Dublin to accept EFSF aid. "The German government greatly supports the Irish government's policies and has great confidence in the courageous reform policies contained in the four-year program it is expected to present in early December," government spokesman Steffen Seibert told reporters. Asked whether Germany wanted Ireland to raise its corporate tax rate, he said this was a matter to be decided by the Irish government.

And the Irish government is insisting that is one red line that will not be crossed. It was the low corporate tax rate, just 12.5 percent, which along with a skilled, young, English-speaking workforce, which attracted key foreign investment during the boom years. Irish Deputy Prime Minister Mary Coughlan said on Thursday that the low rate was "non-negotiable." And speaking on the BBC on Thursday, Europe Minister Dick Roche bemoaned the "unhelpful chatter" about the tax rate. "Where would be the sense of destroying one of the great drivers of growth?" he asked.

Ireland finally realized the writing was on the wall on Thursday morning when Irish Central Bank Governor Patrick Honohan said that a large team of international experts would not be coming to Dublin "if they didn't believe they could agree on a package." Honohan, who is independent of the government, said he expected Ireland would accept a "substantial loan" amounting to "tens of billions."

'You Have Destroyed this Economy'

Prime Minister Brian Cowen dismissed the comments, saying they were premature ahead of the negotiations. However, the fact that Honohan made such a clear statement was welcomed after the series of denials from various government figures since the weekend that talks were being held with Ireland's EU partners over possible aid. The Irish state's hand was forced after the rate of state bond yields were driven up last week due to investor concerns over possible eventual creditor participation in any euro-zone countries' eventual insolvency.

There is widespread public anger in Ireland not only at the government's handling of the crisis but of its blanket denials that it was seeking aid. In a heated exchange on RTE television on Thursday night a leading member of the opposition Labour Party, Pat Rabbitte, berated government minister Pat Carey for ruining the country. "You ought to be ashamed to show your face in this studio after you have brought our country to penury tonight and after the damage you have brought to people's livelihood," he said. "You have destroyed this economy. It's about time you went because you can do no more damage to this country," he said angrily to the minister, a member of the ruling Fianna Fáil party which has been in government for 13 years and is currently in coalition with the tiny Green Party.

It is unlikely that the government, elected in 2007, will survive the full legislative period. A by-election for a vacant seat is being held next Thursday in the northwestern county of Donegal and the Sinn Féin candidate is the front-runner to win the seat. That leaves the coalition with a majority of just two, but there are three more by-elections to be held by the end of next year. The deeply unpopular Brian Cowen is likely to be facing the electorate sooner rather than later. 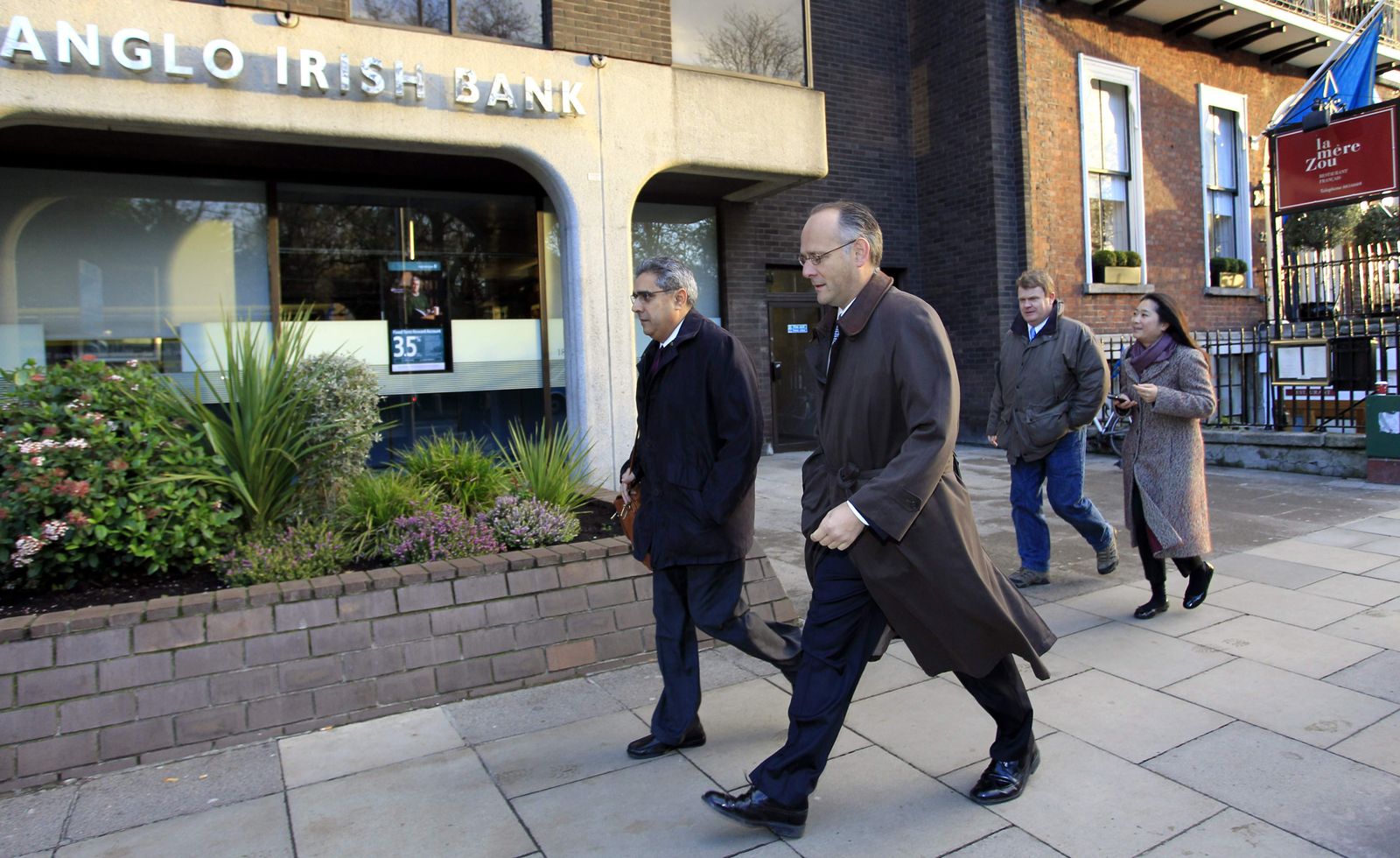 Ajai Chopra, of the IMF, and colleagues pass one of Ireland ailing banks, Anglo Irish, in Dublin on Thursday.