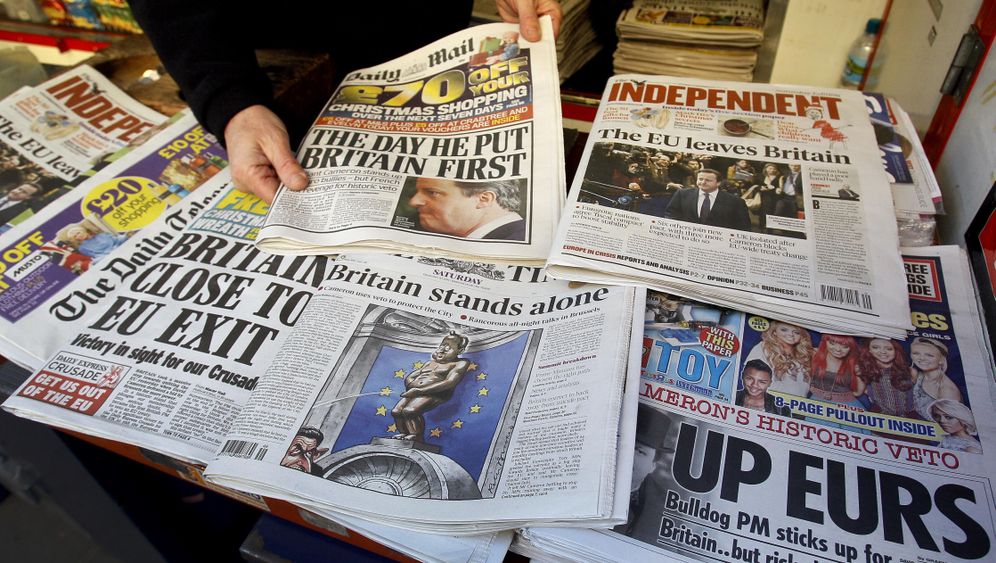 British Prime Minister David Cameron had only been in office for seven weeks when he and German Chancellor Angela Merkel decided to watch a football match together to get to know each other better.

It was on June 27, 2010, and it was the World Cup quarter final in South Africa. It was also a match between two classic rivals: Germany and England. Thomas Müller scored a goal in the 67th minute, bringing the score to 3:1 -- to the consternation of British fans and the delight of the Germans.

In Toronto, where the two leaders were attending the G-20 summit, a beaming Merkel leaned over to Cameron and said, with typical German anti-triumphalism but a lack of linguistic finesse: "I really am terribly sorry."

When the Germans scored another goal three minutes later, Merkel said she was "sorry" again. As Cameron later said, half-jokingly, the shared experience was "a form of punishment I wouldn't wish on anyone." Nevertheless, he added, Mrs. Merkel "is one of the politest people I have ever met."

After that, Merkel and Cameron made a concerted effort to get along with each other. A little more than a year ago, Cameron reached into his bag of tricks once again. He invited the chancellor to Chequers, the magnificent country residence of Britain's prime ministers, where he and Merkel watched her favorite crime series, "Midsomer Murders," which led to another, urgently needed upturn in German-British relations. Merkel had, in fact, never really forgiven Cameron for having led his Conservatives out of the European People's Party, a conservative group in the European Parliament.

For a while, the charming Cameron was far up on Merkel's list of favorite European colleagues -- until, with his lone veto against EU-wide treaties to resolve the debt crisis, he catapulted himself back to the bottom.

The English Channel has suddenly become wider, deeper and foggier once again. The London-based Daily Telegraph newspaper has warned its readers against what it calls Berlin's blatant effort to dominate Europe and already sees "a new era of Anglo-German antagonism" on the horizon -- again characterized by two leaders who are bound together in their sincere dislike for each other, like past leaders of the two countries: Helmut Kohl and Margaret Thatcher, or Gerhard Schröder and Tony Blair. Reverend Peter Mullen, the Anglican chaplain to the London Stock Exchange, where he is not popular for his crude views, goes even further. According to Mullen, Germans tried to achieve hegemony in Europe by military force in 1870, 1914 and 1939, and now Merkel is trying to do the same with the weapons of the financial system.

'Welcome to the Fourth Reich'

Distrust of the European Union goes hand-in-hand with distrust of Germany, especially among "euroskeptics," the current euphemism for the many haters of the EU in Britain. The headline "Welcome to the Fourth Reich" in the high-circulation Daily Mail summarized the German-French plans to rescue the monetary union. In another story, the paper wrote: "What we are witnessing is the economic colonisation of Europe by stealth by the Germans."

Of course, many Britons -- and even some Englishmen, among whom the resentment is the most widespread -- know that such talk is nonsense. But surprisingly many do not. Whenever someone on in Britain utters the word "Germany," it doesn't take long, a matter of milliseconds, in fact -- even in many well-informed circles in politics, journalism or the world of comedy -- before someone says: "Hitler."

It's been this way for decades. Nazis are practically an obsession in Britain, and associating Germans with them is such a strong reflex that it stifles almost all interest in the real Germany of today. The Qualifications and Curriculum Authority, a British education authority, found that the teaching of history suffers from excessive "Hitlerization." For British schoolchildren, Germany came into the world as a freak in 1933 and, thanks to then Prime Minister Winston Churchill, died a well-deserved death in 1945.

The anti-German rhetoric was particularly strong after German reunification, which then Prime Minister Margaret Thatcher, nicknamed "the Iron Lady," sought to prevent. Even the levelheaded Economist warned against what it believed to be the threat of a German nuclear bomb. In 1990, Thatcher invited leading British historians to a conference at Chequers to analyze the dangerous German national character. According to the minutes of the meeting, some of the supposed German character traits discussed there included "aggressiveness, egotism, an inferiority complex and sentimentality."

Some things have changed for the better recently. The football World Cup in Germany had more of an impact on the British view of Germany than 60 years of postwar history. In the summer of 2006, about 100,000 Britons traveled to a country that was largely unknown to them, but no matter where they looked, they could see no goose-stepping policemen in leather coats or German supermen. Instead, they encountered fantastic weather, peaceful fan zones and hedonistic partying Germans who bore no similarity to the "Krauts" described in the British media.

Even the notorious English tabloid press managed to adopt a more conciliatory tone. In the past, the British tabloids would announce German-English matches with headlines like "Achtung! Surrender" (Daily Mirror) or "Let's Blitz Fritz" (Sun). But with the German-hosted 2006 World Cup even the Sun dropped its virulently anti-German tone when it wrote: "England fans love the Germans."

Last year, the journalist Peter Watson came out with a much-noticed work of almost 1,000 pages with the title, provocative in the UK, "The German Genius." Watson was tired of the fact that the view of Germans among his fellow Englishmen began with Hitler and ended, at best, with Göring, Himmler and Rommel, the "Desert Fox." In his tome, Watson also writes about Kant, Goethe, Mozart, Wagner, Nietzsche, Freud, Einstein and Planck, and a wonderful German quality called "Bildung," "education."

In London, exhibitions by German painters like Sigmar Polke or Gerhard Richter (currently at the Tate Modern) attract tens of thousands of viewers. German-style Christmas markets, complete with "Gluewine" (an Anglicized spelling of the German word Glühwein, or mulled wine) and bratwurst, are popping up everywhere. German kitchens, washing machines and, of course, cars are popular, as are the Lidl and Aldi discount supermarket chains. The German economy as a whole, and achievements as the short-time working system known as Kurzarbeit and the dual education system, are widely admired.

For the British, the fact that the Germans, with their renowned engineering prowess, still produce goods and sell them around the world is a wistful reminder of their own days as major exporters during the Victorian age. While today's financial industry may be profitable for the British nation, unlike the now-faltering British industrial sector, it is not suited to generating a sense of national identification or even pride.

The Indians bought Jaguar a few years ago, Rolls-Royce is now part of BMW, Volkswagen owns Bentley, and once-proud brands like Triumph, Austin and Vickers no longer exist. Even the colorful candies known as "Smarties" haven't been produced in York, where they were invented, for the last five years. All European production has now been moved to Germany.

But outside the big cities, especially in conservative areas, there is a growing mood of indifference, if not hostility, toward Germany, as evidenced by the example of Bishop's Stortford, an affluent bedroom community of 35,000 people near London Stansted Airport.

At the end of November, John Wyllie, the Conservative mayor, wrote letters to officials in his town's twin cities, the German town of Friedberg, near Frankfurt, and the French town of Villiers-sur-Marne, near Paris. Without giving any reasons, he terminated the partnership effective Sept. 28, 2012, putting an abrupt end to an unclouded relationship of more than 46 years.

Officials in the German and French twin towns are dumbfounded at the decision taken by their British twin town, whose council has been dominated by Conservatives since a local election in May.

'Some Kind of Monster'

Tories, says Mike Wood, the only local council member from the Europe-friendly Liberal Democrats, are "usually normal people. But whenever you mention Europe they turn into some kind of monster."

So a new ice age has set in for the time being. Many Britons have noticed that "suddenly German is being spoken in Europe," following the undiplomatic words of Volker Kauder, the parliamentary floor leader of Germany's conservative Christian Democratic Union (CDU). They've also noticed that there are Germans who already anticipate " Britain's departure from the EU," as SPD parliamentary leader Frank-Walter Steinmeier said. And Merkel's statement that "no country, no financial center and no financial product can be unsupervised from now on" was certainly understood in London just the way it was meant.

Even before the Brussels summit, politicians in Berlin knew that there would be no compromise with the Tory government in London. When Cameron visited Berlin in mid-November, he told his German counterpart that as much firepower as possible had to be used to combat the euro crisis.

To which the chancellor responded coolly: "One shouldn't pretend to have power that one doesn't actually have."