At least the backdrop to the heated exchange was glamorous. The venue for the mid-December conference, which was hosted by the US Chamber of Commerce, was the Hotel InterContinental in Athens. Poul Thomsen, wearing a purple tie, was standing on the floor of the ballroom. Thomsen, the International Monetary Fund's envoy for Greece, summarized the country's reform efforts to date in harsh terms. "Reforms are running behind schedule in most areas," he said. There was no longer even a pretense of hope. When Thomsen predicted that the economy would shrink in 2012, someone in the room shouted angrily: "Your troika is destroying us!"

Two years after the crisis began, the Greek tragedy is reaching a new climax. The economic data are distressing, the reforms are progressing very slowly, and now negotiations with private lenders on a voluntary writedown of Greek government bonds appear to be on the rocks.

The Greek economy was actually expected to shrink by only 3 percent in 2011. But according to current calculations the contraction was closer to 6 percent. Hopes that the economy will regain strength in 2012 will probably remain unfulfilled. Instead, it will most likely continue its downward slide -- for the fifth year in a row. It is becoming more and more apparent that without general debt relief that includes all groups of creditors, from private banks to the European Central Bank (ECB), Greece will hardly be able to free itself from its predicament.

But the Greek government and the so-called troika, consisting of the European Union, the IMF and the ECB, are determined to stick to their current strategy. IMF envoy Thomsen plans to return to Athens next week, and he is already starting to ramp up the pressure. In light of the country's gloomy economic outlook, the troika wants to revise the benchmark figures for the restructuring program approved in October.

According to an internal document, the troika sees three possibilities: Either the Greeks must impose even tougher austerity measures, or private creditors must accept a larger debt haircut or the country's creditors must provide Greece with additional funds.

The troika document also says that the administration in Athens is falling far short of the agreed reform targets. For example, the troika notes that Greece is not sufficiently complying with its promise to collect more taxes, while the proceeds from the country's privatization program are well below expectations.

Last fall, the IMF and the EU determined that Greece's debt would have to be cut to 120 percent of GDP to be sustainable. The country's debt was to be reduced to this level by 2020, and to a lower level in subsequent years. But now the IMF recognizes that this is probably not possible. In any case, even a debt-to-GDP ratio of 120 percent could still be too high.

In a report released last August, IMF economists concluded that emerging economies could support maximum debt levels of 63 to 78 percent of GDP in the long term. "Now that they are confronted with the reality on a daily basis, the IMF people are realizing that Greece, in structural terms, should really be classified as an emerging economy," says a senior official at Germany's central bank, the Bundesbank.

A study by economist Henning Klodt of the Kiel Institute for the World Economy shows how unrealistic the troika's assumption was. Klodt calculates the amount by which current revenues must exceed expenditures in the Greek budget to get the country's debt under control. He concludes that even if there are significantly lower interest rates combined with very optimistic assumptions about the economy, the surplus would have to amount to more than 10 percent of GDP -- a value that, as Klodt notes, not a single industrialized country has ever achieved in recent decades.

"When the most recent restructuring program was approved, it was already clear that the assumptions were unrealistic," says Oxford-based economist Clemens Fuest, an adviser to the German Finance Ministry. If the numbers are adjusted downward once again, says Fuest, the troika will be being more honest.

But the troika is not as honest as to admit the impossibility of its own mission. Instead, it continues to stall for time and is pinning its hopes on private investors coming around.

Prime Minister Lucas Papademos expects the negotiations with private creditors on debt restructuring to be complete by mid-January. Otherwise, he warns, Greece could face the immediate threat of a disorderly bankruptcy in March, when €17.5 billion ($22 billion) worth of bonds will mature.

But the negotiations between Greece and the financial companies represented by the Institute of International Finance (IIF) are hanging in the balance. Although IIF Managing Director Charles Dallara recently said that progress was being made, he also made it clear that the lenders are not willing to take more than the agreed 50 percent haircut.

Other players are even more pessimistic. "There is not even a common negotiating position on the part of the lenders," says the representative of one participating German bank.

Besides, the investors also have highly diverging interests. For instance, hedge funds have bought up large numbers of bonds, some of which already mature in March. They have no interest in a debt restructuring. Insiders estimate that speculative investors could be holding up to €50 billion in Greek debt. And bankers, like Commerzbank CEO Martin Blessing, feel that a debt restructuring limited to private creditors is fundamentally wrong.

"The IMF is calling for up to 90 percent in debt relief," complains one banker -- a claim that sources in the IMF deny. But if the haircut is so large, there is a risk that, even if the lead negotiators are in agreement, not enough creditors will play along so that the targeted debt ratio of 120 percent can be reached.

Experts are convinced that real financial relief for Greece can only be achieved through a general debt writedown. But then the pretense of a voluntary restructuring could not be maintained. Both Europe's governments and the ECB would have to accept substantial losses, Greece could be forced to withdraw from the euro zone, and speculation against other crisis-stricken countries could escalate.

Nevertheless, even German politicians are slowly realizing that the current strategy is not sustainable. "It is quite possible that we will also have to write off some of the Greeks' debts," says Gerhard Schick, financial policy spokesman for the Green Party in the German parliament. "After all, it doesn't make sense to demand debt repayments that can never be made." 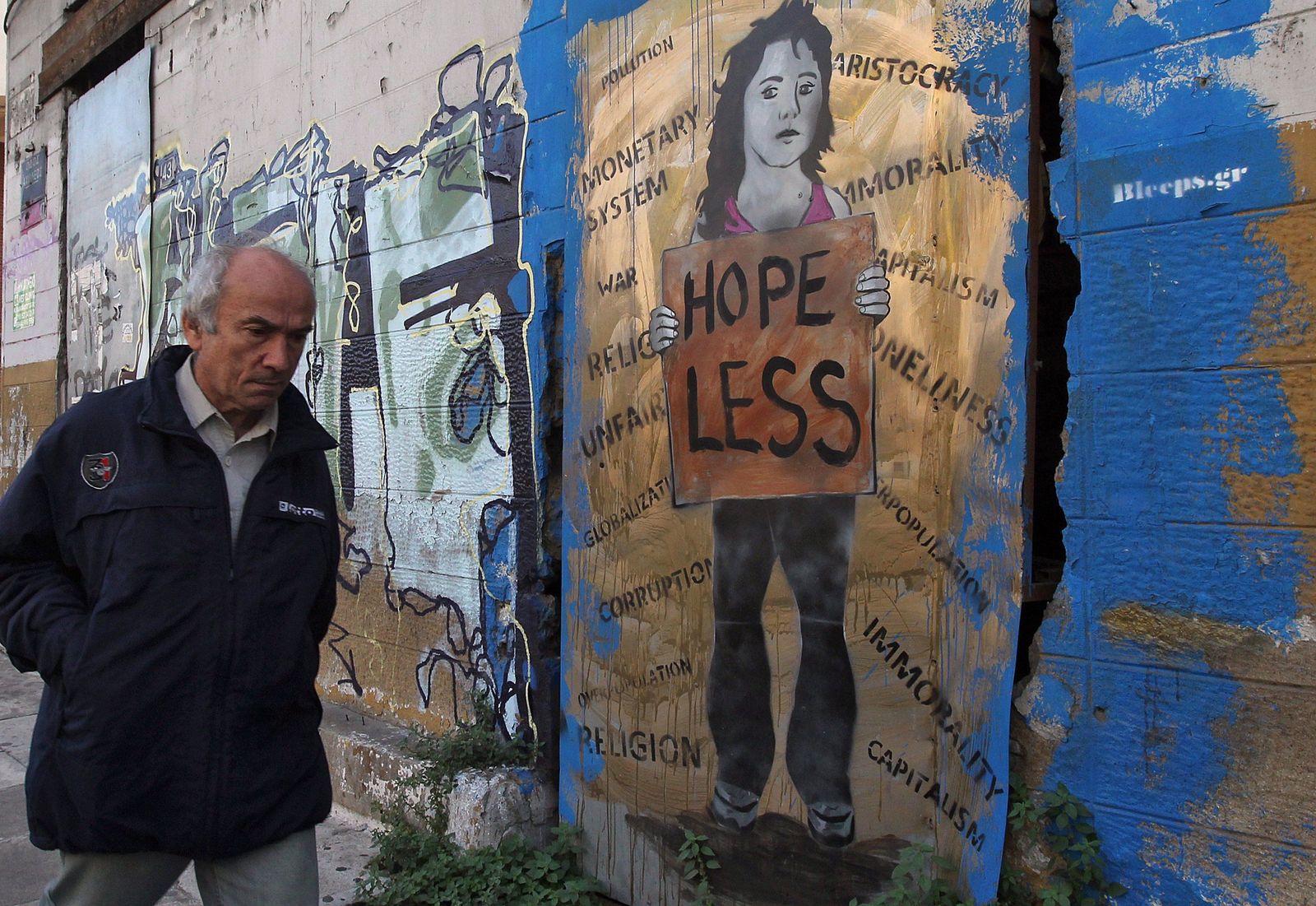 Graffitti in central Athens: Doubts are increasing about whether the country can turn the corner.