In the wake of Saturday's bombings in Stockholm, conservative politicians have said that Germany should tighten its visa policies. Politicians from the Christian Social Union (CSU), the Bavarian sister party to Angela Merkel's Christian Democratic Union, said Tuesday that a database of suspected terrorists should serve as a filter for foreigners seeking German visas anywhere in the world.

But Sebastian Edathy, a member of the center-left Social Democrats, said the nation's visa regime was secure and warned against using the bombings as a way to pass unnecessary laws. "It's a naïve assumption that would-be terrorists will wait patiently in line at a German embassy for a tourist visa," he said.

Bavaria's interior minister, Joachim Herrmann, who belongs to the CSU, said a plan for such a terrorist-warning database already existed in the government's coalition agreement, but had stalled because of foot-dragging by the liberal Free Democratic Party. The FDP, which governs in coaltion with Merkel's conservatives, stands for strong privacy protections. "The FDP's willingness to cooperate on this doesn't seem very enthusiastic, to say the least," he said.

On Saturday, an Iraqi-born Swede set off two explosions in what was apparently a failed plot to kill Christmas shoppers in Stockholm. The FBI, America's federal investigative agency, will send bomb experts to help with the investigation. Swedish Justice Minister Beatrice Ask explained to Swedish TV on Monday that a small nation sometimes lacks the required experts for public investigations, and British investigators have also been engaged to help.

The US and Britain also have an interest in the case, because Taimour Abdulwahab, the 28-year-old Swedish citizen who allegedly set off the bombs, spent his childhood in Iraq and moved to Britain almost a decade ago. British police have searched his home in Luton near London, where he left a wife and three children.

Abdulwahab died from self-inflicted wounds on Saturday after his backpack filled with nails and explosives blew up near Drottninggatan, one of the busiest Christmas shopping streets in Stockholm. A few minutes earlier, about 200 meters away, a white Audi had exploded, wounding two passersby.

DNA tests have yet to come in, but Tomas Lindstrand, Sweden's chief prosecutor, said his office was "98 percent certain" the bomber was Abdulwahab. "He had a bomb belt on him, he had a backpack with a bomb and he was carrying an object that has been compared to a pressure cooker," Lindstrand said, according to AFP. "If it had all blown up at the same time, it would have been very powerful."

"Where he was headed … we don't know," Lindstrand said. "It is likely that something happened, that he made some kind of mistake that led to part of the bombs he was carrying (going) off and caused his death." However, he added, "it is not much of a stretch to say he was going to a place with as many people as possible."

Abdulwahab was born in Baghdad but came to Sweden in 1992. He moved to Britain in 2001 and trained in Luton as a physiotherapist. He returned to Sweden only about two-and-a-half weeks ago, according to the UK Guardian. The chairman of a Luton mosque the bomber apparently attended in 2006 or 2007 said he seemed "bubbly" at first. But he grew more radical and finally "stormed out of the mosque and was never seen again."

Swedish authorities claim to have email messages and a voice-mail file traced to Abdulwahab's mobile phone. The messages, which give reasons for the attack, also went to the Swedish news agency TT. In the audio message, a man speaking Arabic and Swedish with an English accent can be heard saying Swedes would die because of Stockholm's support for the war in Afghanistan and because of a cartoon by a Swedish artist, Lars Vilks, depicting the Prophet Muhammad as a dog.

"We now exist here in Europe and Sweden," the man's voice says. "We are a reality. I don't want to say more about this. Our actions will speak for themselves."

Swedish authorities assume from the message that Abdulwahab belonged to a larger group, but reports that he spent time training in Pakistan or Iraq could not be confirmed. One picture on his Facebook page -- which no longer exists -- shows him in Jordan, according to terrorism and defense news website The Long War Journal.

But Abdulwahab was not known to Swedish authorities before the blast, in part, they say, because he spent so much of the last 10 years in Britain. Lindstrand said Swedish security was not "a Stasi organization" in the habit of monitoring people's Facebook pages. 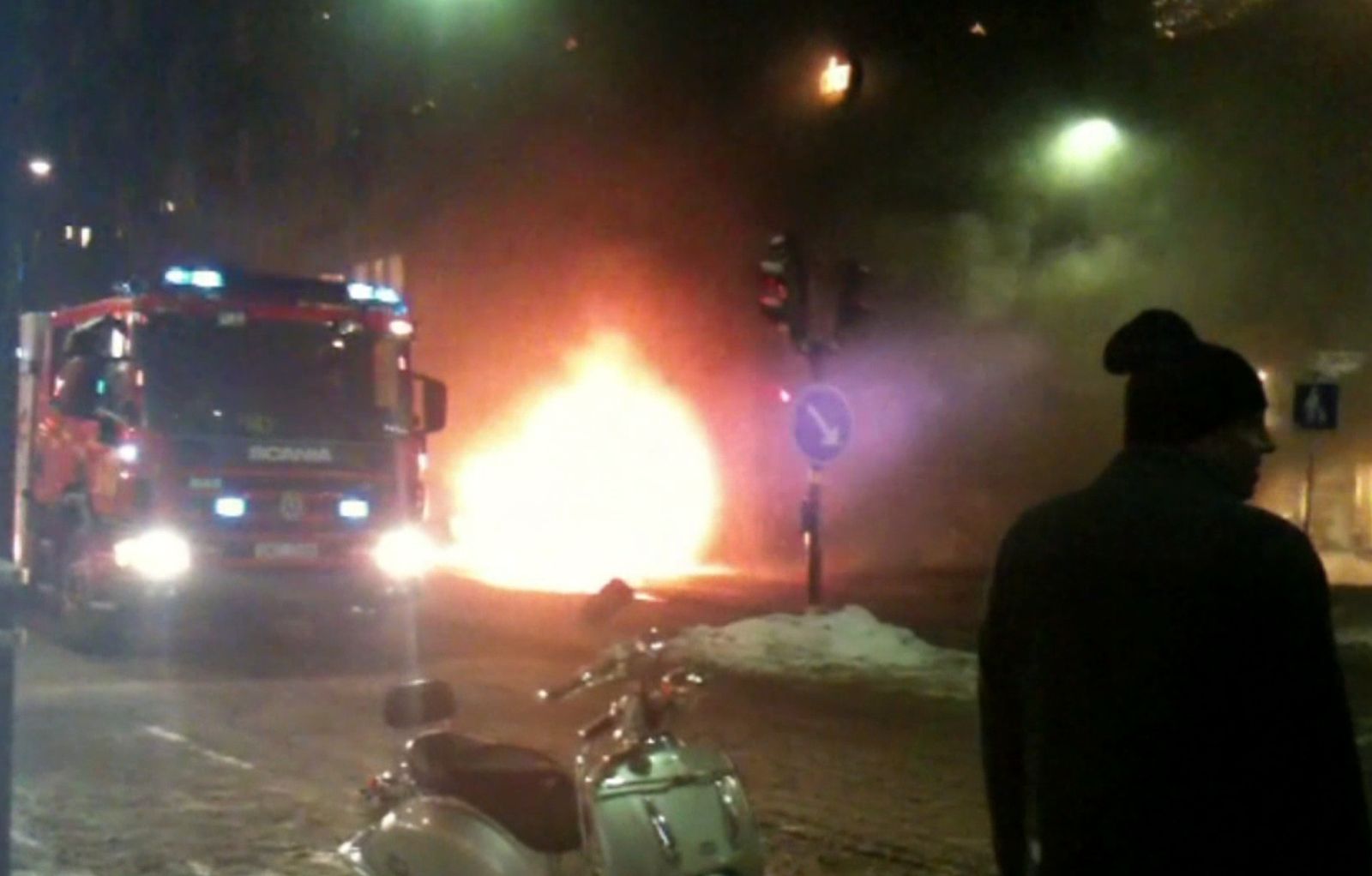 A video grab shows a fire engine arriving at the scene of a car explosion on December 11, 2010 in Stockholm. An Iraqi-born Swedish man blew himself up about 200 yards away.