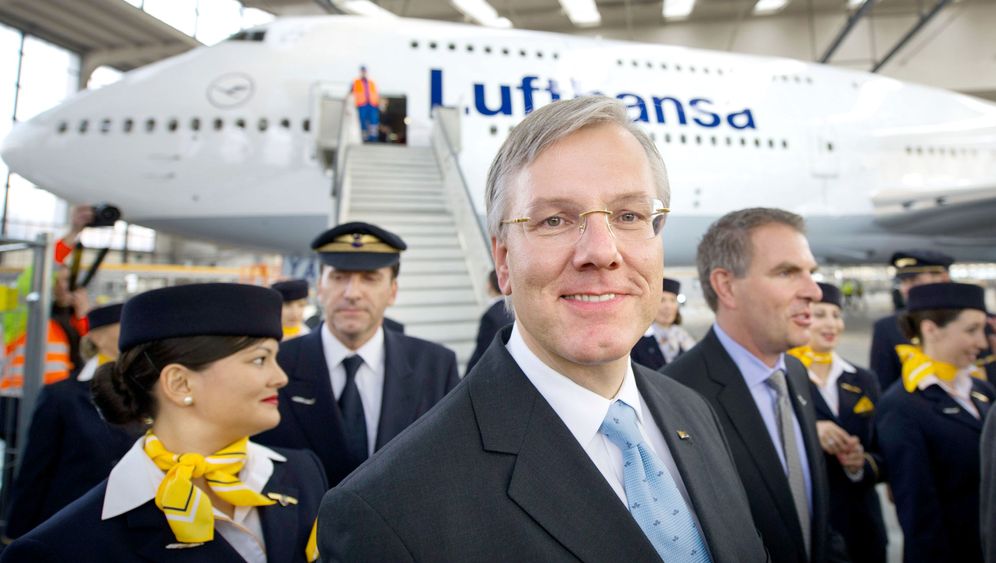 Every Friday, the employees of the German airline Lufthansa receive the new issue of their employee newspaper, which many of them promptly toss into the wastebasket. The somewhat stuffy informational newsletter rarely contains anything exciting, and readers are often put off by the instructive and often PR-laden tone.

Last week's issue will likely be spared the usual fate. Under the headline "Good news - bad news," Lufthansa Chairman and CEO Christoph Franz explains in detail, for the first time, why he intends to save €1.5 billion ($1.95 billion) in the next two years and cut one in five administrative jobs.

"Our sales have doubled in the last 10 years," Franz informs his employees. But unfortunately, he adds, profits "have not kept abreast." This has to change, Franz explains, so that the company can pay for 170 aircraft it has ordered without having to take on more debt.

Whether Franz's explanation will be enough to reassure Lufthansa's anxious employees remains to be seen. New details about the "SCORE" efficiency enhancement program, introduced at the beginning of the year, have been leaked to the public every week. Some rumors, like the elimination of 2,500 jobs in Germany, have already been confirmed. Others, such as speculation over the establishment of a new discount carrier, have turned out to be wrong. In internal Internet forums, the efficiency program is already being referred to as the "Scare" program.

Although this may be somewhat exaggerated, Lufthansa employees do have reason to be concerned.

Until several days ago, it almost seemed as if the company had cleverly concocted the uproar over the cost-cutting program to adopt a threatening position ahead of wage negotiations for cabin employees and pilots. But since last week, when Lufthansa released its financial figures for the quarter ending in March and was forced to announce a loss of almost €400 million, it has been clear to even the last skeptics that Europe's largest airline is in serious trouble.

Under Franz's predecessor Wolfgang Mayrhuber, who was supposed to assume the chairmanship of the supervisory board in about a year, the company had sought to enhance its appeal to premium customers in First and Business Class, and had even built new, exclusive luxury lounges for them -- albeit without much success. In fact, frequent fliers have given the German airline low marks for service and comfort on board its aircraft.

A Decade of Mistakes

At the same time, Lufthansa also acquired substantial interests in Brussels Airlines, the successor to defunct Belgian flag carrier Sabena, AUA, the parent company to ailing Austrian Airlines, and the traditional British carrier BMI. After the Alitalia bankruptcy, Lufthansa also tried to gain a foothold in Italy. But most of the airline's new investments proved to be mistakes.

The upgrades to its services and the investments abroad cost the company a great deal of money -- money that would probably have been better spent to buy new, more fuel-efficient aircraft. "The fact that we have not modernized our fleet in a timely manner is an obvious mistake on the part of management," says Stefan Ziegler, the chairman of the group that represents all flight personnel.

Now everything has to happen very quickly -- too quickly, in fact, for many labor representatives. "Mistakes that were made in the last 10 years," says Ziegler, also a member of the Lufthansa supervisory board, "can't be fixed within two to three years."

Still, Franz and his team want to try. The plans to combine decentralized European flights with low-cost subsidiary Germanwings are apparently relatively far along, according to a confidential 12-page presentation.

Restructuring of Business Outside Frankfurt and Munich

The concept, which was presented to the representatives of flight personnel for the first time last Friday, explains in detail how the company intends to make its business beyond the Frankfurt and Munich hubs profitable, which appears to be urgently necessary. According to one set of figures in the presentation, subsidiary Germanwings has only turned a profit once since 2005 -- all of €18 million in the 2009 fiscal year.

The situation is apparently even more serious for Lufthansa's decentralized European business, which hasn't been in the black since 2005. Instead, both 2009 and 2010 saw losses totaling more than €200 million, attributable in part to the regional subsidiary Eurowings.

Lufthansa management now wants to rename Germanwings and call it Direct4U. In addition to its existing fleet, the airline would add several dozen short- and medium-range Lufthansa aircraft from other units.

In the future, the new company's planes would only bounce back and forth, like ping pong balls, between their respective origin and destination cities -- a model demonstrated by discount icon Ryanair for years -- and would divide up flights to cities like Berlin, Stuttgart and Hamburg. The refurbished Lufthansa subsidiary would be allowed to purchase services such as ground handling on the open market in the future, a sacrilege in the company's 57-year history. It is still unclear how many jobs could be eliminated as a result.

Other proposals in the detailed plan seem similarly sacrilegious. The new, internally developed low-cost platform is also expected to assume responsibility for long-haul flights in Düsseldorf in the future. Lufthansa has already had to cancel a planned route from that city to Tokyo until further notice, due to a lack of demand.

The goal of this and other measures is to reduce losses by €50 million a year starting in 2012 and, as of 2015, to finally generate a profit on domestic routes in Germany and on decentralized European routes. However, this is premised on the price of crude oil falling by almost 16 percent by then, a highly optimistic assumption.

Although the costs of the new shared company are to remain at the current, lower level of costs at Germanwings, management hopes to continue charging passengers the same prices they have paid for classic Lufthansa services until now. "It's as if you were to sell a customer a VW at the price of a VW, but with the interior of a Skoda," employee representative Ziegler, who is also a Lufthansa pilot, said when contacted by SPIEGEL, referring to vehicles made by VW's lower-cost Czech subsidiary.

A company spokesman says that the plans are "nothing but a concept at this point," and that the executive and supervisory boards have not reached any concrete decisions on the matter yet.

Stiill, that is unlikely to allay the fears of employees, especially after it was leaked late last week that several hundred jobs could also be lost at Lufthansa Technik, the company's engineering division.

Nevertheless, the Lufthansa CEO tried to reassure his employees in the newsletter. Lufthansa, Franz wrote, is still "in a position of strength" and has a solid "financial foundation." For this reason, he added, Lufthansa has not had to take any action out of necessity so far.

Many employees will likely have gained a different impression in recent weeks.