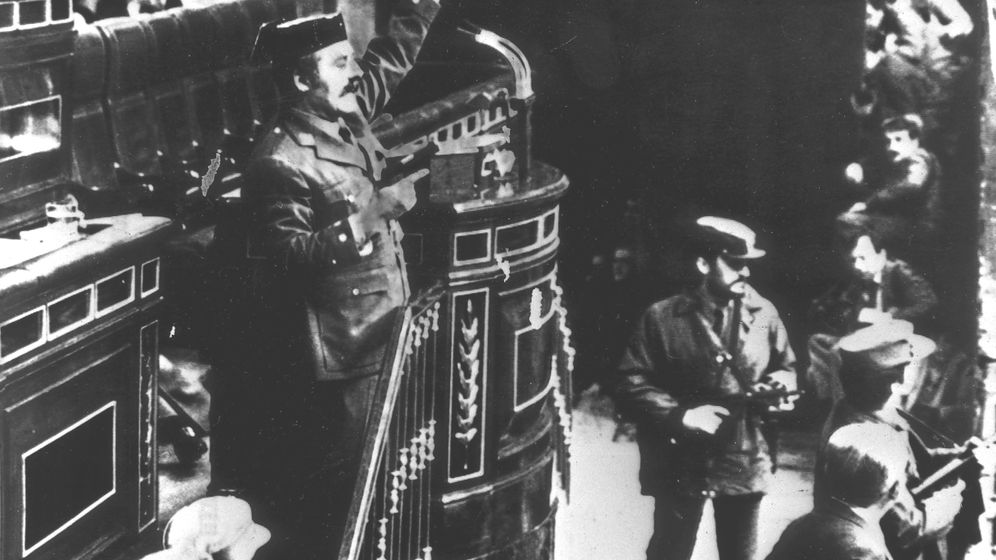 Photo Gallery: Sympathy for the Plotters

In a normal year, Feb. 23 is a good day for Spanish King Juan Carlos. On that day, Spaniards commemorate the putsch attempt of 1981 and celebrate their monarch as the savior of the then-young democracy. At the time, dictator Gen. Francisco Franco, who had ruled the country since 1939, had only been dead for five years and three months. His most ardent followers among the military brass were set on re-imposing military rule in the country. But Juan Carlos stood in their way.

But 2012 is no normal year. At the moment, the king's son-in-law Iñaki Urdangarín is being tried before a court in Palma de Mallorca. The husband of the king's youngest daughter Cristina, he stands accused of having embezzled several million euros, together with others, as head of a foundation. What's more, a survey conducted by a social research institute last October indicated that, for the first time, there has been a considerable decline in people's faith in the monarchy. In any case, it shows that 47 million Spaniards have primarily supported Juan Carlos himself rather than the monarchy as an institution.

And now, at the worst possible moment, a document has emerged that casts a shadow on the sparkling image of this supposedly flawless democrat in the Spanish royal family.

'No Indication of Antipathy or Outrage'

The man who wrote the document was Lothar Lahn, who served as Germany's ambassador to Spain between 1977 and 1982 and was well-liked by Juan Carlos. On the evening of March 26, 1981, the then-43-year-old king invited the diplomat, 16 years his senior, to his residence, Madrid's Zarzuela Palace, for a private conversation. The meeting had been called to discuss the upcoming visit of Germany's president to Spain. But Juan Carlos quickly brought the conversation around to the failed coup attempt of Feb. 23, revealing how he really felt about it: He was quite sympathetic.

Lahn then reported back to Bonn, the West German capital, that the king "showed no indication of either antipathy or outrage vis-à-vis the actors (in the plot) but, rather, displayed much more understanding, if not sympathy." He wrote that Juan Carlos had stated, "almost apologetically," that the insurrectionists "only wanted what we are all striving for, namely, the re-establishment of discipline, order, security and calm."

The king reportedly told Lahn that it was the democratically elected former Prime Minister Adolfo Suárez, rather than the coup leaders, who bore particular responsibility, because he had failed to establish "a relationship with the military" and refused to take their "justified wishes" seriously.

Suárez, said the king, had "despised" the military. He, Juan Carlos, had often advised Suárez "to respond to the military's ideas," but without success. Eventually, the king said, the military had decided to "act on its own initiative."

The king then allegedly added that he now wanted to influence the government and the military courts, so that "not too much" would happen to the coup leaders, "who obviously only wanted the best" for the country.

Julián Casanova, a professor at the University of Zaragoza who is one of the leading authorities on contemporary Spanish history, believes that Lahn's teletype, which bears the message number 524, is "extraordinarily important." That's because it is the only written proof to date that Juan Carlos might have secretly been nostalgic for the kind of military rule that Franco had taught him to appreciate. The dictator had brought Juan Carlos, who was just 10 years old at the time, back to Spain and later appointed him as his successor.

For years, Casanova himself has made vain attempts to gain access to documents such as the transcripts of the trials of the failed putschists. All Spanish documents related to that fateful day in the history of the country's democracy will remain confidential until 2031. Similarly, the relevant files from the US Embassy in Madrid won't be released until that year at the earliest.

Indeed, Casanova says that, until this document emerged, there has never been such clear evidence that Juan Carlos "was not the same democrat that he is today."

There is probably no doubt about the authenticity of the statements that Lahn attributed to the king and transmitted to Bonn. Granted, Lahn can no longer answer questions about them -- he died in 1994. Likewise, the Spanish royal house will not comment on the content of Lahn's discussion with Juan Carlos because, as one spokesman says, there is no record of this "private conversation" in the official archives of Zarzuela Palace. Nevertheless, Lahn was regarded as reliable by his colleagues. His teletype, which sits in the political archive of the German Foreign Ministry in Berlin, has now been declassified by the government and published as part of an anthology of documents related to German diplomatic activities in 1981.

It has long been known how the king behaved toward the military officers who launched the Feb. 23 coup attempt, in the days that followed and during all his public appearances to date. On that night, when the Guardia Civil, led by Lt. Col. Antonio Tejero, took the government and lawmakers hostage in the parliament building, it was Juan Carlos who spoke with the coup's ringleaders and all important generals by phone.

He made it clear to them that, contrary to their claims, he -- as the supreme commander of the Spanish military -- did not back their actions. In a television address he delivered that night, he said that the crown could not "accept any acts or deeds that aimed to impede the constitutional process that the Spanish people had approved through a referendum."

Comments like these make the oddly sympathetic ones he made a month later even more astounding. Indeed, it appears now that it was much harder than previously known for the man who was crowned Spain's king in Nov. 1975 to abandon the dictator's legacy. What makes this less surprising is the fact that Juan Carlos knew all the military brass very well, having trained in various branches of the military. His instructor in all of this was Gen. Alfonso Armada, who went on to be his private secretary for 17 years. After a period of estrangement, the king appointed Armada to be the armed forces' deputy chief of the defense staff, just 11 days before the coup attempt was launched. Armada used his proximity to the king to make his fellow conspirators believe that he was acting on his instructions. Juan Carlos would later tell Lahn that he was disappointed by his behavior. With typical esprit de corps, the king adopted a protective attitude toward the other military conspirators.

At the time, the political mood prevailing in the country was agitated. The officers who had fought alongside Franco during the country's civil war had been eager to launch a coup ever since the first democratic elections were held in 1977, two years after the dictator's death. The young king only fed these desires to return to a military dictatorship by going against Franco's wishes and appointing a reformist politician such as Adolfo Suárez to fill a key position in the still authoritarian state. What's more, Suárez legalized banned left-wing parties, including the communists. Spain's economy was a shambles, and the Basque separatist militant group ETA continued to sow terror even after the end of the dictatorship.

Paul Preston, a well-known British historian who specializes in Spanish history and has written a biography of Juan Carlos, says that, like many other Spaniards, the king was worried about the Suárez government's loss of authority. After Suárez stepped down on Jan. 29, 1981, the king consulted with the heads of all political parties. Preston believes that they were willing to approve a national unity government including military elements. But, rather than choosing his confidant of many years, General Armada, to fill this role, the king tasked the conservative politician Leopoldo Calvo Sotelo with forming a new government. In fact, on the very day the putschists stormed the parliament, Sotelo was supposed to be elected Spain's new prime minister.

Opening Up to a Foreigner

There is still some question about why the king would open up to a foreign diplomat. Was the king, who otherwise appeared so disciplined, simply speaking from the heart and counting on confidentiality when he revealed his anger? Or was he trying to downplay the whole episode because he was worried it could hurt his country's image? After all, at the time, Germany was Spain's most important advocate in its efforts to join NATO and the European Economic Community, the predecessor to the European Union. Indeed, Juan Carlos even told Lahn that the "Spanish military, also within a European and Atlantic scope, needed to be assigned a new task that it could only fulfill within NATO." The king, who was well disposed to Germany, reportedly told Lahn that people should forget what happened on Feb. 23 "as soon as possible" and expressed his confidence that it would not happen again.

The king was fortunate that Lahn's report got lost in the bureaucratic machinery in Bonn. Since neither then-German Foreign Minister Hans-Dietrich Genscher nor then-Chancellor Helmut Schmidt initialed the document, they most likely didn't read it. Indeed, both of them only seemed to be familiar with the king's bright side. Just a few days after Lahn visited the royal palace, Schmidt would be effusive about the "excellent role" the king was playing. Juan Carlos was a "very dependable and stable character," he told his French colleague Francois Mitterrand.

A year later, Schmidt would even invite the royal couple to his house in his hometown of Hamburg. The menu included eel, shrimp and Rote Grütze, a traditional German dessert made of red berries. The conversation apparently focused on "God and the world."