German Chancellor Angela Merkel made a major concession at the European Union summit last week by agreeing to give the euro zone's new permanent rescue fund, the European Stability Mechanism (ESM), the power to inject aid directly into ailing banks.

She was pushed into backing down by the leaders of Italy, Spain and France, and Germany's dominance in Europe has been called into question as a result -- although some analysts say she scored a victory by securing agreement to a European central supervision authority for banks, to be run by the European Central Bank.

Some German media commentators say Merkel was forced into a corner by the "blackmail tactics" of Spanish Prime Minister Mariano Rajoy and Italian Prime Minister Mario Monti, aided by French President François Hollande, and that Berlin's relations with Paris in particular have been soured as a result.

The deal has been condemned as a blow to German taxpayers -- but an inevitable one, it seems. Merkel, some commentators write, merely did what she has done right since the start of the euro crisis: stand firm until the time came to give in. If she hadn't caved, the crisis may well have spiralled out of control.

"It made it possible to decouple banking risks from the state risks. Ailing banks like those in Spain that need recapitalizing should no longer pull into the abyss the governments that support them and are finding the bailout increasingly hard to finance. Merkel gave in on this issue. She caved in, some German commentators are saying. If that is so, then she caved in cleverly. The compromise was necessary and sensible. The risk decoupling won't just lead to a short-term calming of markets and end the famous 'death spiral.' It will also give governments enough time to structurally strengthen Europe against new crises."

"But this summit agreement has a flaw too. The chancellor insisted on a functioning European banking supervisory authority being established first. Europe will again lose time as a result. Setting one up isn't a matter of just a few weeks. The chancellor's demand is justified. But it will tempt the Spanish government to delay the necessary banking consolidation. Why should it help banks now if it has to accept conditions and yield increases that it would be spared at a later date? Madrid's delaying tactics are dangerous and only increase the danger of a euro exit."

"German Chancellor Merkel has largely herself to blame for being labelled as the loser of the EU summit by the opposition in the parliamentary vote on the ESM bailout fund. Her offhand remark 'as long as I live' following the statement that there would be no 'total debt liability' in the euro zone created the impression that the German position in the Brussels negotiations would be set in stone. But it's the nature of negotiations, especially in the EU, that everyone involved makes concessions from their initial positions in order to reach a compromise. That also applies to Germany, even though it is the supporting pillar of the currency union."

"The tactical ploys used to reach compromises are a different matter. Frau Merkel was blackmailed pretty brutally by politicians from the south who share fundamental long-term German principles, by the Italian Monti and the Spaniard Rajoy (with support from the Frenchman Hollande), because these countries need swift aid. It will soon become clear if the new Brussels agreement will achieve that. But it's certain that these blackmail tactics will leave marks. Relations between Paris and Berlin in particular are severely strained. President Hollande will get a sense of that at the next opportunity."

"At the latest EU summit Germany -- again -- agreed to a lot of solidarity without getting much control in return. There is a big danger that the euro zone will get into an ever deeper imbalance as a result. If ailing economies can get at the money of solid states more easily, this will inevitably strengthen the opponents of a rigorous reform program in those countries. Rome and Madrid are unlikely to find it difficult to decide whether they would rather burden their citizens and their children and grandchildren or the German taxpayer. And Germany won't even have a veto right in the permanent rescue fund in future because qualified majorities will suffice for aid. It remains to be seen whether the euro will survive the institutionalized irresponsibility."

"It was an unsual image: Angela Merkel as the loser. She had to back down in Brussels. The ESM will dole out loans to crisis nations without imposing tough austerity. After Merkel's vow to fight forever against mutualized debt in the EU, that didn't look so good. The apparent defeat in Brussels is nothing new. It fits seamlessly into Merkel's strategy - or rather, her pattern of reaction -- since the euro crisis started. She always said no, only to abandon each no when it became opportune to do so."

"Merkel followed a political cost-benefit calculation. A German victory in Brussels over an Italian technocrat government being crushed by interest rate burdens would have been more expensive than this defeat. An EU summit without a result would have brought the euro's implosion dramatically closer. But Germany already won in the EU long ago. Berlin has europeanized the German economic model by imposing the fiscal pact. The price will be paid by less export-focused nations being forced into rigid austerity. And things look good for Merkel in Berlin too. Effectively, she's governing not with a center-right government but with a grand coalition of conservatives, Greens and center-left Social Democrats. The liberals (the pro-business Free Democratic Party, junior partner in the center-right coalition) are allowed to complain a bit. Meanwhile, the Social Democrats are bravely trying to persuade themselves that they won't be her junior partner again in 2013 (the next general election is scheduled for 2013. The SPD was the junior partner in a so-called grand coalition wit Merkel's conservatives from 2005 until 2009)." 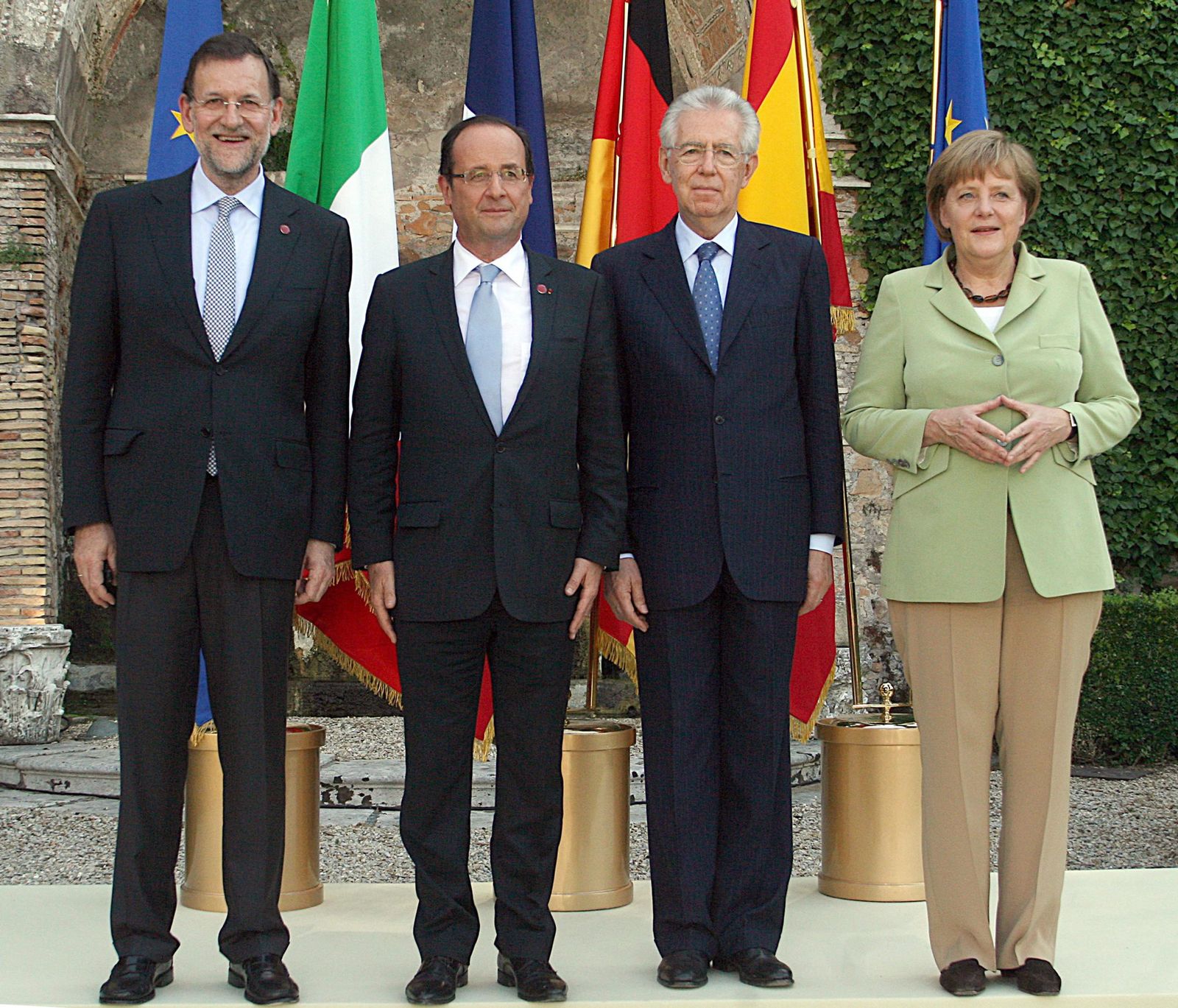