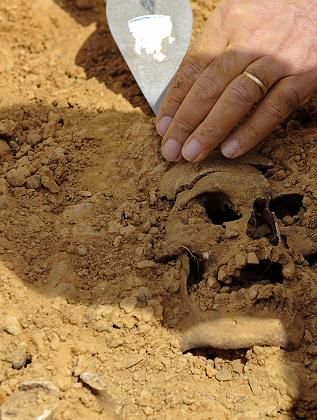 A number of groups in Spain are dedicated to finding Franco's victims. This image is from a dig by Emilio Silva's Association for the Recovery of Historical Memory.

It is a monument visited by hundreds of thousands of people each year. On Sundays, some travel from nearby Madrid to lay wreaths at the site. But just what the memorial, known as the Valley of the Fallen, stands for is not entirely clear.

Officially, it commemorates everyone who died in the Spanish Civil War, fought from 1936 to 1939. But the Valley of the Fallen monument, a vast complex dominated by an enormous granite cross, also contains the mausoleum in which the body of General Francisco Franco, Spain's fascist dictator, is buried. It was built using the slave labor of political prisoners.

Indeed, the Valley of the Fallen has recently come to symbolize a Spain still scarred by its civil war and almost four decades of Franco's iron-fisted regime. Some, though, have begun picking at that scab. This week, a Spanish judge began collecting information with an eye toward creating an accurate list of those killed during Franco's dictatorship. In doing so, he has turned up the heat on a long-simmering national debate.

"This is great news for the families of victims," Emilio Silva told SPIEGEL ONLINE. Silva is head of the nonprofit Association for the Recovery of Historical Memory (AMHA), which has excavated 120 mass graves since 2000 containing the remains of around 1,200 people.

Judge Baltasar Garzon, who sits on Spain's National Court, sent official requests this week for information on Franco victims to various government archives, city halls and the Catholic Church -- and to the keepers of Franco's tomb. He wants details including victims' names and the dates and circumstances of their deaths.

Depending on the replies to his inquiries, Garzon's court may be able to assume jurisdiction over the cases and go after the perpetrators -- provided he finds evidence of systemic violence. Garzon made his requests after receiving about 1,200 petitions from families and associations asking for information about those who disappeared during Franco's reign between 1936 and 1975. 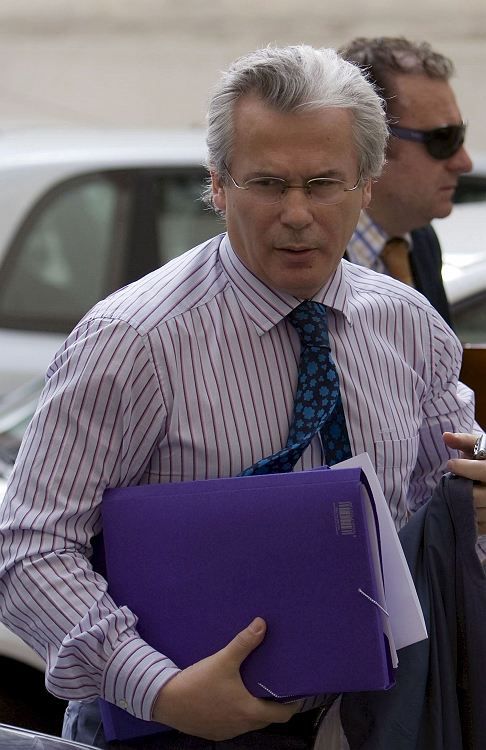 The number of those killed during the Spanish Civil War is contested, with historians estimating about 500,000 on both sides combined. Under the Franco dictatorship, however, dissidents were often shot out of hand. Even as the dictator's regime honored its own dead, it left as many as 55,000 political opponents buried in unmarked graves across the country.

"People are still afraid to talk about it; it is a politically dangerous topic," said Silva. "We are just now taking the first steps to create a new generation -- the grandchildren who know about it."

Garzon -- who gained prominence with his attempt to extradite former Chilean dictator Augusto Pinochet for crimes committed during Chile's "dirty war" -- has made his move just under a year after Spain passed the Historical Memory Law, aimed at recognizing the victims of Franco's regime and removing fascist symbols from public places, including statues and monuments honouring Franco.

Since then, both Silva's group and Amnesty International have objected to the fact that justice for the victims has largely fallen to volunteer initiatives. The Spanish press hailed Garzon's move as the first official application of the Historical Memory Law.

Still, the approval is far from universal. A general amnesty was passed in 1977 and, since then, many Spanish have been reticent about their historical ghosts. A non-scientific opinion poll by conservative Barcelona-based paper La Vanguardia showed 56 percent in favor of Garzon's initiative -- but 43 percent opposed.

Mariano Rajoy, leader of the conservative People's Party, is likewise against Garzon. "I'm not in favor of opening the wounds of the past," he said at a Tuesday press conference. "They won't lead us anywhere."

Beyond the Arm of the Law?

Some of Garzon's judicial colleagues are likewise not convinced that a legal case is the best way to deal with the Franco era. All three Spanish professional judicial groups, which operate in lieu of unions for judges in Spain, have spoken out against Garzon's initiative. Members from the conservative Professional Association of Magistrates to the progressive Judges for Democracy think that legal proceedings would be a mistake.

"A legal investigation would collide with a pillar of democracy," Judges for Democracy spokesperson Miguel Ángel Jimeno told SPIEGEL ONLINE. "Besides, most of the people who committed crimes are now dead."

Trying to bring Spain's history within the scope of the judiciary "perverts the debate," said Jimeno. He agrees with Garzon, however, that Spain must reckon with its fascist past.

"It remains to be seen whether the overloaded Spanish judiciary can take on the enormous job Garzon has placed on their shoulders," said an editorial in left-leaning El Pais. "But, in any case, the measure will help open archives that were closed and which may fall outside the scope of the law but will be useful to history."

Even if Garzon's inquiries do not end in a traditional court case, Silva hopes they might lead to a governmental truth commission that would assist in exhuming mass graves and provide a forum for victims' families to give testimony. He calls Garzon's move "a good first step."