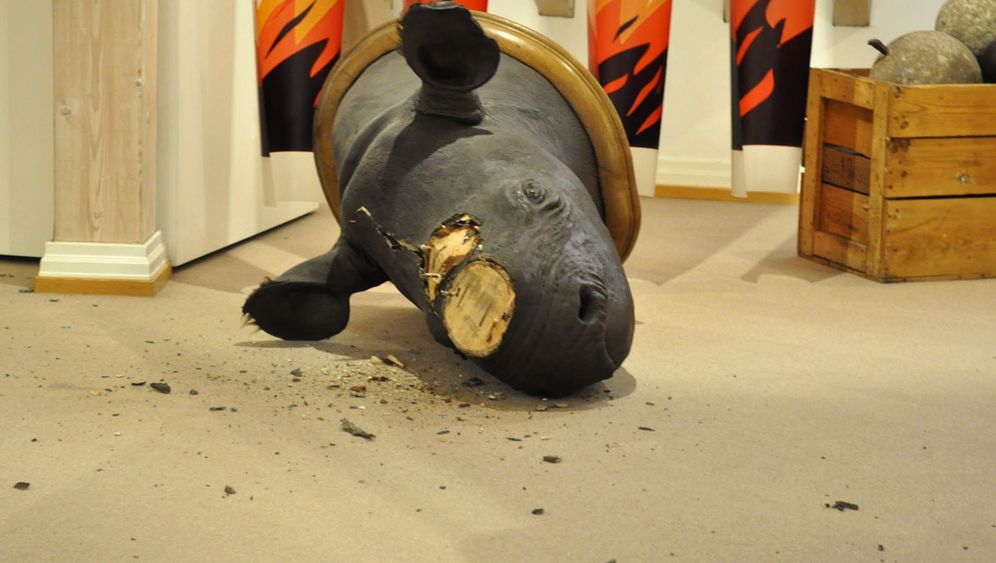 The large collection of African hunting trophies at the Offenburg Museum in the southwestern German city of the same name has long been a source of great pride at the cultural institution. It is based on around 80 stuffed animals donated to the museum in 1950 by Gretchen Cron, a wealthy woman who, together with her husband, spent much of her life hunting in exotic places until the outbreak of World War II. Cron felt so guilty about killing so many animals in danger of extinction that she donated her collection to the museum.

Among the trophies displayed was the head of a black rhinoceros, a species native to South Africa. On Saturday, Feb. 18, four thieves entered the museum during broad daylight. Two of them distracted the museum staff and the two others rushed over to the rhino head. They removed the trophy from its display, mounted at a lofty 4 meters (13 feet), and broke off its horn with a sledgehammer. Museum officials described the act as "brazen and brutal."

Three weeks later, last weekend, police in Munich arrested two men and a woman in connection with the attack, which is part of a growing and disturbing trend in thefts of rhinoceros horns in Europe. Officials believe the thefts may be related to the popularity of rhino horns in East Asian traditional medicine.

Officials at Europol, the European Union's criminal intelligence agency, claim the number of thefts of rhinoceros horns has increased sharply in Europe during the past year. Since 2011, the agency has recorded 56 successful and 10 attempted thefts. Criminals purloined horns from museums and private collections in 15 countries, with many of the thefts believed to be linked to "an Irish and ethnically Irish organized criminal group, who are known to use intimidation and violence to achieve their ends." The group is believed to be active in Asia, North and South America and Europe.

Rhinoceros horns, which contain high levels of the protein keratin, have long been used in East Asian traditional medicines. "Rhinoceros horn is touted as a cure-all," Rhishja Cota-Larson of the California-based organization Saving Rhinos told SPIEGEL ONLINE. "It supposedly treats eczema, anxiety, convulsions, boils and devil possession," she said. Europol spokesman Soren Pedersen said the increase in crimes may also be linked to a rumor that rhinoceros horns can cure cancer. But scientists have not found the horn, which is ingested in powdered form, to be of any medical benefit. "You'd get the same effect by chewing your fingernails," said Nigel Monaghan, keeper of the National Museum of Ireland, which has a significant collection of taxidermy animals.

Health properties or not, the horns are extremely valuable, with a black market value as high as €50,000 ($65,500) per kilogram: more than its weight in gold. Depending on the size and quality, Europol estimates that a single rhino horn can be worth between €25,000 and €200,000. In addition to traditional medicines, they are also used as decoration or to produce luxury goods. In some cases, auction houses in Britain, France, the United States and China have been used to sell the stolen horns. Wildlife experts believe that a large number of the horns are sold to Vietnam and China.

'These Smash and Grab Style Cases Are New'

Given the possible connection between an Irish criminal group and the crimes, Monaghan and officials at the National Museum of Ireland have implemented preventative security measures by removing rhino horns from display and replacing them with replicas. "These crimes have really taken off in the last two years," he told SPIEGEL ONLINE. "In the wild, poaching has been going on for decades, but these 'smash and grab' style cases are new."

Norbert Niedernostheide of the German Museums Association told the Süddeutsche Zeitung newspaper that, over the past year, there have been more than 10 cases in which thieves entered museums, auction houses or zoos to steal rhino horns. Exhibits have disappeared in Hamburg, Münster, Bamberg and the town of Sebnitz in the eastern state of Saxony. But thieves have also struck elsewhere in Europe, including France, Britain, Sweden and the Czech Republic.

Preventative measures are being undertaken at a number of museums around Europe. In Germany, Bamberg's Museum of Natural History installed extra security after a thief broke into the facility last summer and used a screwdriver to prize open the display case containing the museum's only wide-mouthed rhinoceros horn. One museum worker said the theft "was a big loss for the museum."

But it isn't only taxidermy rhinos that are threatened. In their natural habitats in Africa and Asia, fewer than 30,000 rhinoceroses still roam in the wild today. Javan rhinos, with a population of just under 50, are under particular threat of extinction.

The rise in the sale of rhino horn on the black market poses a significant threat to the survival of different rhino species. In 2011 alone, the conservation group WWF, formerly known as the World Wildlife Federation, estimated that 448 rhinos were illegally killed in Africa.

In Offenburg, Germany, officials view February's burglary as an attack on the museum's openness. More than one-third of the museum's visiters are children and youths and Offenburg has used the concept of an "open museum" for the past 20 years as the inspiration for all of its exhibitions. "It's part of the charm and success of the museum," a statement read.

In light of the theft, the museum plans to tighten its security with the help of the police to thwart the increasingly "brazen and brutal methods" used by criminals. They also plan to rehang the hornless Rhino trophy in order to "spur new discussions."