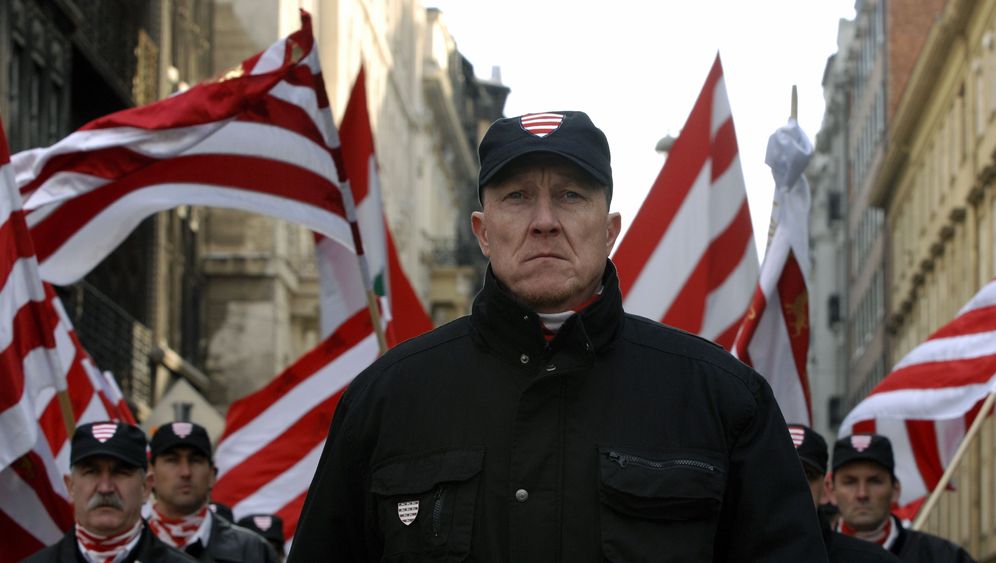 Hungary's controversial new constitution, in force since the beginning of the year, evokes the spirit of a long-past era: the thousand-year-old Hungarian state that is represented by the Holy Crown of Saint Stephen I. The constitution pledges to "protect" the unique Hungarian language, Hungarian identity and national culture. It is a thinly veiled throwback to the spirit of the interwar period, when the country was ruled by Miklós Horthy, who established an authoritarian, ultraconservative nationalist and revisionist regime.

Now, under the leadership of conservative Prime Minister Viktor Orbán, this spirit is more or less taking concrete form. In mid-May, a statue of Horthy was erected in Kereki in southwestern Hungary. It was something of a first in post-communist Hungary. After all, Miklós Horthy was a notorious anti-Semite and the leader of the White Terror, a wave of post World War I, anti- Communist violence which claimed many Jews as its victims. As head of state in 1944, he was responsible for the mass deportation of 400,000 Hungarian Jews who were murdered in Auschwitz.

A few days after the dedication of the Horthy statue, the reformed bishop Gusztáv Bölcskei unveiled a restored marble Horthy plaque at the Debrecen University of Reformed Theology in eastern Hungary. Then on Friday, June 1, Freedom Square in the town of Gyömrö, southeast of Budapest, was renamed after the right winger. More Horthy statues are set to be erected, also in Budapest -- even though Horthy despised the city, calling it a "Jewish Bolshevik cesspool of vice." A dedication is being in planned in October for a larger-than-life-size statue of Horthy on horseback in Budapest's Castle Hill district. Journalist Gábor Czene says that there is a "creeping Horthy cult" on the rise.

But it's not just the former regent who is being honored in Orbán's new Hungary. The Hungarian Parliament is pushing for the reburial of the writer József Nyírö, who was once sought after as a war criminal, in his homeland of Transylvania in Romania at the request of the Hungarian minority party there. Nyírö was a prominent cultural ideologue under Horthy. He later served as a member of parliament during the reign of terror of the national socialist Arrow Cross Party from October 1944 to March 1945, a time when tens of thousands of Hungarian Jews were sent on death marches or massacred. Nyírö fled to Franco's Spain after the war.

Nyírö's reburial was originally planned for May 27, Pentecost Sunday, but the Romanian government banned the ceremony. So in place of the reburial a small ecumenical service for the writer took place instead at his birthplace of Odorheiu Secuiesc. In addition to the leadership of the right-wing extremist party Jobbik, Hungary's powerful State Secretary for Culture Géza Szöcs attended the service along with the speaker of the Hungarian National Assembly, László Kövér, formally the second highest official in the country. Kövér behaved as if Transylvania had become a part of Hungary after World War II instead of being returned to Romania. He complained that the Romanian government is "uncivilized," "paranoid," "hysterical," and "barbaric," because they banned the reburial ceremony. He announced that they will bury Nyírö one way or the other on that spot. Kövér concluded that the people "who had a son whose ashes were feared" would be "victorious."

A few days after the ceremony, State Secretary for Culture Géza Szöcs told the Hungarian news website index.hu that the urn with the ashes of the Arrow Cross Party writer had been smuggled into Romania. It required a plot, he said, because transporting the urn "was not exactly easy." However he did not take part in the smuggling activity, he added, saying he didn't know where the urn is. The reburial of Nyírö will take place soon, he said. Szöcs appeared at the service with a large bag which he placed under a portrait of the author as he delivered the eulogy. Szöcs did not want to "either confirm or deny" whether the urn was inside.

The new Horthy cult and the attempted Nyírö reburial are part of a populist-nationalist renaissance in Hungary, which right-wing extremists have successfully been promoting in the country for years. Now Prime Minister Viktor Orbán and his right-wing conservative Fidesz party are also eagerly pushing it.

Some observers are appalled at the development. "Why is Fidesz associating itself with members of Arrow Cross? Is this how far we've come?" asks political scientist Zoltán Somogyi. "Kövér and Szöcs should resign immediately," he says, otherwise Hungary will be saddled with the reputation of having a government "that supports the Nazis."

Such demands are, however, rejected by the government camp. Some moderate Fidesz politicians and functionaries may feel uneasy with the populist-nationalistic course of the party, but no criticism is made in public. In Orbán's party, loyalty is prized above all else. As a result, official interviews with government representatives often turn into exercises in relativizing. For example, Gergely Pröhle, deputy state secretary for European affairs in the Hungarian Foreign Ministry, says that he "can understand" that the rhetoric of "some political statements" by the Orbán government sound "a bit pre-modern to Western ears," but he says that Hungary is a different country with a different language. He rejects what he calls attempts to "conflate" the conservative government with right- wing extremism and its ideology. "That is a well known tactic of the left in international history," Pröhle says.

Ketchup on the Constitution

One of these leftists is the Budapest lawyer and opposition activist, Péter Dániel. In 2008, he was one of the initiators of proceedings to ban the far-right paramilitary Hungarian Guard movement. He accuses the Orbán government of obsessively pursuing revisionist policies and cultivating an "innuendo-laden, socially acceptable anti-Semitism" that permanently blames "Zionists and Jewish Bolsheviks" for all of Hungary's problems.

Dániel has become known in Hungary for his provocative stunts. For example, he smeared a copy of the new constitution, which was displayed in public, with ketchup. He also wants to take a stance against the Horthy cult. On May 16, he traveled to the town of Kereki, doused the Horthy statue with red paint and hung a sign around the statue's neck reading: "Mass Murderer - War Criminal."

For a few days, the stunt dominated headlines in Hungary. Since then, Dániel has become enemy number one for right-wing extremists. Threats against him have been circulating on numerous far-right Hungarian websites. At one recent public appearance, he received police protection because a right-wing extremist mob had gathered. In response to Dániel's stunt against the Horthy statue, several Holocaust memorials in Budapest were desecrated.

Although groups in the democratic extra-parliamentary opposition reject the new Horthy cult, Dániel's actions are also controversial. "As you can see, this only leads to a war over statues," says Péter Juhász, a leading activist who launched a successful Facebook initiative for more press freedom in the fall of 2010. Juhász says that Hungary needs to thoroughly examine its past and calls for a social dialogue about the limits of tolerance in the country's remembrance culture. "Unfortunately, such a dialogue is not taking place at the moment," he says with resignation.

Indeed, the reality is quite the opposite. Recently, the government adopted a new national core curriculum for Hungarian schools. Required reading will include, among other works, the writings of Arrow Cross author Nyírö and his contemporary Albert Wass, a writer who was sentenced to death in absentia in Romania for war crimes and died in the United States in 1998.

When some teachers' associations protested against the inclusion of far-right and fascist writers in the core curriculum, education minister Rózsa Hoffmann curtly replied that it involved authors who had had a big impact in their own time. "They have now received a worthy place in the core curriculum," she said.