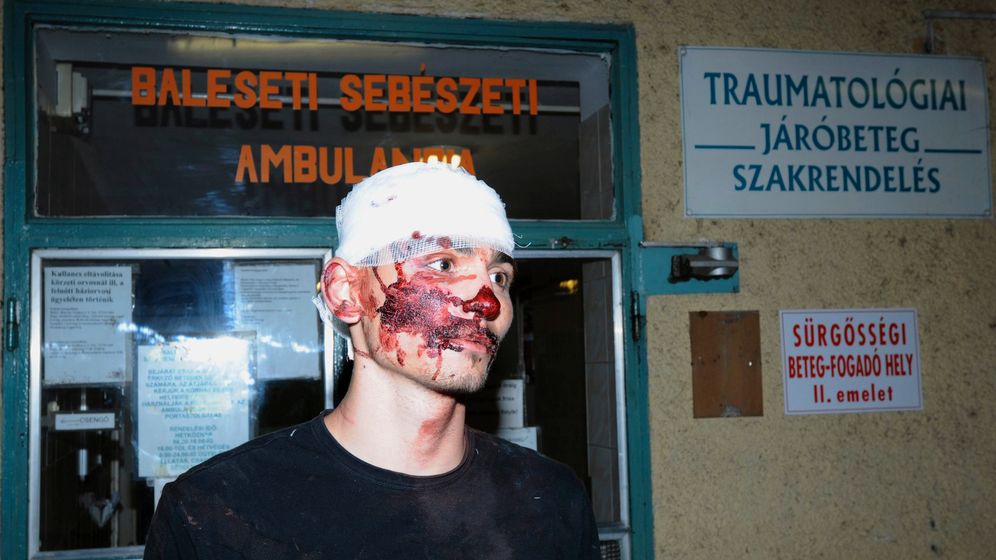 Just a harmless excursion. That is how the Hungarian government sought to portray the evacuation of some 270 Roma residents of Gyöngyöspata over Easter. The group -- two-thirds of the 450 Roma who live there -- had left the village due to a planned training exercise for the right-wing extremist group Vederö, an exercise ultimately prevented by the police.

But on Tuesday evening, right-wing Hungarian radicals struck again. According to the news service MTI, three people were injured in fights between right-wing radicals and Roma in the village. Seven people were arrested.

On Wednesday morning, dozens of right-wing extremists flooded the village, according to a statement released on Facebook by a group sympathetic to the country's Roma population. Large numbers of police likewise arrived in the village. Around 100 Roma left the village on Wednesday, MTI reported.

What caused the fights on Tuesday evening remains unclear. Right-wing radicals are said to have thrown stones at a Roma house in the village. Members of Vederö are thought to have been involved in the brawls on Tuesday, but members of the right-wing group Betyarsereg are also thought to have participated. The group sent "reinforcements" to Gyöngyöspata on Wednesday.

Erik Selymes of the Hungarian Red Cross said that the Easter trip had been organized at the request of the Roma and Hungarian government spokesman Peter Szijjarto called reports of an evacuation a "bald-faced lie."

But Gyöngyöspata, a town of 2,800 residents located northwest of Budapest, has for weeks been the focal point of conflict between right-wing militants and Roma. A resident of the village told Reuters last week that he sent his wife and children to Budapest to avoid confrontation with the right-wing vigilantes.

In March, the uniformed right-wing radical group Szebb Jövöert marched through the village several times, striking fear into the hearts of the Roma who live there. The group is openly supported by the right-wing party Jobbik, which is represented in the Hungarian parliament after having received 17 percent of the vote in elections a year ago. Opposition to the Roma in Hungary was a major plank in the party's campaign platform.

Several other villages with large numbers of Roma residents have likewise seen right-wing marches -- protests, the groups say, which are meant to highlight "gypsy criminality." In the small town of Hajdúhadháza, where members of Szebb Jövöert have been "patrolling" for weeks, five right-wing radicals were arrested 10 days ago for disturbing the peace. They were released just two days later. Gergely Rubi, a Jobbik member of parliament, said the group would continue its marches to "improve public order and security," the German daily Frankfurter Allgemeine reported.

'Afraid to Go Out'

A separate Jobbik parliamentarian, János Volner, said the group is merely responding to the wishes of the populace and has "already caught several criminals red-handed and turned them over to the police," young Roma among them. Dénes Csáfordi, the mayor of Hajdúhadháza, has accused the group of creating an environment of fear in which Roma children "are afraid to go out on the street."

In Budapest, human rights groups are planning a demonstration on Wednesday evening in solidarity with the Roma. Former Prime Minister Ferenc Gyurcsany said that in Hungary "there is no Roma problem, rather there is a Nazi problem."

Hungary holds the rotating European Union presidency until the end of June. The Hungarian government has been repeatedly criticized by its European partners for its authoritarian leanings and for its alleged censorship of the media.