During his apex, I briefly considered donating a votive plaque in Jörg Haider's name for all the work he unwittingly sent my way. As he drove the country into crisis, I got the chance to write about it. When Austria, a country of tired consensus, sleepily belched an extreme right wing movement into existence in the late 1990s, it grabbed the world's attention.

More recently, my gratitude has gone to Heinz-Christian Strache, Haider's present-day successor as leader of the right-wing populist Freedom Party of Austria (FPÖ), and to Norbert Hofer, the party's candidate for the presidency. Just over a week ago, the soft-speaking, staunchly conservative Hofer -- with his walking stick and the pistol he always carries with him -- won fully 35 percent of the vote in the first round of presidential elections. It was far more than the 24 percent pre-election surveys had predicted and once again, the world was rudely awoken.

The story is not new, but the setting is. The far right is surging throughout Europe. Austria is surrounded by post-communist states in various stages of transition into autocracy. They refuse to cooperate with the EU in solving the migrant crisis, yet happily accept transfer payments as a kind of compensation for the decades spent under communist rule. The European Parliament is becoming filled with right-wing extremists and anti-European nationalists while Germany is facing the rise of the AfD, France is facing Marine Le Pen and Britain is facing Brexit.

In Austria, the FPÖ is politically stronger than ever before. Hofer's 35 percent constitutes the party's best result in a national election: Haider never achieved more than 26.9 percent and Strache has never topped 20.5 percent. If Hofer wins the second ballot on May 22 and Strache emerges victorious the next general elections, Austria would be completely in the hands of the extreme right for the first time. Austria, isle of the blessed, in the hands of nationalists and anti-Europeans? Unthinkable, surely?

This curious country stepped out of its post-war idyll for the first time in 1986 when Kurt Waldheim was elected federal president despite his history as a Wehrmacht officer in the Third Reich. The country was foregoing decency just as the world was looking more closely. "We Austrians elect who we want" was the defiant slogan of the time. I explained in the foreign media that there weren't yet any brown-shirted masses marching through the streets.

Grinning under the Red-White-Red Flag

Waldheim's election marked the end of the broad Austrian consensus, which included silence about its participation in the Nazi regime and agreement about the country having been Hitler's first victim. Jörg Haider's rise began with Waldheim. The Iron Curtain fell in 1989 and Austria's geopolitical situation changed; in 1995 the country joined the European Union.

Europe became interested in Austria a second time after Christian Conservative Wolfgang Schüssel formed a governing coalition with Haider's FPÖ in 2000. Haider's xenophobia, hatred of minorities and disdain for artists was new and terrifying. I explained in the foreign media that there weren't yet any brown-shirted masses marching through the streets.

Haider pulled out of the coalition a short time later and then demolished his own party, the FPÖ. He left to start a new right-wing party, but Germano-nationalist combatants surrounding Heinz-Christian Strache remained. Initially underestimated as a mere Haider clone, Strache kept the FPÖ on its patriotic Austrian course. He did not, however, distance the party from the country's Burschenschaften, those far-right student groups roughly akin to fraternities in the US or student societies in Britain. The annual Academics' Ball in Vienna used to be organized by the Burschenschaften, but now it is an occasion where the semi-VIPs of the European extreme right dance with the full-VIPs of the FPÖ.

Strache grinningly waves the red-white-red flag of Austria at every opportunity; he had one in his hands even on election night. But the connection between the party and the Austrian nation remains unclear. The party is dedicated Austria über alles, but many of its supporters seem even more devoted to the greater German nation. Yet the country's constitution -- which the president is charged with defending -- clearly forbids annexation with Germany.

All this makes up the undercurrent of the conflict. Hofer promotes a system of Swiss-style direct democracy, but also thoroughly sympathizes with Orbán and Putin -- and with Marine Le Pen, of course, as well. The position of president thus proves to be problematic -- because it encompasses authoritarian potential. In the constitution of 1920, largely written by the famous constitutional lawyer Hans Kelsen, the role of president was effectively that of being the country's notary. Reflecting the pre-fascist era, the Christian Conservatives gave the office more weight in 1929; inspired by the German Imperial President Hindenburg, the Austrian presidency was granted absolute powers. Now the president was to be directly elected by the people and responsible for naming the chancellor, ministers, judges, and high-ranking officials. Additionally he became commander in chief of the federal army.

The Second Austrian Republic's post-World War I declaration of independence says the country was to be modelled on the spirit of the 1920 constitution. The federal presidency, however, remained as it had been in 1929. Until now this has never been a problem as all presidents respected the constitution and never tested their powers. The situation now looks different. Candidates from the Social Democratic Party of Austria (SPÖ) and from the conservative Austrian People's Party (ÖVP) received a combined 22 percent of the vote in the first round of the presidential elections, not even two-thirds of Hofer's result.

Those in the governing grand-coalition know they are themselves to blame for the debacle. First, the two parties in the coalition -- the SPÖ and the ÖVP -- should have put forward better candidates. Those nominated were little more than stopgap solutions. Second, the situation is peculiar. The economic data is positive and there can be no talk of social upheaval. But the two parties have ruled together for too long. The voting public has grown tired of the same old messages from the same two men who continually get in each other's way while merrily calling: "Let's do it!"

Third, the refugee crisis has played into the hands of chauvinists. It is almost as if the government and right-wing opposition are in a competition to see who can destroy European Austria quicker. This frenzy is accompanied by the triumphant howling of the powerful tabloid newspapers, which have joined in the attacks on the government. "Seal Off Austria!" read one memorable headline in the Kroner Zeitung newspaper.

Fourth: Europe. The resurrection of border checks on the Brenner Pass shows a distressing amount of historical indolence. The blocking of the Balkan route in cooperation with Balkan states not bound by EU laws was celebrated in Austria as a triumph over Angel Merkel's "welcoming culture."

One can understand the concerns of a small country that takes more than its share of refugees and feels abandoned by the other EU member states. But instead of using the crisis to build up an effective EU border protection regime, those in government have preferred to play the national card prior to the European card.

The lengthy grand-coalition has led to political paralysis. Platitudes about carrying on, cooperation and consensus have corroded all political distinctions. The nth tightening of the right to asylum has ultimately benefitted Strache more than the government.

Strache and his gang have only needed to offer slogans about drastic measures, national pride and "Austria first" to seem like fresh faces who can finally bring about change. The fact that his colleagues first became well known for their involvements in nepotism and corruption scandals -- the collapse of the Hypo Alpe Adria Bank in Carinthia, which cost taxpayers billions of euros, is a prime example -- seem to have been forgotten.

Norbert Hofer wants to make the most of his presidential role. He has said that people will be amazed by all that is possible. Yet his first debate with his opponent last week, the Green Party economist Alexander Van der Bellen, saw them both painstakingly seeking to avoid open conflict.

The Austrian malady seems as extant as ever. There are problems, but they are wrapped in the bubble wrap of consensus. Foreign powers are warning of authoritarian, pre-fascist developments? That will only benefit Hofer: We Austrians elect who we want. Parties recommending against voting for Hofer? That would only motivate his opponents.

This accommodating brand of politics paralyzes one half of the FPÖs opponents, while the other resorts to alarmism and warnings of Bonapartism, the Third Republic or Orbánistan. It should be remembered that Austria is distinct from Hungary and Poland by way of its strong civil-society institutions -- and that the Social Democratic mayor of Vienna, Michael Häupl, beat Strache in fall 2015 communal elections by campaigning on the defense of human rights.

This election will be close. Van der Bellen is almost 13 percentage points behind Hofer. The ÖVP has refused to recommend one candidate over the other -- indeed, many in the party are unopposed to governing together with the FPÖ. The SPÖ is hemming and hawing, but it is already joined with the FPÖ in a governing coalition in the Austrian state of Burgenland. Many of its top politicians have spoken out in favor of -- sshh! -- Van der Bellen. The chancellor and vice-chancellor both have an expiration date. And I am still happily explaining in the foreign media that there aren't yet any brown-shirted masses marching through the streets of Vienna.

Armin Thurnher, 67, is publisher and editor-in-chief of the Viennese weekly magazine Falter. He is also the author of the book "Republik ohne Würde" (which translates to "Republic without Dignity"), which takes an unflinching look at his country's political elite. 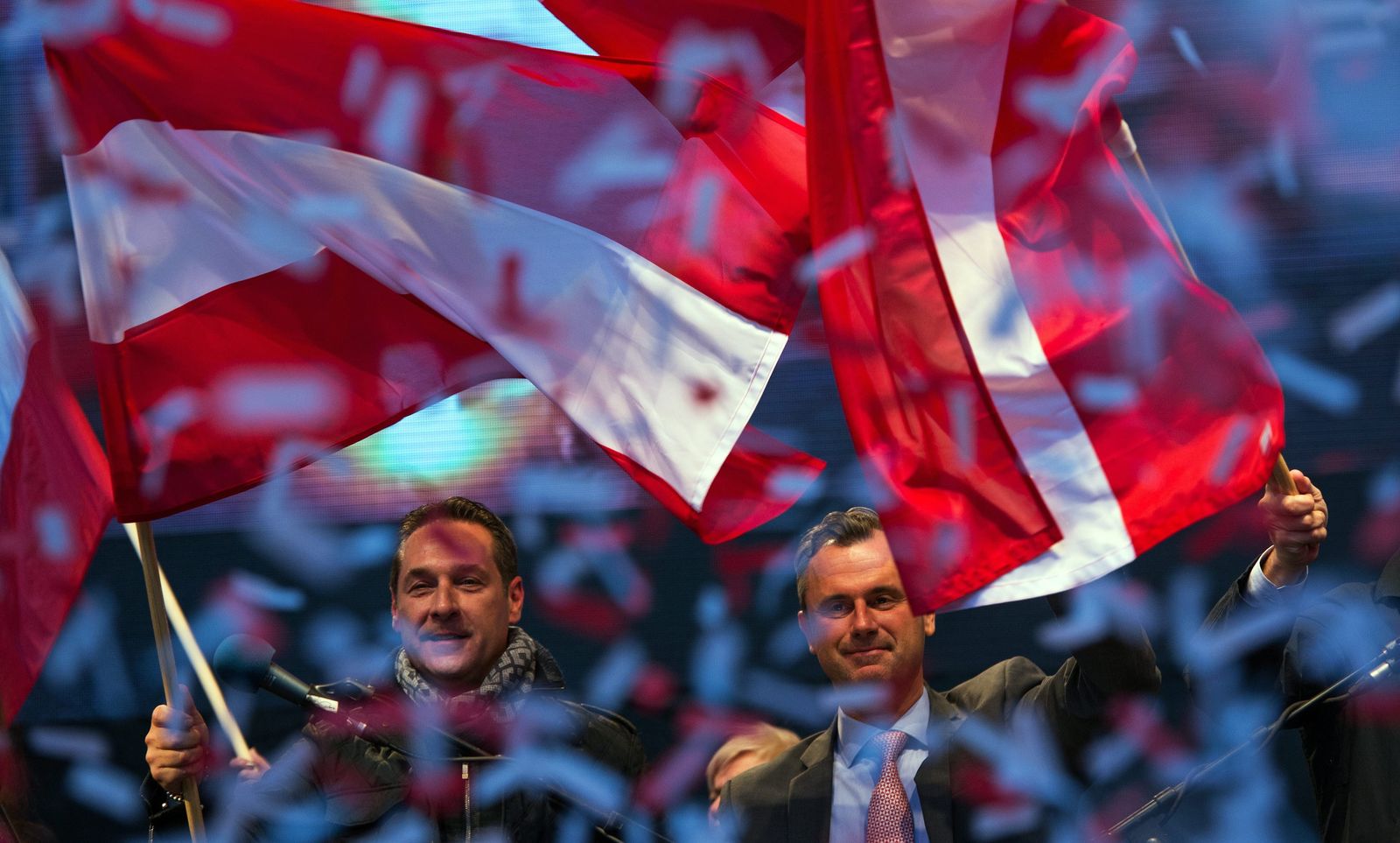