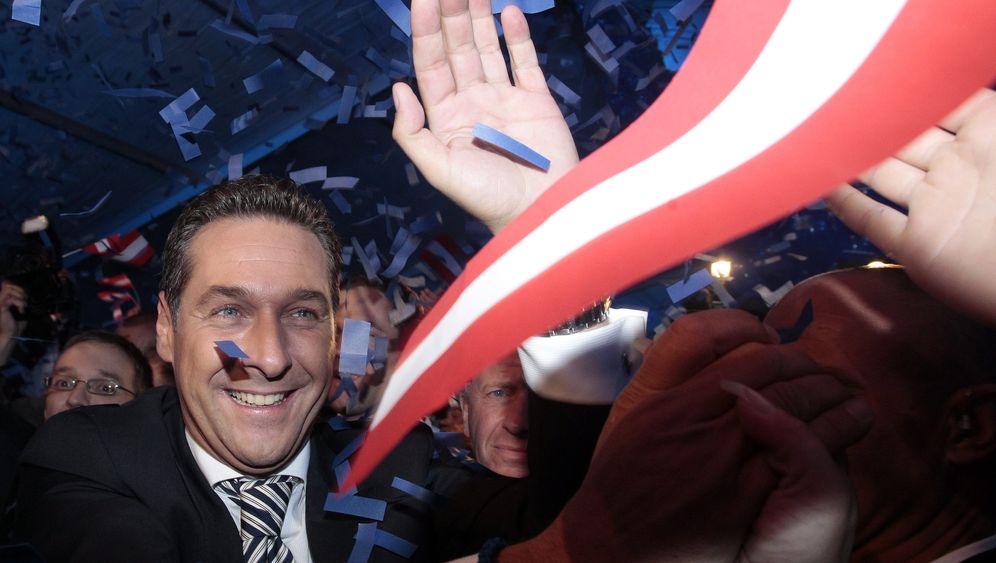 They aren't actually that far apart, the chancellor and his adversary -- at least in geographical terms. While Austrian Chancellor Werner Faymann runs the country from the Federal Chancellery on Vienna's Ballhausplatz square, Heinz-Christian Strache meets with visitors five minutes away at his office in a palace, which has a view of the city's rooftops.

The leader of the right-wing populist Freedom Party of Austria (FPÖ), Strache has steel-blue eyes and looks dashing in a dark suit. He is not someone who shies away from selling pipe dreams as prophecies. "As chancellor," he promised in June, he plans "not to do everything differently" but to "improve many things."

In his choice of words, Strache sounds out of touch with reality. Given that he is the nightmare of Austria's major parties, the center-left Social Democratic Party of Austria (SPÖ) and the center-right Austrian People's Party (ÖVP), who does he intend to govern the country with? "That'll work itself out," he says. "After the next elections, different people will be in charge" in the SPÖ and the ÖVP.

Polls now place Strache's FPÖ consistently neck and neck with the two "old parties," and in May it was even the top choice among voters. Strache is already telling people that if he comes into power, the country will no longer pay a cent for "bankrupt EU countries like Greece" because, for someone like him, "the red, white and red shirt" -- a reference to the colors of the Austrian flag -- "is tighter than the Brussels straitjacket."

A Statesman in Waiting

The next election is in 2013. Is it pure Angstlust if, in the city of Sigmund Freud, newspaper editors are already fretting about the possibility of Strache becoming chancellor? Or do people want to nip the development in the bud, as some kind of democratic early warning system?

Strache was tied to the neo-Nazi community in the past and was forced to admit that he took part in militia training. Today he paints himself as a statesman in waiting and only rarely sends out signals to like-minded individuals -- such as when, during a visit to Israel's Yad Vashem Holocaust memorial in December, he wore a cap that identified him as a lifelong member of the right-wing student fraternity "Vandalia" instead of a Jewish skullcap.

At its convention in June, the FPÖ renewed its commitment to the German ethnic community, boosting Strache's right-wing credentials even beyond those of his mentor, Jörg Haider. The former FPÖ leader, who died in a car crash in 2008, had committed himself to Austrian patriotism before he died. Strache says that it was Haider's historic achievement to have destroyed the system of cronyism promoted by the SPÖ and the ÖVP. But Haider, according to Strache, was also responsible for the FPÖ's original sin: its entry into a coalition government under former ÖVP Chancellor Wolfgang Schüssel in 2000.

At the time, the European Union responded to this step by ostracizing Austria diplomatically. Now, 11 years later, the FPÖ has reached the same voter-approval rating it had during Haider's heyday -- 27 percent. This comes as no surprise, says Strache. "A culture war is raging in our country, and we are leading the debate."

In his office on nearby Ballhausplatz, the current chancellor takes a relaxed view of all this. The photogenic Chancellor Faymann embodies contemporary Austria as the land of smiles, invoking the spirit of composer Franz Lehar, who wrote an operetta of the same name. "Always smile and always be cheerful," is a line in one song. It could be Faymann's motto.

How does he do it? Faymann's campaign coach, the mime Samy Molcho, once wrote in the weekly magazine Falter: "You have to smile and exhale at the same time, or else your smile will turn into a mask." Perhaps this explains Faymann's impassive approach to the malice that is currently being showered on a government that now seems to be focusing on governing itself rather than the country.

"Our politicians are too idiotic and cowardly, and too ignorant," Andreas Treichl, head of Austria's largest bank, Erste Group, said in May, referring to what he perceived as a lack of economic competence. Gerd Bacher, the former director of Austrian broadcaster ORF, complained about a "despotism of little minds" and a "massive blockage when it comes to major reforms."

Strache and his friends like to hear this sort of thing. They are now riding a wave of popularity, with their approval ratings rising almost without the party even having to do anything. All they have to do is stand still and be carried along in the wake of the current trend. The successes of right-wing populists in countries like Finland and France play into the hands of the euroskeptic FPÖ.

"Populism thrives in difficult times. It's a phenomenon we see throughout Europe," says Laura Rudas. Already a senior SPÖ politician, she is just 30 years old and patronizingly referred to as a "hot chick" in Viennese political circles. She is seen as a supporter of the Social Democratic chancellor who is loyal to party principles but not known for her subtlety. If Austria is the land of smiles, then Rudas is responsible for the plain-speaking.

Can she explain why Strache, who was once responsible for anti-Islamic election posters and who now berates the Austrian chancellor as an "acolyte of the EU sect," is on his way to making the FPÖ into Austria's strongest party?

It isn't because of the Social Democrats' weak identity, says Rudas. "We stand for distributive justice, for educational justice and financial market controls. We can only implement these things through the direct mobilization of citizens," she says, as if rattling off a campaign brochure text. "You might say that, in this regard, we're 'back to the roots,'" she adds, using the English expression.

Historian Gerhard Zeilinger wrote in the liberal daily Der Standard that the SPÖ "has thrown its principles and party platform over board for years in favor of a cheap, supposedly vote-getting populism." Rudas denies that this is the case. Like many others, Rudas experienced her political awakening during the anti-Haider protests and then worked her way up the ladder.

Many important SPÖ figures -- including the new government spokesman, the chancellor's foreign policy adviser and the SPÖ leader on the powerful foundation board of the public broadcaster ORF -- are in their mid-20s or early 30s. They are alert, networked and determined to rescue the legacy of the deeply traditional Austrian workers' movement by bringing it into the age of information technology.

After work, the young Austrian leftists head for the hip section at the back of Vienna's famous Naschmarkt market or the Procacci Restaurant near St. Stephan's Cathedral, where diners pay €26.50 ($37) for linguini with crawfish and are relatively safe from Strache's down-to-earth followers.

'A Bunch of Young People'

Niko Pelinka denies the charge that a small group of clever, up-and-coming apparatchiks are shaping policy while ignoring the problems of ordinary citizens. He says: "We just happen to be a bunch of young people who shook things up at some point and then got together."

Pelinka, 24, is the most powerful man on the supervisory board of state broadcaster ORF. As the spokesman of the "Friends" of the SPÖ, he will play a pivotal role when the next director is chosen on Aug. 9. Gerhard Zeiler, CEO of the German media company RTL Group, an executive with international standing, has already expressed interest in the position. However, the office of Chancellor Faymann has already made it clear that the current director, Alexander Wrabetz, also an SPÖ member, should be given preference over his cosmopolitan counterpart Zeiler. It's as if star football player Lionel Messi were willing to play in Austria for a fraction of his current salary and yet was rejected, wrote the newspaper Salzburger Nachrichten.

In an open letter written at the end of last year, senior ORF journalists complained that their station's image was being harmed as a result of "politically motivated agreements." The complaint was directed at all parties, at the old system of proportional representation and cronyism that Haider once declared war on and that Strache is now bombarding with even coarser ammunition.

Faymann isn't exactly discrete in the way he deals with the media. He already owes his capture of the chancellorship three years ago to the support of his now-deceased patron Hans Dichand, the grand seigneur of Austria's largest newspaper, the Kronen Zeitung, which is critical of the EU. It also didn't hurt that the publisher of the free paper Österreich is Faymann's boyhood friend and that the managing director of the Heute newspaper is his former press spokesman.

Together, the three papers reach 4.3 million readers a day, or more than half of all Austrians. Not surprisingly, they are replete with ads by SPÖ-run government agencies, even though the majority of articles, in terms of tone and content, tend to correspond to the worldview of Strache voters.

Nevertheless, Faymann and the SPÖ benefit from some of the reporting, including headlines like one in Heute that read: "Schwarzenegger visits Vienna, and raves about schnitzel, Kaiserschmarrn -- and our politicians," next to a photo of Faymann, all smiles, standing next to the Terminator. It doesn't surprise anyone in Austria that Kaiserschmarrn, a traditional Austrian desert, gets higher billing than the chancellor. The line between court reporting and malice is traditionally a narrow one.

Politicians ought to show authority, but instead they "practically run into your arms," scoffs the domestic politics editor at the Kronen Zeitung. "The scary thing about this administration is that they're getting nicer and nicer."

Until a few days ago, an exhibition on the outskirts of Vienna reminded visitors of a time when social democratic rule went almost unchallenged in the country -- the time of the statesman Bruno Kreisky, who was chancellor of Austria from 1970 to 1983. To commemorate his 100th birthday, an exhibition at the massive Karl-Marx-Hof building -- a historic apartment complex that is highly significant to Austrian social democrats -- was dedicated to the socialist many Austrians still worship as the "sun king."

Kreisky, who in 1970 led a minority government that relied on the support of the FPÖ, which at the time had the reputation of being a hotbed of former Nazis, never lost sight of ordinary voters. To this day, he is still quoted as saying: "You have to like the people."

Kreisky's words sound like an admonition to his political heirs. Indeed, at the Karl-Marx-Hof building, the heart of red Vienna, Strache's FPÖ already captured more than a quarter of votes in the last election.