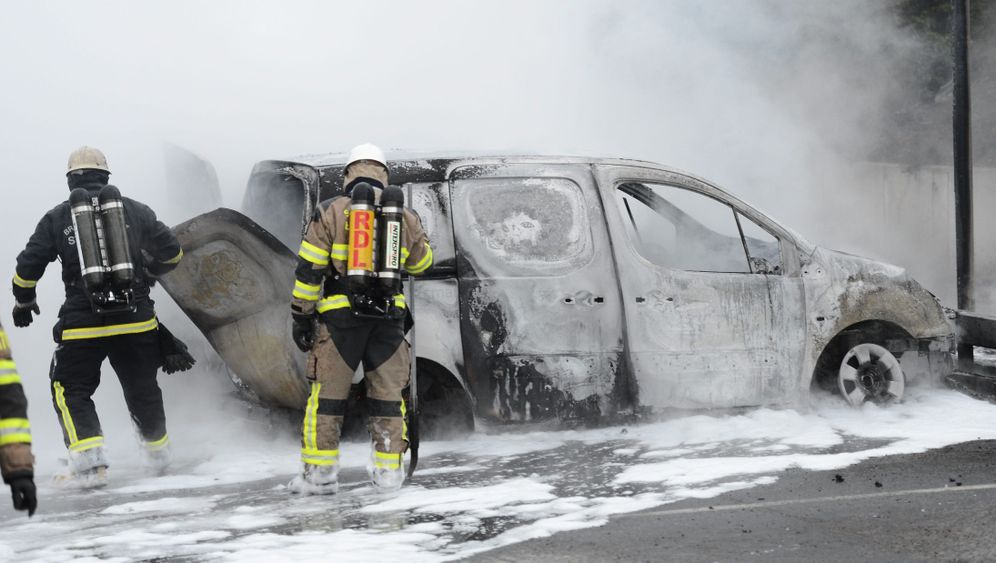 It hasn't taken long for such images to seem almost normal: In the Stockholm suburb of Husby, six cars stood in flames as some 400 people looked on when the fire department arrived to extinguish the fires on Thursday. "We are receiving reports that there are a lot of people there," a police spokesman told news agency TT as the situation developed.

It was the fifth consecutive night that the Swedish capital has been wracked by rioting. Other suburbs, too, saw rampaging youth on Thursday night. Three cars were lit on fire in Norsborg while a police station was set alight in the suburb of Aelvsjoe. Police reported that two schools were attacked by arsonists elsewhere.

The violence followed the pattern set on previous evenings this week, which included burning cars and attacks on police stations. "Here we have a group of young men who believe they can and should change society with violence," said Swedish Prime Minister Fredrik Reinfeldt at a Tuesday press conference. On Wednesday he added that setting cars on fire "was not an expression of freedom of opinion but rather one of hooliganism." Sweden, he said, "is a country that welcomes large groups of people from other countries and I am proud of that."

His disgust with the ongoing violence is difficult to ignore. But for the young men involved in the rioting, the message is a different one. Finally, they are being talked about, and that gives them a sense of power.

"At least everyone is listening to us now," one 20-year-old told Swedish broadcaster SVT. Born and raised in the suburb of Husby, he speaks a harder dialect of Swedish that is different from those who can afford to live in the center of Stockholm. He admits that burning cars won't solve problems and that the violence has given Husby a bad name. But, he adds, "we just want to say: Treat us like the rest of Sweden. We want to be treated like everyone else."

'Didn't Surprise Me at All'

The unrest began in Husby, but it has since spread to several other suburbs around Stockholm. On Wednesday evening, there were cars burning in 15 different places in and surrounding the capital, according to the paper Dagens Nyheter. The fire department was called out 90 times, the paper reported, with 12 youth taken into custody, six of them with prior records.

For many, of course, the image of Sweden in flames is a surprising one. Outsiders tend to associate the country with wealth, order and bucolic beauty.

Others, though, have a more realistic view of the Scandinavian country. "Husby didn't surprise me at all," says Jerzy Sarnecki, a professor at the Institute of Criminology at Stockholm University who previously worked with delinquents at a youth center. He points out that this isn't the first time Sweden has seen such unrest, even if it has been some time since the violence was quite this intense. "We have places in Sweden like Husby -- they exist elsewhere too, like in France and England," Sarnecki says.

London was hit by riots most recently in the summer of 2011, whereas Paris' last confrontation with similar unrest was in the winter of 2007. The problems fueling the violence are similar. Husby has a population of some 11,000 people, and 80 percent of them have foreign roots, a reflection of the fact that in recent years Sweden has been a top destination for those coming to Europe from abroad.

Unemployment in the quarter is twice as high as it is for the whole of Stockholm. Sarnecki uses the term "urban underclass" to describe young people who are jobless and lack a good education -- those who feel excluded by society. "They know that they don't have a radiant future ahead of them. And they are filled with rage against the established society," he says.

That rage is now being discharged. The trigger was likely an incident that took place last week. Police shot and killed a 69-year-old man who they said had threatened them with a machete. The exact circumstances of his death, however, remain unclear. Police said in an Internet statement that he died in the hospital, which turned out not to be true. A police spokesman told the daily Svenska Dagbladet that he regrets the error.

But the youth organization Megafonen, which is also active in Husby, believes that the misinformation was intentional. In a message posted on their website, they wrote: "If what happened to Karl-Eric, 69, had taken place in Kungsholmen, it would have been a scandal." Kungsholmen is a prosperous quarter in central Stockholm. The youth activists called for a demonstration "to stop police violence in our suburbs."

The 20-year-old who spoke with broadcaster SVT said that "we feel like we are being harassed by the police," who frequently perform checks and drug searches. "You accept this shit repeatedly, but at some point you've had enough," he said.

Amid the rioting, some say police are using excessive force now too. Sarnecki, for his part, declines to pass judgement. "What I can say is that the police are faced with a difficult task," he says. They have to be diplomatic and attempt to establish a dialogue, not just with those throwing the rocks, but also with neighbors, parents and other youth, he adds.

'Come and Speak with Us'

Some have already sought to start the process. One Swedish fireman published a letter to the rioters on his Facebook page. "Last night, you threw rocks at us," he wrote. "I am there when your father needs help, when he has a car accident. I help your sister if there is a fire in the kitchen. I jump into the water to help your brother when he has fallen out of a boat, even if the water is ice cold. Why are you treating me like this?" The letter has received a wide audience. In addition, a group for young women called Streetgäris called on Wednesday evening for a peaceful demonstration. "We want everything to calm down again," a member of the group told Swedish television.

And what then? The unemployment rate in the Stockholm suburbs is not going to sink rapidly, nor will the residents of Husby suddenly be able to afford an apartment in Stockholm.

One young man involved in the riots, though, seemed to indicate that his wishes are not all that difficult to fulfill. In comments to a Swedish journalist, he said: "We would like politicians to come here and speak with us." 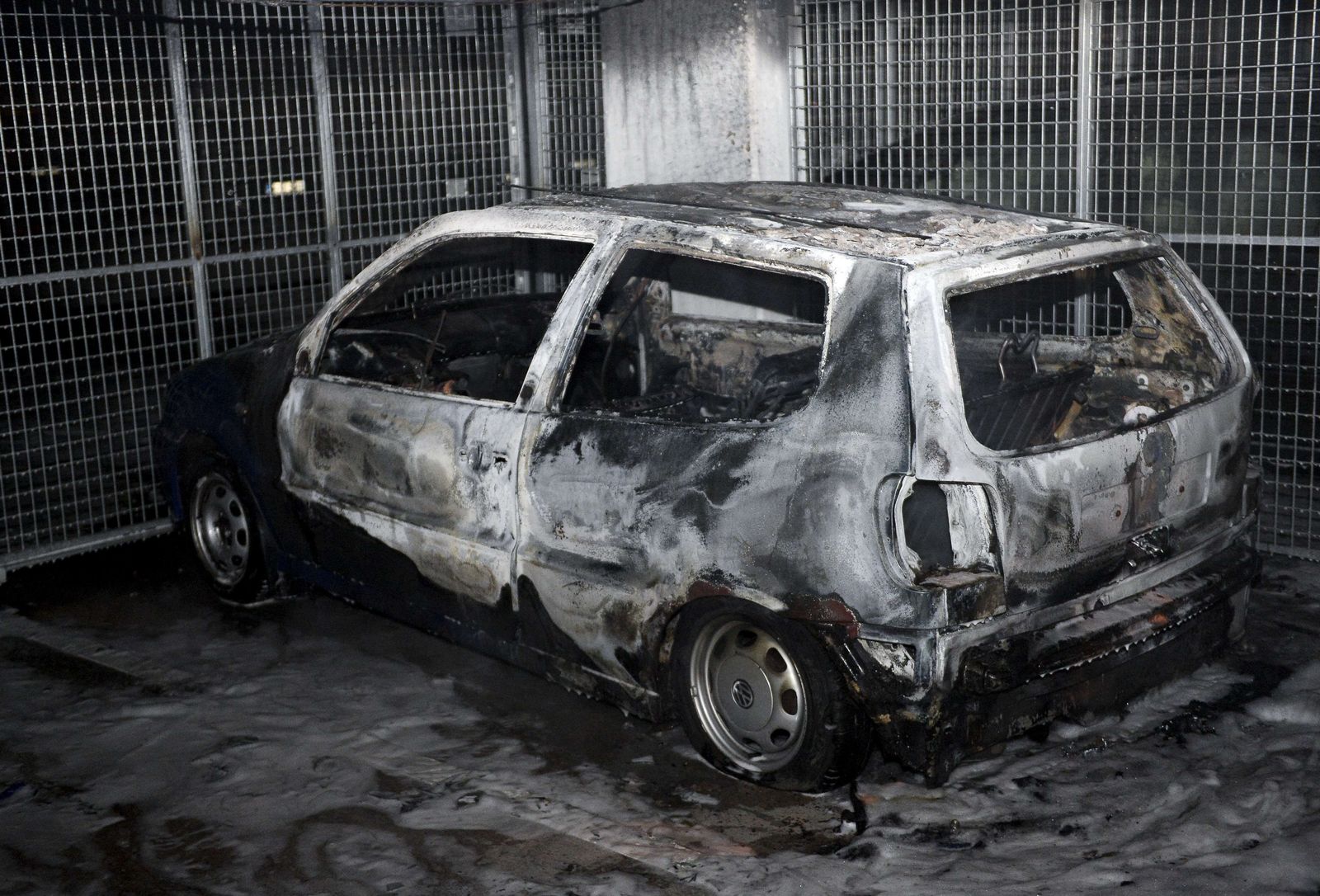 Police says two schools and 15 cars were burned on Thursday night, according to the Associated Press.