Chancellor Angela Merkel, not known for taking gambles, has agreed to a full parliamentary vote on Wednesday on the planned leveraging of the euro rescue fund in a move that could strengthen her hand in EU negotiations on rescuing the euro -- but could also backfire.

Her conservative Christian Democrats (CDU) agreed on Monday to opposition party demands to hold a full vote rather than confining parliamentary involvement to a budget committee vote, as originally planned.

The decision is also aimed at allaying concerns within her center-right coalition that building up the fund could entail a greater risk to German taxpayers than the €211 billion in guarantees they have already committed.

While Germany's share of guarantees in the enlarged fund, known as the European Financial Stability Facility (EFSF), is set to remain unchanged, there are fears that the leveraging plan might make an actual payout of that money more likely, said Volker Kauder parliamentary group leader of Merkel's conservative Christian Democrats (CDU) and their Bavarian sister party, the Christian Social Union (CSU).

"Fundamental questions should be decided in parliament. With such important issues it is good if the parliament gives broad backing to support the chancellor in negotiations," Kauder said.

German parliamentary involvement in euro bailout measures, whether via budget committee approval or a full vote, meets a requirement set by the Federal Constitutional Court, which ruled last month that legislature's sovereignty in budget questions needed to be protected.

The need to secure parliamentary approval has held up the EU talks aimed at reaching a new agreement to fight the crisis with a beefed-up EFSF, a major debt cut of up to 60 percent for Greece and a program to recapitalize European banks.

Clear backing from Germany's parliament, the Bundestag, would strengthen Merkel when she travels to Brussels on Wednesday afternoon for the second EU summit to finalize the agreeent. It would also force the German opposition parties, which have fiercely criticized her crisis management, to show where they stand.

Rebellion Could be Greater

But the notoriously cautious chancellor is running a risk with the vote because a number of parliamentarians from her center-right coalition will vote against her, just as they did in the initial vote on Sept. 29 to enlarge the EFSF's lending capacity to €440 billion. She struggled to contain that rebellion and managed to muster the symbolically important absolute majority of all seats in the Bundestag, even though 15 parliamentarians from her governing coalition refused to back her.

The rebellion could be greater this time around, and she faces the same pressure to reach an absolute majority, even though only she technically only needs a simple majority -- more "yes" votes than "no" votes.

How united will her ranks be this time? No one knows. Wolfgang Bosbach, a CDU lawmaker who voted against the EFSF expansion and resisted intense pressure to change his mind, has already said he will again vote "no". "The critics' concerns haven't been removed, but have rather been confirmed," he said. And maybe they have spread further.

So Merkel can't be completely sure how the vote will turn out. If the mutiny is no greater than 19 lawmakers from the conservatives and their junior coalition partner, the Free Democratic Party (FDP), her absolute majority will remain intact.

Parliamentarians have complained that they don't have enough time to study the highly complex plans discussed by EU leaders at their first crisis summit on Sunday to boost the EFSF through leverage. Documents outlining the plan arrived in Berlin from Brussels on Monday evening, in English, and will be discussed by lawmakers at meetings on Tuesday.

"The aim is to increase the efficiency of the way the EFSF is used and thereby to maximize the lending capacity of the EFSF," the German Finance Ministry said in a statement to the parliamentary budget committee obtained by the German news agency DPA.

Euro-zone member states are currently discussing two possible options for leveraging the EFSF: a partial guarantee for new bonds issued by highly indebted countries, and a special loan fund furnished with money from the International Monetary Fund and countries outside the euro zone. A combination of both options is also possible.

But the German government concedes that this leveraging is highly complex to put into practice and that detailed talks will be needed with market participants and rating agencies.

The opposition Social Democrats and the Greens have yet to decide how they will vote on Wednesday. In September, the two parties backed the expansion of the EFSF. But should they elect to block the leveraging plan this time around, it would make Merkel even more reliant on her own coalition in parliament.

Meanwhile, the leader of the euro rebels in the coalition, FDP lawmaker Frank Schäffler, reiterated his demand that Greece should leave the euro zone. "Greece can no longer become competitive inside the euro," Schäffler said. The EU summit should decide a major debt cut for Greek creditors, but to prevent other nations from following suit, Greece should be evicted from the currency bloc -- as a deterrent to others, he said. 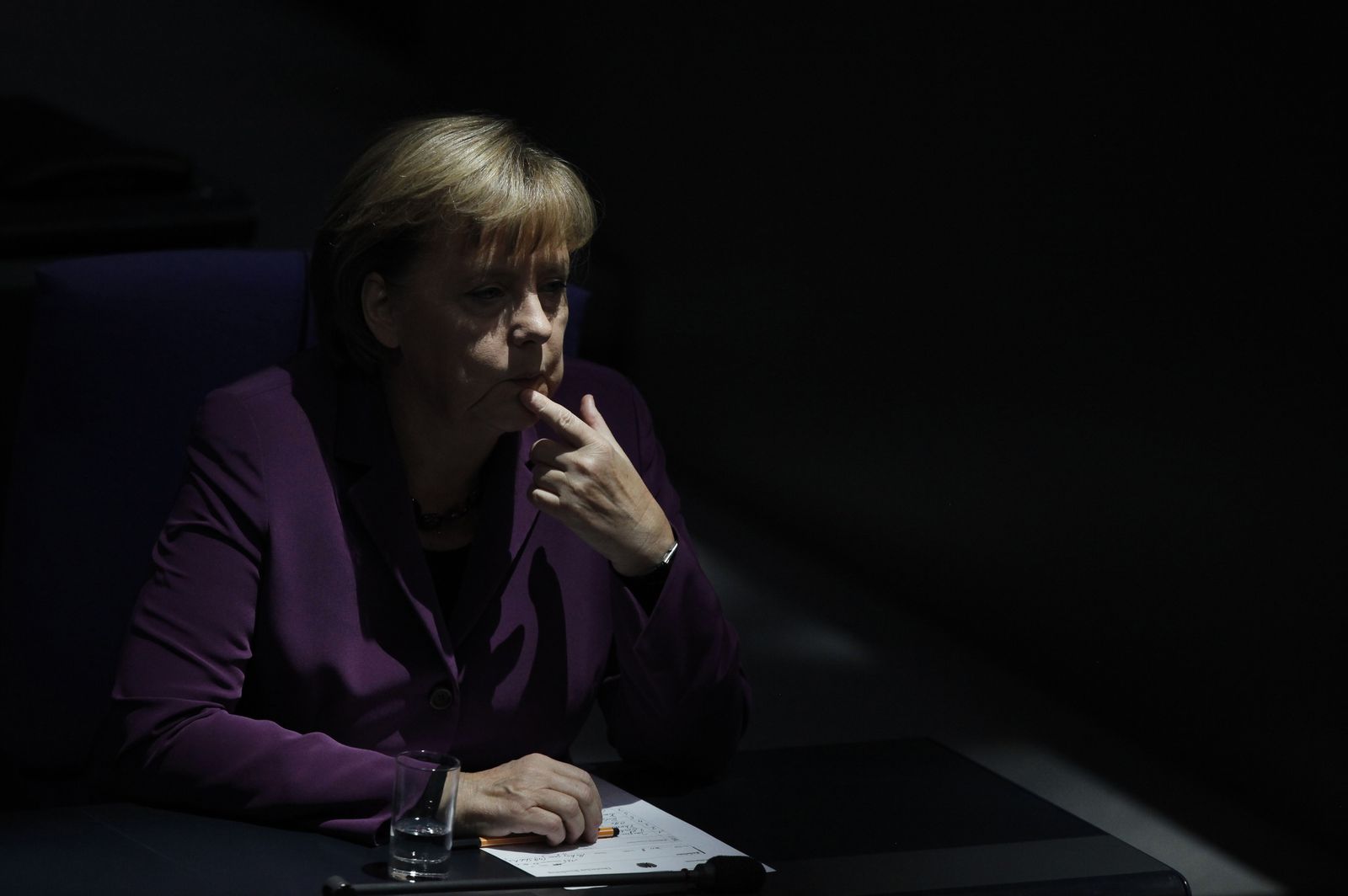 German Chancellor Angela Merkel, not known for taking risks, has allowed her party to call a full parliamentary vote on the euro rescue fund -- the second in less than a month.