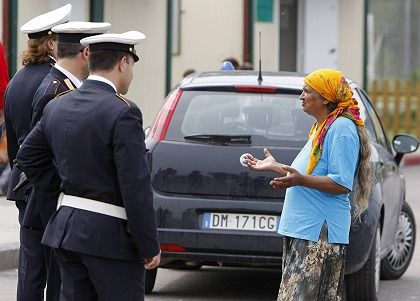 Italian police officers at a Roma camp in Rome after 50 men were taken away during a raid on Thursday.

Italy's new center-right government is flexing its muscles on the issue of illegal immigration just a week after taking office, spurred by a number of attacks on Roma people this week. Police announced on Thursday they had carried out a number of arrests in a sweep that began on May 7 and deported several illegal immigrants from the country. And on Friday, Italian Interior Minister Roberto Maroni, a member of the anti-immigrant Northern League, promised to take action to bolster security in the country.

The government is responding to Italian concerns about immigrant crime. Rome claims it is not identifying any specific groups, but so far the crackdown has been largely focused on the Roma people, who mainly come from Romania and other Eastern European countries.

That fear is now erupting into violence. Earlier this week Roma camps near Naples had to be evacuated after local people torched the shacks, angered by reports that a teenage Roma girl tried to kidnap an Italian baby. Her arrest at the weekend sparked days of bitter protests, and on Wednesday night vigilante groups in the Naples suburb of Ponticelli chased Roma out of two squatter camps by throwing Molotov cocktails into their huts.

On Friday, Maroni announced that a new law-and-order package was to be launched next Wednesday. Speaking at a ceremony marking the anniversary of the foundation of the Italian Police Force, he said his new measures would prevent "rage prevailing over civilized co-existence," the Italian news agency ANSA reports.

On Thursday police officers carried out raids on a Roma camp in Rome and detained over 50 Bosnian and Romanian immigrants without proper papers. Speaking at the same ceremony as Maroni on Friday Italian Police Chief Antonio Manganelli said that "only by blocking the entry into Italy of people who refuse to integrate, people who import crime, will we be able to help ease the fear that has crept across swathes of our country."

Silvio Berlusconi's new government had made improving public safety a key election pledge following a number of high-profile crimes, many involving Roma people from Romania. The rape and murder of a naval officer's wife last October led to the deportation of dozens of Romanians deemed a threat to public security.

Maroni's Interior Ministry is planning to boost resources for policing and adopt a firmer line on illegal immigration, although there has been some criticism that the proposed measures could violate EU law. One such proposal would make illegal immigration a criminal offense punishable by up to four years in prison. Rome is also considering extending the detention time for recent immigrants from two to 18 months and carrying out DNA tests to prove family links. Maroni also envisages reintroducing passport controls at the Italian border, despite the country's membership in the European Union's passport-free Schengen zone.

Maroni met with his Romanian counterpart Cristian David on Thursday to discuss cooperation on the crime issue. Romanian Prime Minister Calin Popescu-Tariceanu warned this week that Italy's crackdown could cause "xenophobia" against other Romanians. At a news conference after Thursday's meeting David said that his country was eager to work with Italy on security. "Romanians who live abroad must respect the laws of the host country," he said, adding: "I would like to emphasize that the majority of this community is perfectly integrated." Maroni sought to reassure David that Italy had no intention of discriminating against Romanians, saying: "There is no Romanian community problem in Italy -- there is a security problem."

However, other right-wing politicians have been less circumspect. Milan's conservative deputy mayor, Riccardo de Corato said on Thursday "People who want to work are welcome in Milan, but if you want to beg, go and do it in Bucharest." And Northern League leader Umberto Bossi, who is prone to using anti-immigrant rhetoric, told reporters "People do what the political class can't manage" in reference to the mob attack on the Naples settlement.